We're seeing this in action every single day

IOTWReport points out that the preoccupations of the US mainstream media do not (to put it mildly) reflect the real concerns and priorities of the average American. 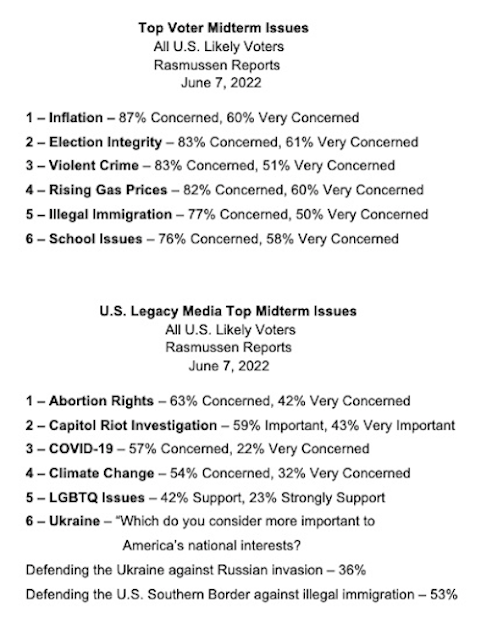 That's something one can't help but notice.  The issues the news media are hounding to death, emphasizing again and again in their broadcasts, are not the issues that are most important to their listeners.  As a result, most people I know no longer pay any attention to news bulletins.  They have them on in the background while they talk about other things that are more important to them.  Now and then they may pause their discussion to watch a particularly interesting news clip, or listen to a news flash, but most of the time they're not paying attention at all.  Indeed, when some pet themes such as LGBTetc. issues crop up, most people seem to get actively annoyed.  Some of their comments are of a nature I can't reproduce in a family-friendly blog like this.

This is what happens when partisanship in the media triumphs over their mission.  The New York Times' famous slogan, since 1896, has been "All the news that's fit to print".  Nowadays, it seems to mean nothing more than "All the news that we decide to print, whether you think it's important or not.  Consume what we dish up, peasant, and don't argue!"  Not just the Gray Lady, but almost all news media appear to be following that standard.

Furthermore, the concentration of media ownership means that news stations parrot each other, so that getting genuine news and an independent viewpoint is almost impossible.  Observe:

Add that to the media's refusal to concentrate on news that its listeners and viewers actually prioritize and want to hear about, and you have a recipe for terminal irrelevance.

I'll be interested to see how the non-stop drumbeat from the news media about "their" issues plays out in the November elections.  I'm pretty sure people will cast their ballots based on what's really important to them, rather than what the media want to persuade them should be important to them.

I watch the local news. I mute it when they cover the national drivel.
And I watch the weather.

I occasionally watch Greg Gutfeld, but that's about it for anything national unless hubby wants it on.

And I watch RFD-TV for news that is more important to me.

What people fail to understand, and so fail to tell their congressdopes, is that NO ONE cares what congress thinks. We hire them to represent what WE think. They are just hirelings with ONE job: Represent OUR thoughts. A few years back a women was testifying before some idiot committee and she told those idiots that they had "forgotten your place." She was 100% on-target.

This is why there are teenagers who get more views on their hair and makeup tips than ABC Nightly news gets (see Dive Medics post a while back).

Cable news has significantly fewer viewers than even ABC News; newspapers are similarly dying - I think what we are seeing is the frenzied last gasp of these dying companies.