Geoff Hill, travel writer and humorist, visited Canada for three months, and wrote daily articles and commentaries for his editor back in Britain.  He later assembled them into a book titled "I could have been a stoker for a vertical wimple crimper". 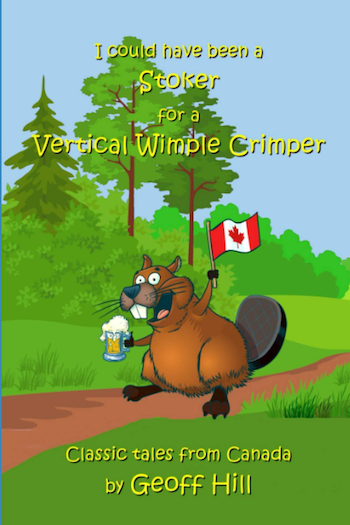 They're very funny, and I enjoyed reading them.  To whet your appetite, here are the first two stories from the book.

It wasn’t long before my first taste of what the Canadians call multiculturalism.

Before our Air Canada 747 to Toronto had even moved at Heathrow, Captain Bob Fox was on the intercom, apologising in English for the delay.

Like all airline pilots, Captain Bob had the sort of voice guaranteed to reassure you that everything was all right even if the plane was vertical and stewardesses were whistling past our ears.

After that, I was expecting instructions on how to put on a lifejacket in Romanian and a Serbo-Croat preview of the in-flight movie, The Rocketeer.

Since there was a splendidly exotic African chap sitting in seat 36B, presumably the movie would be available in Swahili with Urdu subtitles.

In fact it turned out to be appalling in any language. If you ever get a chance, don’t go to see it.

It was so bad that I listened to it in French on my headphones, but when that didn’t work, I tried the other nine channels until I got to The Barber of Seville, then ordered a pillow, a blanket, and hot towels by the gallon, and had a whisky for breakfast.

By the time I’d turned my watch back five hours to Toronto time and started reading Paul Thoreaux’s The Great Railway Bazaar, I felt quite hopelessly gaga. There’s a lot to be said for having whisky for breakfast five miles above the Atlantic while listening to Rossini and reading about Iran. And I hadn’t even started speaking to the two people on either side of me. He was plugged into Big Country on his headphones, and she was reading Ian McEwan’s The Innocent in paperback.

It was easy to imagine histories for them. He was in his mid-thirties, and where his wedding ring should have been, there was a faint band of white skin.

A Scottish engineer, he’d married a secretary from Luton. Five years later they went on a second honeymoon to Athens, where he accused her of flirting with a barman who looked like a slightly used Greek god.

In the tumult of recriminations which followed, she confessed to a fling with her bank manager, a married man in his fifties, a year after her marriage to the engineer.

At the engineer’s request, the firm had transferred him to Canada, and now he sat beside me on his way out, sadly nervous at the thought of flinging bridges over frozen gorges in the Northwest Territories.

At home, his wife was watching Eastenders and waiting for the phone to ring.

And the petite blonde woman on my right? She was the wife of the bank manager, of course, fleeing her husband after a spate of mystery phone calls and a hotel receipt found in a jacket pocket.

I should have introduced them, but my attention was distracted by page 88 of The Great Railway Bazaar, in which Thoreaux described a visit to the Kabul Insane Asylum to gain the release of a Canadian who had been put in there by mistake.

“He said he didn’t mind staying there as long as he had a supply of chocolate bars; it was better than going back to Canada,” wrote Thoreaux.

But it was too late. I was on my way, and there was no stopping now.

Walking out into the Canadian cold for the first time is the antithesis of stepping into a sauna. First you get the breathless wash of cold, then the inside of your nostrils collapsing.

I clutched my traumatised nose in both hands and stumbled to the taxi rank, where I found an ocean liner with wheels driven by a splendidly moustachioed Lebanese man called Simon.

Since the hotel was only about five miles away, I didn’t actually need to get into the taxi. I just put my luggage in the boot, walked around to the front of the bonnet, and there I was.

“How big is the engine in this thing?” I asked Simon as I handed him the contents of my wallet.

“Not so big. About five litres,” he said.

I checked into my room at the King Edward, had a Molson Export in the bar, and went out for a burger at a place called The Keg with Bill Jermyn, an Irish marketing consultant who’d moved to Toronto when the fleshpots of Cork had somehow palled on him.

By the time we got there my moustache had taken on the consistency of Shredded Wheat which had been left in the freezer, and the only way I could be sure I still had ears was to look in a mirror when we got there.

“Canadians are very informal about going out,” said Bill after we’d bought a drink and sat down.

Behind him, a man in a dark three-piece suit jerked nervously across the dance floor, encouraged by his girlfriend’s forgiving smile, while on the giant TV above their heads, enormous black men with shaved heads competed to win the national slam dunk contest.

It was difficult to see which was the most pointless exercise, and Bill and I avoided the issue, walking another ear-numbing distance to a nearby Irish bar incongruously called New Windsor House, where owner Jimmy McVeigh had recreated a west Belfast shebeen down to the lino on the floor.

Jimmy was variously from Belfast or Monaghan, depending on which of his friends you talked to, and just to be on the safe side he had hired a band for the evening from somewhere between the two. In the corner of the bar, the lead singer, a grey-faced man with matching trousers, was singing rebel ballads to a flock of upturned faces.

In one of the richest, most amnesiac cities on earth, the Irish had gathered to plead poverty and remember.

But in the middle of the noisy throng, there was one silent clue that this was not the old country.

The grey-haired man with cornflower blue eyes sitting at the bar with a pint of Harp beside him was Glenn Barr, the radical commander of the loyalist paramilitary Ulster Defence Association in the Seventies turned Londonderry entrepreneur.

In Toronto on business, he had called into the New Windsor to meet two students from his computer services firm who were in Canada on placement.

Barr may not exactly have been tapping his fingers to the strains of The Boys Behind the Wire, but the sight of him sitting in a bar filled with the noisy battle cries from the ragged edge of constitutional nationalism was one of the more bizarre visions to be had that night in a frozen city.

The rest of the book continues in the same vein.  Of course, having been born to British parents and raised in a former British colony, I enjoy their sense of humor;  but I think it carries over well enough for Americans to do likewise.

Interesting 'visuals' in his writing. LOL

I think we could all use a laugh or two at this point. This looks great, so I went ahead and got it for my Kindle.

Sadly, all Canada is good for anymore is a laugh. No other nation on Earth loves their dictator quite so well.

Anybody who could dislike The Rocketeer is already suspect on general principles. His disdain tells us more about him than about the movie.