I had to smile at this report.

Million-dollar cars are nothing new nowadays. Whether we're talking about state-of-the-art supercars or classic Ferraris and Aston Martins, paying seven-figure sums for automobiles is not as ridiculous as it used to be. But did you know that vintage agricultural equipment can also cost a fortune?

You might remember that back in April 2022 I told you about a 110-year-old Pioneer 30-60 tractor that failed to sell at auction with a high bid of almost $460,000. Well, that's nothing compared to the value of a 1913 J.I. Case 30-60, which changed hands for a whopping $1.47 million ... What's more, this 109-year-old piece of equipment is also the most expensive tractor ever sold, regardless of model year or purpose. For reference, the most expensive modern tractor, the Case IH Quadtrac, costs about $600,000. 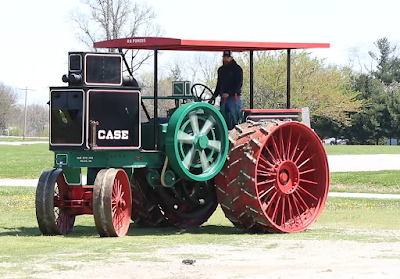 All told, it's downright amazing that there's a solid market for ancient farming equipment like this. In a world where enthusiasts are paying seven-figure sums to purchase supercars rated at more than 1,000 horsepower, it's refreshing to know that some people choose to preserve tractors that are as old as the first mass-produced automobile.

And here's a cool piece of information for you. J.I. Case Company, the brand that built this tractor, is still around as Case IH. The latter was founded in 1985 when Tenneco purchased the agricultural division from International Harvester and merge it into J.I. Case. The latter was established in 1842.

I wonder what the people who built that steam tractor, back in 1913, would have said if they'd been told that one day it'd be the most expensive tractor in the world?  I suspect they'd have had a good belly-laugh at the thought . . .

Those tractors must really hold their value well since used ones are nearly $600K. www dot fastline dot com/farm-equipment-for-sale/listings/john-deere-9570r-9570rt-9570rx-tractors/results?category=Tractors&manufacturer=John+Deere&model=9570R,9570RT,9570RX

That's not a steam tractor. It had 1,885 cubic inch, two cylinder, kerosene burning engine. Case did make steam tractors, but this isn't one of them.

when I was working in Iowa back in the 1980's, we went to the "Thresher's Convention".
A veritable Country Fair of Steam tractors, etc.

They drove them in a parade, performed work (pulling loads, lifting etc).

The Larimer County Fair always has a good collection of old tractors, but if you want to see OLD tractors, you have to go to the Greeley Olde Tyme Farm Show. Last year they had a fully functional, 175 year old well drilling machine.

For those of you in the Southeast, there's always the Southeast Old Threshers' Reunion. (https://dentonfarmpark.com/southeast-old-threshers-reunion/) I don't think there are any million dollar tractors, though.

Farmers in this country have deep pockets and long memories. Barring a tragic accident, this tractor is going to be around for a very, very long time.

A relative has an old steam tractor he said I can have for free. If I arrange the shipping for a 9 ton tractor that doesn't fit a modern shipping container from his place in England over here to the US. Maybe if it's this valuable it'd be worth it.