An audio slide show on the BBC Web site started me thinking about the impact of X-rays back in the 1890's, when they were first described by Dr. Wilhelm Röntgen. 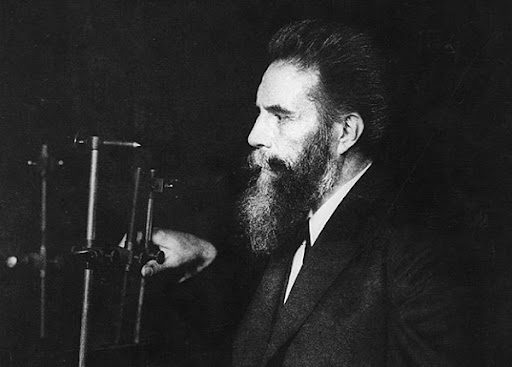 The first published X-ray picture was taken by him of his wife's hand, and caused a media sensation. According to Wikipedia:

Nearly two weeks after his discovery, he took the very first picture using x-rays of his wife's hand, Anna Bertha. When she saw her skeleton she exclaimed "I have seen my death!" 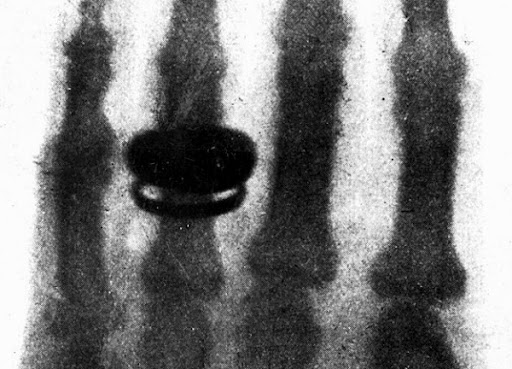 The outpouring of enthusiasm and interest over the new discovery was enormous. McClure's Magazine, Vol. 6, No. 5, published in April 1896, had a big article about the new field. Here's a short extract.

Exactly what kind of a force Professor Röntgen has discovered he does not know. As will be seen below, he declines to call it a new kind of light, or a new form of electricity. He has given it the name of the X rays. Others speak of it as the Röntgen rays. Thus far its results only, and not its essence, are known. In the terminology of science it is generally called "a new mode of motion," or, in other words, a new force. As to whether it is or not actually a force new to science, or one of the known forces masquerading under strange conditions, weighty authorities are already arguing. More than one eminent scientist has already affected to see in it a key to the great mystery of the law of gravity. All who have expressed themselves in print have admitted, with more or less frankness, that, in view of Röntgen's discovery, science must forth-with revise, possibly to a revolutionary degree, the long accepted theories concerning the phenomena of light and sound. That the X rays, in their mode of action, combine a strange resemblance to both sound and light vibrations, and are destined to materially affect, if they do not greatly alter, our views of both phenomena, is already certain; and beyond this is the opening into a new and unknown field of physical knowledge, concerning which speculation is already eager, and experimental investigation already in hand, in London, Paris, Berlin, and, perhaps, to a greater or less extent, in every well-equipped physical laboratory in Europe. 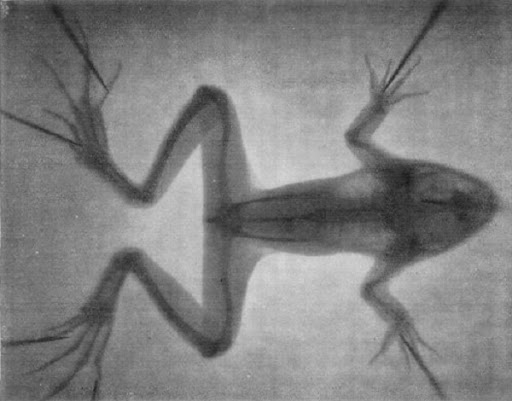 This is the present scientific aspect of the discovery. But, unlike most epoch-making results from laboratories, this discovery is one which, to a very unusual degree, is within the grasp of the popular and non-technical imagination. Among the other kinds of matter which these rays penetrate with ease is the human flesh. That a new photography has suddenly arisen which can photograph the bones, and, before long, the organs of the human body; that a light has been found which can penetrate, so as to make a photographic record, through everything from a purse or a pocket to the walls of a room or a house, is news which cannot fail to startle everybody. That the eye of the physician or surgeon, long baffled by the skin, and vainly seeking to penetrate the unfortunate darkness of the human body, is now to be supplemented by a camera, making all the parts of the human body as visible, in a way, as the exterior, appears certainly to be a greater blessing to humanity than even the Listerian antiseptic system of surgery; and its benefits must inevitably be greater than those conferred by Lister, great as the latter have been. Already, in the few weeks since Röntgen's announcement, the results of surgical operations under the new system are growing voluminous. In Berlin, not only new bone fractures are being immediately photographed, but joined fractures, as well, in order to examine the results of recent surgical work. In Vienna, imbedded bullets are being photographed, instead of being probed for, and extracted with comparative ease. In London, a wounded sailor, completely paralyzed, whose injury was a mystery, has been saved by the photographing of an object imbedded in the spine, which, upon extraction, proved to be a small knife-blade. Operations for malformations, hitherto obscure, but now clearly revealed by the new photography, are already becoming common, and are being reported from all directions. Professor Czermark of Graz has photographed the living skull, denuded of flesh and hair, and has begun the adaptation of the new photography to brain study. The relation of the new rays to thought rays is being eagerly discussed in what may be called the non-exact circles and journals; and all that numerous group of inquirers into the occult, the believers in clairvoyance, spiritualism, telepathy, and kindred orders of alleged phenomena, are confident of finding in the new force long-sought facts in proof of their claims. Professor Neusser in Vienna has photographed gall-stones in the liver of one patient (the stone showing snow-white in the negative), and a stone in the bladder of another patient. His results so far induce him to announce that all the organs of the human body can, and will, shortly, be photographed. Lannelougue of Paris has exhibited to the Academy of Science photographs of bones showing inherited tuberculosis which had not otherwise revealed itself. Berlin has already formed a society of forty for the immediate prosecution of researches into both the character of the new force and its physiological possibilities. In the next few weeks these strange announcements will be trebled or quadrupled, giving the best evidence from all quarters of the great future that awaits the Röntgen rays, and the startling impetus to the universal search for knowledge that has come at the close of the nineteenth century from the modest little laboratory in the Pleicher Ring at Würzburg.

It's odd to read of their astonishment at the uses of X-rays that we take for granted today, and shows how major a step forward was Dr. Röntgen's discovery. He was rewarded with the very first Nobel Prize in Physics, in 1901.

I recommend both the BBC audio slideshow and the McClure's Magazine article. Both illustrate how amazed our forefathers were at this new perspective on life and health. It certainly amazed me to read them!

The original machine and X-ray plate are on display in the German National History Museum in Berlin. Great museum, and it's amazing how simple the machine was!
LittleRed1

Wow! They give Nobel Prizes for accomplishments too?

In my area there was a young lady photographer, working at a camera store, who decided to train to become an x-ray technician. I commented that x-rays are just an extreme form of back-lighting.