A man of conscience


The Scotsman reports that the German sailor who saved the port of Bordeaux from destruction in World War II has died.

Heinz Stahlschmidt was that rare thing in the Third Reich, a man who followed his conscience instead of his orders when the tide of the war began to turn.

By his actions, he not only saved thousands of lives, but a vital component of the post-war economic recovery of France – Bordeaux was its most important harbour city.

But while recognised as a hero by France – he was awarded its highest civilian decoration, the Legion d'Honneur – he was regarded as a traitor in a post-war Germany. He was struck from the list of naval personnel regarded as eligible for a pension and his name erased from honour rolls of the German navy. 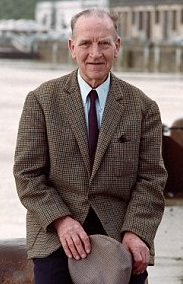 He died in his adopted homeland of France as Henri Salmide, his new name for a new life, after a long illness. He returned only once to Germany, to his birthplace at Dortmund, in 2001, preferring to spend his days among people who appreciated his humanity.

By any measure, his actions were brave and humane. This son of a plumber, who volunteered for the German navy in 1939 upon the outbreak of war, Heinz Stahlschmidt was posted to shore duties after three times being rescued when his vessels were sunk.

In Bordeaux in 1944, it fell to Sgt Stahlschmidt – a weapons and demolitions expert – to lead a detachment that defused British sea mines.

In August, the Allies were steamrolling their way through France after the successful June landings in Normandy on D-Day. Bordeaux, the largest seaport on the west coast, was occupied by the 159th Infantry Division of the German army. On 19 August, the order came from Berlin to destroy the entire port infrastructure – stretching over seven miles – before retreating. The date was fixed for 26 August.

"It fell to me," said Mr Stahlschmidt, because of his familiarity with explosives. "I couldn't do it. I knew the war was lost. What was the point of this, I asked myself. People would die and suffer, and the war would still be lost by Germany."

On 22 August, he struck. A bunker at Rue Raze in the docks was filled with detonators, plungers, timers and other hardware needed for the demolition. They were never to be used – instead, they were destroyed in a single massive explosion. "I sent the guards home and then I did it with dynamite," Mr Stahlschmidt said. "It was all I could do."

French historians estimate he saved 3,500 lives by refusing to carry out his orders.

Herr Stahlschmidt - or, I suppose, we should call him by his adopted name, M. Salmide - ranks with General Dietrich von Choltitz, the savior of Paris, who ignored Hitler's orders to raze the city and surrendered it intact. Both are remembered with gratitude in France to this day.

May the mercy both men showed to others, be shown to them in the hereafter.

Labels: History, Thank You, War
Email ThisBlogThis!Share to TwitterShare to FacebookShare to Pinterest

A brave man indeed. May he find peace.

We might mourn that such men die, but we should be glad that they lived, too. I don't know how the rest of the war was for he, but he did well indeed that day.

I've been to Bordeaux, and walked on part of the port he was charged to destroy. A toast for Monsieur Salmide, s'il vous plait.

On the other hand, he was a GERMAN soldier and had he performed his duty the use of that port would have hindered logistics for the Allies and dampend their efforts against the German Army. While I am not a Nazi, and perhaps glad he did this to our benefit, it was still dereliction of his duty to his Nation. I don't blame the Germans for their attitude about it.