I was highly amused - not to mention impressed! - to read of a British Army cook in Afghanistan who prepared Spam for his troops for an unbelievable 42 days, after other supplies were interrupted by enemy action.

With almost no gastronomic ammunition to hand, the 26-year-old opened tin after tin of the chopped pork and ham and produced a series of dishes to rival the famous Monty Python Spam sketch. 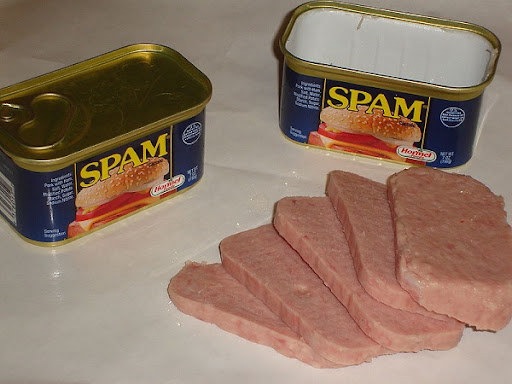 'I was surprised what we could do: Sweet and sour Spam, Spam fritters, Spam carbonara, Spam stroganoff and Spam stir fry,' said the father of one from Tidworth, Wiltshire.

'We were on compo [field rations] for six weeks and we only had one menu - Spam.'

But he added that the troops were relieved when fresh supplies finally arrived. 'The first day off Spam, I prepared battered sausages, chips and curry sauce,' he said. 'The Sergeant Major said it was the best meal he had ever had.'

He was forced into emergency action at the Forward Operating Base in Sangin when Taliban fighters shot down a civilian supply helicopter the day before he arrived, leaving him without the usual beef burgers, chicken, sausages and fish and chips.

A spokesman for Spam said: 'We were most impressed with the recipes Corporal Liam Francis came up with. The soldiers do an amazing job and we were pleased that we helped in some small way.'

Corporal Francis is now back in the UK's main base in Helmand province, Camp Bastion. In a single week the kitchens there get through 7,500 burgers, 2.5 tons of chicken breasts, 20,000 baguettes and 4.5 tons of potatoes and chips.

Personally, I'd give him a bravery award for daring to feed his troops Spam every day for so long - and I'd give the troops a unit award for putting up with it!

Meanwhile, for those who aren't Monty Python aficionados, here's their (in)famous Spam sketch.

Had he instead threatened to lob Spam at the Taliban, they would have resupplied the troops themselves.

Now that's a great idea.
Shell 'em with SPAM!
Maybe arrange it so the cans explode over the Taliban, showering them with all that porky goodness.