The Daily Mail has two really interesting articles with great shots of animals in their natural environment.

The first is about a diver who's apparently made friends with a young sperm whale.

Peering solemnly nose-to-nose at each other, this is the Whale Whisperer and his friend - Scar the 10-year-old giant of the sea. 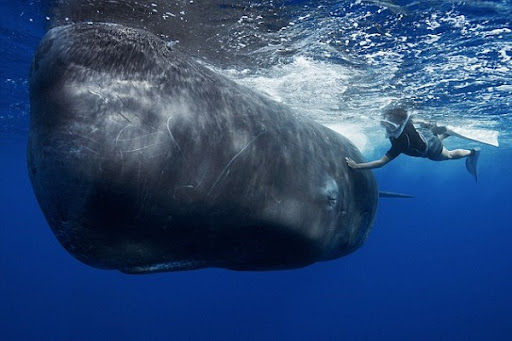 These spectacular images show Andrew Armour bonding with the colossal sperm whale in the warm Caribbean waters off the island of Dominica.

Taken on the weekend, the photographs offer stunning insight into the lives of other pod members travelling with Scar.

In one picture a large group of 'socialising' whales come together - giving the impression they are meeting up for a chat.

And in another they arrive in a perfectly formed procession - almost like they are part of an underwater military march.

The jaw-dropping series of images show how a decade spent befriending the gentle giant allows Andrew, 45, to stroke and gracefully swim alongside the 32-foot mammal.

Whale watch operator Andrew, from Dominica, said: 'Our bond began in 2000 when my wife Rhona found him injured out at sea when he was just a calf. We think he might have been attacked by pilot whales but we are not sure.

'His head and dorsal fin were injured and he came to our boat, perhaps seeking some comfort. The most we could do was pet him and his injuries left him with some scarring.

'From then on he and another young female would approach us whenever they saw our boat. We could even call him over.

'Now he recognises me when I am swimming. I feel like he even knows my voice. I can get very close with him because we trust each other. I even clean lice off him and he lets me do it.

'Other whales in the area don't tend to stay in the same place when humans are around but Scar seeks interaction and seems to enjoy being petted.'

There's more at the link, with more photographs.

The second is about a leopard in Botswana who decided to eat a porcupine for supper. Bad, bad idea . . .

The big cat was left with sore paws and a bruised ego after losing out in a battle of wits with its spiny opponent.

Using all his hunting techniques, the two-year-old male tried pouncing on the porcupine from above, prodding him and trying to roll him over, but to no avail. 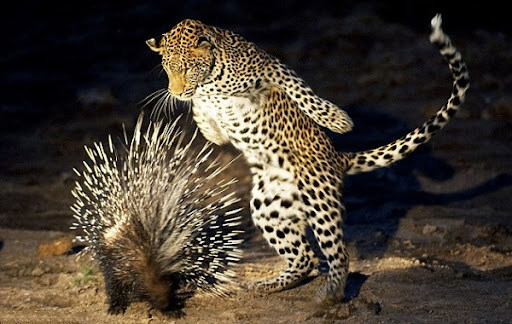 Undeterred, the hungry feline even tried extending a gentle paw as the porcupine shook its foot-long spines ferociously.

After 25 minutes and several painful spines in his paws, the big cat was forced to accept defeat and retreat with his tail between his legs.

The incredible moment was captured on camera by professional wildlife photographer Shem Compion in the Mashatu Game reserve, in Botswana.

Both articles are highly recommended for nature lovers. Great photography!

I've seen professionally-maintained aquariums with murkier water than that!

Great pics, thanks for sharing those links. Good stuff!