A gruelling race makes a comeback


A classic long-distance powerboat race is to be revived.  The Telegraph reports:

It was one of the world's most glamorous – and gruelling – races. From the south coast of England, a fleet of powerboats made their way 3,000 miles around to the Mediterranean and a finish line on the French Riviera.

Run just once before, in 1972 – when Princess Margaret dropped the starting flag and Princess Grace of Monaco handed out the prizes – the event is being revived after a 40-year hiatus.

The Cowes to Monte Carlo Powerboat Grand Prix is the longest and toughest race of its kind. Like a marine equivalent of the Gumball Rally, a 3,000-mile international road trip, entrants progress in daily stages.

But as well as racing one another they are also taking on the elements, crossing some of the world's most challenging waters.

Over 15 days, the teams will visit 11 ports in five countries as they traverse the Channel and the Bay of Biscay, navigate around the Iberian peninsular through the Strait of Gibraltar, then speed along the Cote d'Azur. Along the way, competitors get just four rest days.

Each leg is between 200 and 350 miles and the boats will be at sea for up to seven hours a day. Timings from each day's racing are added up, with the winner crowned in Monte Carlo.

The race will start off from the Royal Yacht Squadron at Cowes in the Isle of Wight on June 8 next year. Already, 47 teams, from 12 countries, have signed up.

The boats must be between 25ft and 50ft in length, with a crew of at least two. Such vessels can reach top speeds of up to 100mph but will be racing more slowly to conserve fuel, ensuring they have enough to get to their destination. When conditions are favourable, the lead boats are expected to average around 50mph.

Organisers expect that they will carry an average of 220 gallons of petrol or diesel per leg, but at high speeds the vessels consume about a gallon per mile.

Some of the multi-million pound craft are being built for the event, but older boats are also being adapted to cope with the extreme conditions, including HTS, the winning boat from 1972 [shown below], which has spent about 20 years in a museum. 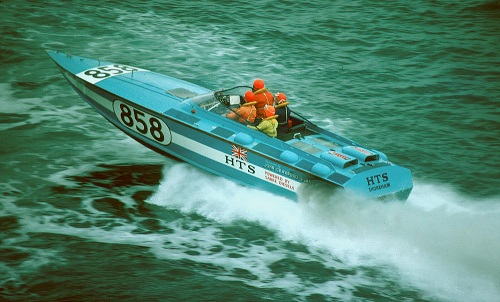 As impressive as the endurance of the boats and crews taking part, is likely to be the onshore operation supporting the race.

Each entrant must have a backup team following on land, with a trailer capable of transporting their boat by road in case bad weather – 30mph winds creating 13ft waves or worse – leads to the cancellation of a leg.

There are expected to be about 300 to 400 race followers shadowing the boats, along 3,300 miles of roads. A classic car rally is even planned to follow the route.

This should be a mammoth undertaking, involving tens of thousands of participants, support staff, spectators, officials and volunteers.  What impresses me is the knowledge of how tough it's going to be on those in the boats.  If you've never spent a long period in a high-speed powerboat, its impact with the water is like hitting concrete - and it'll be crossing some of the roughest water in the world, in the Bay of Biscay.  The crews will emerge from a long day's racing with their backs (particularly their kidneys) feeling like they've been worked over by a jackhammer!  The winner is likely to be the best-enduring crew rather than the best-performing boat, given that all participating vessels will be high-performance to begin with.

I'll look forward to learning more about this race revival.  It should be a very interesting event.

Yep, they're gonna need new kidneys too... but it WILL be exciting!!!

Bah! Go look up the statistics for "The Race". Boats were maintaining 40+ knots for hours on end under sail!

Put a big enough engine on it and anything will fly. Doing it with just wind power is a lot more impressive.

I saw a segment of Top Gear (UK) last month involving a high-speed boat trip across quite a few miles of open water -- a few hours at 50-70 knots on increasingly rough water, to the tune of a broken mounted camera and some very abused passengers.