More interesting news on the economy


The past few days have seen a number of interesting posts about the economy and our present crisis - some foreboding, others optimistic.  I'll put up a few links and summaries for those interested.

First, John Mauldin has two very interesting perspectives on the current situation in his regular 'Thoughts From The Frontline' newsletters.  In the issue for September 10th (link is to an Adobe Acrobat document in .PDF format), he provides a long and thoughtful analysis by Harry Dent, predicting deflation rather than inflation despite the Fed's efforts to stimulate the economy.  Here's a brief excerpt.

Just think about it.  What has happened after every major debt bubble in history?  What happened after the 1873-74 bubble?  Or after the 1929-32 bubble?  Did prices inflate or deflate?  We got deflation in prices ... every time.  This time around, with the latest bubble peaking in 2007/08, the outcome will be exactly the same.  There is deflation ahead.  Expect it. Prepare for it.


Think of it another way:  what is the biggest single cost of living today?  Is it gold?  Oil?  Food?  It's none of these.  It is housing.  And what is housing doing?  Dropping like a rock.  It can't muster a bounce, despite the lowest mortgage rates in history and the strongest stimulus programs anywhere ... ever.

The Fed is fighting deflation purposely.  It will fail.


There's much more at the link, including more evidence for Mr. Dent's belief that deflation is inevitable.  I'm not sure I agree with all his points, but he builds a very strong case.  We'll see . . .

In his newsletter for September 15th (another Adobe Acrobat document in .PDF format), Mr. Mauldin examines the forthcoming US elections in the light of the economy.  Here's a brief excerpt.

The preview of economic consequences depends on your view of what the most important issues are that need to be decided (in terms of economics). Let me list my top ten.

I am only being mildly flippant. How we deal with the deficit affects everything else. And not dealing with the deficit leads to a disaster of biblical proportions, the equivalent of all eight of the first eight plagues. Ask Greece or Spain.

It is easy to dismiss the deficit as something that has always been there. Haven’t Chicken Littles been telling us the deficit sky is falling for decades? Japan seems to be capable of running large deficits, and we are nowhere near their level of debt. Isn’t “Japanese Disease” the worst outcome we are looking at – a slow-growth world that, while frustrating, is not cataclysmic? And some have been calling for even larger deficits in the name of spurring economic growth and jobs, harking back to periods when the government did indeed run deficits and the economy seemed to respond and once again grew.

It is easy to dismiss deficits as something we can deal with later. Like Hemingway’s character, who when asked “How did you go bankrupt?” replied, “Two Ways. Gradually, then suddenly.”

For most times, deficits are indeed not a problem. Many families and companies and governments run losses and borrow money to keep from having to curb their lifestyles and programs. It is not actually the immediate deficit that is the issue, but the total debt.  If debt is low and cash flow is good, then deficits can be a good thing. Debt that is invested in income-producing assets or infrastructure that makes a family or business or nation work more efficiently can be beneficial.

It is when the total debt becomes too large that servicing that debt becomes an issue. And that is when the lenders first ask for more collateral or higher interest and then, if the debt is not brought under control, they stop lending. For a nation, its bond market simply collapses.


Again, more at the link.  It's a very cogent and well-argued analysis.  Recommended reading.

Next, PricewaterhouseCoopers (PWC) has produced two very interesting reports:  'Shale gas: A renaissance in US manufacturing?' and 'A homecoming for US manufacturing? Why a resurgence in US manufacturing may be the next big bet'.  (Both of the links lead to introductions to the articles, which provide links to the full-text versions in the form of Adobe Acrobat documents in .PDF format.)  Briefly, both argue that manufacturers are now finding economic advantage in 'bringing manufacturing home' to the USA, rather than producing their goods in Chinese factories.  If these reports are accurate, the US economy may benefit significantly.

Of course, there's the problem of over-reaching government regulation.  PWC provides this graphic to illustrate positive and negative aspects of bringing manufacturing back to the USA: 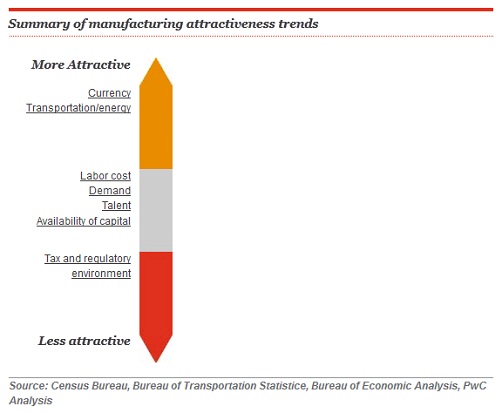 We need to drastically simplify and streamline our regulatory environment and business tax structure if we're to take advantage of the trends PWC identifies.  Will our government do so?  I have my doubts about the present Administration . . .

Next, Michael Pettis forecasts that by 2015, hard commodity prices (for staples such as copper, iron, coal, etc.) will collapse as China's economic growth slows.  He offers many points to ponder, which are well worth reading.  Here's a money quote.


If China's economy is indeed slowing, as all available evidence seems to suggest, that cuts global demand to an enormous extent - and commodity producers, who've all ramped up production during the past decade to satisfy China's needs, are going to suffer accordingly.  Food for thought.

Some say the Fed panicked. I say it is business as usual. It is required to keep rates low to avoid the government going bust, which would happen if it had to pay too much interest on its debt. The Fed has essentially promised to destroy the dollar to keep supporting the banks and to keep the government alive, with debts that the political parties have no way of coming to an agreement on how to fix. The Fed has clearly told us what to expect.

The trajectory is unsustainable. I believe that during the promised time frame to 2015, there will be a new downgrade of US debt, that the Fed will print at least as much as indicated above, and that confidence in the dollar will erode even more.


More at the link.  Bold print is my emphasis.

The inimitable Karl Denninger puts it even more bluntly.

Much ink has been spilled, including by myself, in the immediate aftermath of Bernanke's idiocy with "QE3".

But we should all remind ourselves of two ugly and inescapable facts:


We can prattle on about this, that and the other thing, but we cannot escape this reality.  The only thing that matters when it comes to employment is the percentage of working-age people that have jobs.  That's it.  It's all there is from a standpoint of economic progress and it's also all there is from a standpoint of fiscal sustainability as only the employed pay taxes.

QE has been an abject and objective failure.

The real reason for QE is that the banks are still ridiculously levered compared to both historical norms and sustainable levels.

This has expressed itself in housing -- and still does, despite what you hear on CNBS.

Preventing this correction in the banking system, which is inherently tied to home prices, is what QE is about.  The Fed and Federal Government are walking hand-in-hand in this regard, as the Federal Government is handing out money like seawater at oceanside to everyone under the sun in ever-increasing numbers -- food stamps, Medicaid, student loans, you name it -- all in a puerile and ultimately futile attempt to protect a financial system that got too full of itself and then turned to fraud and scam in an attempt to keep the "money train" rolling.

We have a toxic witches' brew created by an evil, deranged and delusional wizard and his minions, and if that wizard is not caged and his minions put out to pasture it will not be long before the damage becomes so great that the system folds back on itself and collapses.


More at the link.  Bold, italic and underlined text is Mr. Denninger's emphasis.

(I provided my own views on QE3 last week.  Needless to say, I concur with Casey Research and Mr. Denninger.)

Finally, several blogs have recently republished (sometimes embellished or inauthentic) versions of a famous newspaper column by Charley Reese, which appeared in the Orlando Sentinel on March 7th, 1995.  It's very good, and (in its original, unembellished version) very relevant to our present crisis.  Here's an excerpt.

To put it into perspective just remember that 100 percent of the power of the federal government comes from the U.S. Constitution. If it's not in the Constitution, it's not authorized.

That's 435 members of the U.S. House, 100 senators, one president and nine Supreme Court justices. Anything involving government that is wrong is 100 percent their fault.

Congress is the originator of all government problems and is also the only remedy available. That's why, of course, politicians go to such extraordinary lengths and employ world-class sophistry to make you think they are not responsible. Anytime a congressman pretends to be outraged by something a federal bureaucrat does, he is in fact engaging in one big massive con job. No federal employee can act at all except to enforce laws passed by Congress and to employ procedures authorized by Congress either explicitly or implicitly.

Partisans on both sides like to blame presidents for deficits, but all deficits are congressional deficits. The president may, by custom, recommend a budget, but it carries no legal weight. Only Congress is authorized by the Constitution to authorize and appropriate and to levy taxes.


I highly recommend clicking over to the Orlando Sentinel to read the whole thing.  It's worth it.  After you've read it, pass the link to your friends, and advise them to remember it in November when they exercise their franchise!

The business I run is slow this week, and last. Looking back into historical data, I find it's always slow this time of year.

I asked everyone I can think to ask, who might have an inkling why. No one has a clue.

The best and brightest cannot tell me why this lube shop is always slow these few weeks a year. Knowing that, I doubt they can reliably predict an entire economies worth of insanity.

But a car that's already three quarters over the cliff....not much problem predicted what happens next.

I don't understand how deflation is more of an issue than inflation. I just don't. How can the value of the dollar increase, when we are creating new ones out of thin air?

What anon 845 just said, plus this simple observation: if housing prices are deflating while food and energy are inflating (and they are, and they will continue to), all that means is the answer to his rhetorical question (what is the biggest single cost of living today?) changes.

It doesn't matter to the trucking company who brings food to your store if their rent goes down, if they can't make enough money to cover the costs of their fuel and other operational costs. If they can't food disappears from the shelves.