Am I a prophet, or what?

Furthermore, note the history of most authoritarian governments (including China's) when faced with internal crises.  Overwhelmingly, their response has been to try to focus the attention of their people on external factors - blaming other countries for the problems, or whipping up nationalistic feelings against perceived outside interference in particular issues.  The current dispute over the South China Sea is one such issue . . . and that should make the other nations involved in it very nervous indeed.  Since the USA is an ally of several of them, we're likely to be dragged into the fuss, too, whether we like it or not.


This morning, less than twelve hours later, what do I read in the Telegraph?

China deployed two navy vessels and launched a furious verbal assault on Japan after Tokyo announced it had ‘bought’ a group of islands disputed by the two countries in the East China Sea.

On Tuesday morning Osamu Fujimura, Japan’s chief cabinet secretary, confirmed his country had agreed to purchase the islands, called Senkaku in Japan and Diaoyu in China, from a Japanese family it claims owns them. 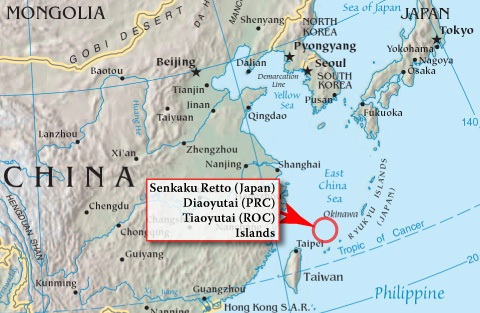 Media reports in Japan said the government would pay a total of 2.05 billion yen (£16.4 million) for the islands and that the transfer of their ownership would be completed by the end of this month.

In a statement issued on Monday, after Japan confirmed plans to buy the islands, China’s foreign ministry warned Tokyo would have to “bear all serious consequences”.

“Long gone are the days when the Chinese nation was subject to bullying and humiliation from others. The Chinese government will not sit idly by watching its territorial sovereignty being infringed upon,” it said.

The statement said Japan’s “so-called ‘purchase’” was “a gross violation of China’s sovereignty over its own territory and is highly offensive to the 1.3 billion Chinese people.”

“It seriously tramples on historical facts and international jurisprudence. The Chinese government and people express firm opposition to and strong protest against the Japanese move,” the statement added describing the move as “totally illegal and invalid”.

The Global Times said that Beijing could not rule out a possible “confrontation between China and the US-Japan alliance”. “China should be prepared for the worst,” it said.

“What I most want now is to hear the bugle call of the People’s Liberation Army,” wrote ‘Green Tea Teacher’ on the Tencent microblogging site. “It is the most beautiful sound.”

*Sigh* . . . I like being proved correct as much as the next man, but I'd far rather it wasn't with threats of war!