Readers may be familiar with the handiwork of China's Broad Group.  The company has developed innovative factory-based construction techniques that allow it to build structures much faster (and hence more cheaply) than traditional methods.  It became famous for building the core structure of a 30-story hotel (shown below) in just 15 days. 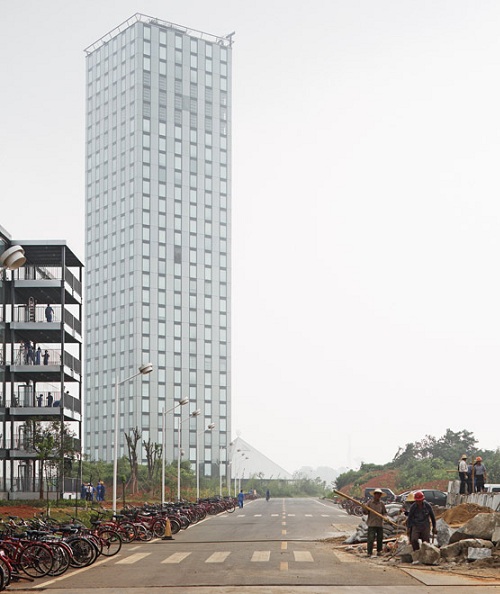 Here's a time-lapse video clip showing how the company's methods allowed it to erect the core of a 15-story hotel in a mind-boggling two days!  Finishing the structure took only four more days.  I find it particularly interesting that most of the supporting infrastructure of traditional building methods was not required (for example, there was no central crane system used).

Wired magazine has an in-depth article about the company and some of its building projects.  It's interesting reading.  Apparently the company now plans to build a 220-story skyscraper in just seven months!  Given that construction of the planned 104-story One World Trade Center in New York is expected to take seven years, perhaps we should be paying more attention to Broad Group's technology . . .

Yeah, that is an interesting concept... But I can't help but wonder how earthquake proof it is!

About 20 years ago I ran across a building technique developed by someone in France (can't remember the name), and employed for constructing a few hotels and retirement homes in south Florida. The concrete shell of a 6 story building went up at one floor per day. In the morning room-sized, L-shaped forms get placed and locked together, the rebar/mesh panels craned in between and on top of the forms, in the afternoon concrete is poured. Next day, it happens again one floor up. After 2 days forms are pulled with internal bracing (4x4 lumber) replacing them and the forms are re-used a couple of floors up. Conduit for electric, etc. are in the rebar/mesh panels. 6 days to put up 6 stories, another 30-40 for finish work, done.

I guess it demonstrates what can be accomplished when non-union labor is involved.

I think the 7-year NYC problem is related to two things: union labor and the building wasn't designed to be erected quickly, or use modern construction techniques.

@Old NFO: According to the Group's Wikipedia article:

"BSB has also been tested to be able to resist a 9.0 magnitude earthquake and was recommended in an United Nations Environment Program report on the rebuilding of Sichuan after its catastrophic earthquake in 2008."

I notice that they worked day and night. Not done here, mainly due to labor union refusal. They also appear to have used a lot more workers than we do here, and I'm sure that none of them are unionized. When we didn't have labor unions in the way, we did great things here once, like the Pentagon in 15 months, or the 1,700 mile Al-Can highway in 7 months. But American labor unions slow projects down and drive costs up, and when they don't get everything that they want, they stop the work altogether.
Get the unions out of our way and American workers can continue beating China and everyone else at everything.

It does take dedication and commitment, but they were churned out quickly enough to more than make up for the numbers that were sunk.

I'd love to see this done on a contract with bonuses for early completion.

Certainly union rules play a role but there's also the economics on working in China. Similar per-day spending in a country where labor is much cheaper means a greatly increased workforce. Sure, union rules contribute a fair bit to the labor costs but there's a lot of other factors at play. For example: many Chinese construction firms employ migrant workers from poorer parts of China and pay them the equivalent of about $5 per day. They live in makeshift shelters on-site and move with the projects. Union rules or not there's no way you could get away with that in the US. Even without minimum wage laws can you imagine living on $5 of food/medicine/clothing a day? There's a reason that the factories are there and it goes far beyond unions.