Getting a handle on things . . . literally!


As many readers know, I'm now engaged in full-time writing, after a disabling injury prevented me from continuing to work in the ministry.  I had a book published back in the 1980's (now long out of print), but the civil unrest in South Africa worsened to such an extent that it blocked my hopes of being able to continue writing for publication.  Thereafter things just didn't seem to work out that way . . . but when you've got nothing else to do except lie in bed and hurt, writing takes on a new impetus!  I hope to have my first fiction published early next year.

As part of 'learning the trade' of fiction writing, even though my fiction isn't primarily faith-oriented, I've joined a group called the Lost Genre Guild, which seeks to bring together writers of faith who are interested in the genres of science fiction and fantasy.  There are some interesting people there, including a gentleman by the name of Robert Treskillard, whose fantasy novel 'Merlin's Blade' is to be published by Zondervan in February 2013.

I found it fascinating when Mr. Treskillard advised the LGG mailing list that he'd hand-crafted the hilt for Merlin's sword, which will be photographed by Zondervan to publicize his book.

How many authors get so wrapped up in a 'sword-and-sorcery'-type novel that they actually make their protagonist's weapon?  Talk about involvement! 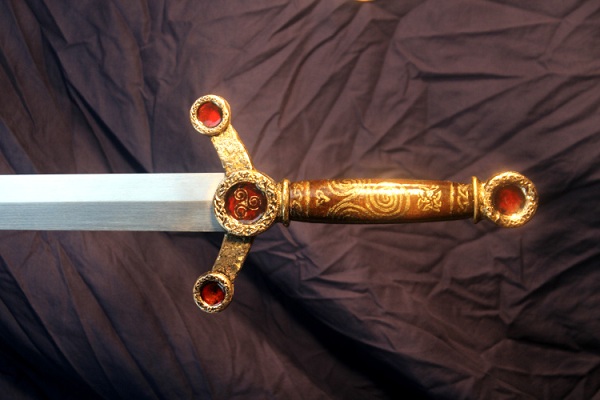 He describes the process of manufacturing the hilt on his blog.  It's a very informative article for those interested in metalworking, with lots of pictures (including those used above).  Recommended reading.

I'll be looking forward to Mr. Treskillard's book.  With that sort of attention to detail, it should be well worth reading.

You'd be surprised at the lengths and levels of detail some people go to (and through) for their passion.

Sometimes this stuff just swims around in your head and you have to get it out.

Thanks for the article, Peter! :-)

Despite the hard work and my many failures trying to bronze cast, it was well worth the trouble.

It's a pity that the best Science Fiction and Fantasy in recent decades has been written by atheists and pagans. I've been disappointed far too often with Christian fiction, of any genre. There's some out there, but pickings are slim. I've wondered about it occasionally, and it can't be totally because people of faith eschew writing graphic sex and violence. Orson Scott Card has done quite well without it.