A warrior of the old school


While searching through the obituaries at the Telegraph for a different reference, I came across the obituary of Amedeo Guillet (1909-2010), who seems to have been a veritable Lawrence of Arabia in Italian form.

Amedeo Guillet was born in Piacenza on February 7 1909 to a Savoyard-Piedmontese family of the minor aristocracy which for generations had served the dukes of Savoy, who later became the kings of Italy.

He spent most of his childhood in the south – he remembered the Austrian biplane bombing of Bari during the First World War – then followed family tradition and joined the army.

After the military academy at Modena, he chose to join the cavalry and began training at Pinerolo, where Italian horsemanship under Federico Caprilli had earlier in the century won world renown – the current "forward seat" and modern jumping saddles evolved there.

Guillet excelled as a horseman and was selected for the Italian eventing team to go to the Berlin Olympics in 1936. But Mussolini's invasion of Ethiopia in 1935 interrupted his career as a competition rider. Instead, using family connections, he had himself transferred to the Spahys di Libya cavalry with which he fought repeated actions.

He also witnessed aerial gas attacks on Emperor Haile Selassie's lightly armed warriors, which appalled world opinion. In Guillet's view, gas was largely ineffectual against an unentrenched enemy which could flee, and he himself was fighting with horse, sword and pistol.

At Selaclacla, after using the hilt of his sword to dislodge an Ethiopian warrior who had grabbed him around the waist, Guillet received a painful wound to the left hand when a bullet hit the pommel of his saddle.

Decorated for his actions, he was flattered to be chosen a year later by General Luigi Frusci as an aide de camp in the "Black Flames" division, which was sent to support Franco in the Spanish Civil War. It was the first post Guillet had been offered without family influence.

There he suffered shrapnel wounds and helped capture three Russian armoured cars and crews. But the atrocities he witnessed on both sides were a sobering experience for Guillet, who deplored what he saw of Italy's German allies during their intervention.

No longer a uncritical, puppyish subaltern, Guillet returned to Italy and Libya. He echoed the views of many in disapproving of the pro-Nazi alliance of the regime and absurdities such as the anti-Semitic race laws.

With growing disgust for Europe, Guillet asked for a posting to Italian East Africa, where another family acquaintance, the royal prince Amedeo, Duke of Aosta, had been appointed viceroy to replace the brutal and inept Marshal Graziani. By this time Guillet had also become engaged to his beautiful Neapolitan cousin Beatrice Gandolfo, and their intention was to make a life for themselves in Italy's new empire.

Mussolini's decision to enter the war on the side of Germany in May 1940 ended these dreams, cutting off Italian East Africa, which was surrounded by the territories of its enemies, and separating Amedeo from his fiancée, who remained in Italy.

Aosta gave Guillet command of the locally recruited Amhara Cavalry Bande, as well as 500 Yemeni infantry – approximately 2,500 men. With almost no armour, the Italians used Guillet's horsemen to delay the advance of the British 4th and 5th Indian Divisions when they crossed the Eritrean frontier in January 1941. 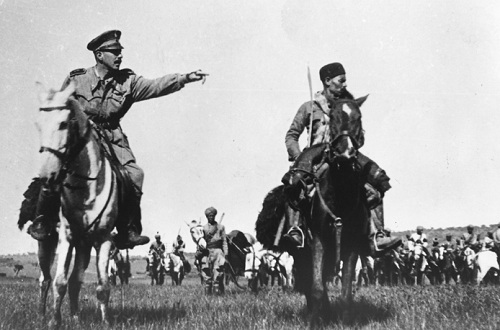 Amedeo Guillet and his Amhara Cavalry Bande in Eritrea in 1941


Guillet's actions at Keru, and subsequent hand-to-hand fighting at Agordat, helped allow the Italian army to regroup at the mountain fortress of Keren, where it mounted its best actions in the entire war. After nearly two months, however, the British broke through, and the road to Eritrea's capital, Asmara, lay clear.

Most of the Italian army surrendered, but Guillet refused to do so. Aosta had ordered his officers to fight on to keep as many British soldiers as possible in East Africa, while the new German commander in the Western Desert, Rommel, sought to reverse the earlier Italian disasters.

For nine months Guillet launched a series of guerrilla actions against British troops, plundering convoys and shooting up guard posts. At his side was his mistress, Khadija, an Ethiopian Muslim, for he never believed he would ever see Italy or Beatrice again. Two curious British intelligence officers pursued him: Major Max Harrari, later an urbane art dealer who would become Guillet's close friend, and the driven intellectual Captain Sigismund Reich, of the Jewish Brigade, who was eager to get on with the task of killing Germans.

Despite their attentions, Guillet managed to escape across the Red Sea to neutral Yemen, where he became an intimate friend of the ruler, Imam Ahmed. He sneaked back to Eritrea in 1943 in disguise, and returned to Italy on the Red Cross ship Giulio Cesare, where he was reunited with Beatrice.

The couple married in April 1944 and he spent the rest of the war as an intelligence officer, befriending many of his former British enemies from East Africa.

In the postwar world, Guillet joined the diplomatic service and, as his Arabic was fluent, served in the Middle East. In 1950s Yemen, he and Beatrice were the only non-Muslims permitted to live within the walls of Sana'a and Taiz.

Guillet led the last cavalry charge faced by British forces in the field, during the Ethiopian campaign in 1941.  It's been described as follows.

At daybreak on 21 January 1941, only the sentries and the cooks were awake in the British camp outside Keru ... [where] the 4th and 5th Infantry Divisions were pressing south into Italian East Africa – today’s Ethiopia and Eritrea. Suddenly the sentries, hardly able to believe their eyes, screamed “Tank alert!” as a horde of horsemen in native dress broke into the camp brandishing swords, hand grenades and molotov cocktails, their leader shouting the Italian battle cry “Savoia!”

The intruders slashed their way through the 4/11th Sikhs, and then galloped straight towards British brigade headquarters and the tanks and 25-pound artillery of the Surrey and Sussex Yeomanry. As the British trained their howitzers down to zero elevation and decimated the horsemen, they also wreaked havoc on their own colleagues with “friendly fire” while the surviving horsemen disappeared into the desert. The British army had just suffered its last ever cavalry attack, almost the last in the history of modern warfare.

There's an entire Web site dedicated to Amedeo Guillet's life and exploits.  It has many photographs, and is well worth reading.  He seems to have been one of those restless souls who was always searching for adventure.  The normal 9-to-5 trappings of Western civilization never satisfied him.

Someone should write a book and then a movie script