The Royal Norwegian Air Force celebrated its centenary with an air show on September 1-2, 2012, in Oslo.  Back in July we showed an F-16 of the RNoAF that had been given a special paint job to celebrate the anniversary.  It was part of a large number of aircraft taking part in fly-pasts to commemorate the occasion.  Here's a video of the fly-pasts, featuring aircraft ranging from historic to contemporary.

Flight Global has an account of proceedings, including the photo below (cropped for display here) of a giant screen portraying Per Waaler. 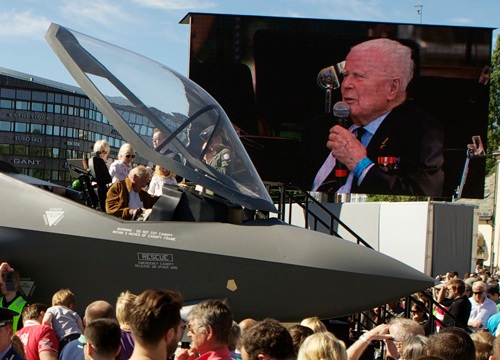 He was "one of the Norwegian pilots who scrambled to face off against the German invasion on 9 April 1940" - in a Gloster Gladiator biplane fighter.  Talk about living history!

For argument's sake, which is the 5 oldest Air Forces? As independent arms in the military from countries that still exist I mean.

Kudos to them! I've had the pleasure of working with them for number of years! VERY professional!!!

@Luke: The RAF is the oldest independent air service, AFAIK. The South African Air Force is, I think, the second-oldest, dating back to February 1st, 1920.

Many air services pre-date the First World War (including the USA), but all were established as part of existing military services such as an Army or Navy. Independent air services are a different kettle of fish.

That first one looks like a Bleriot. Is there any identifying information on the aircraft shown flying? (of course I couldn't miss the Spitfire or the DC-3)