Older readers may remember flying aboard the last generation of piston-engine airliners such as the Douglas DC-6 and DC-7 or the various models of the Lockheed Super Constellation.  These aircraft typically used turbocharged and/or supercharged piston engines, producing several thousand horsepower.  For example, later models of the Super Constellation were equipped with Wright R-3350 18-cylinder radial engines fitted with turbo-compound (i.e. turbine-boosted) technology, as illustrated below. 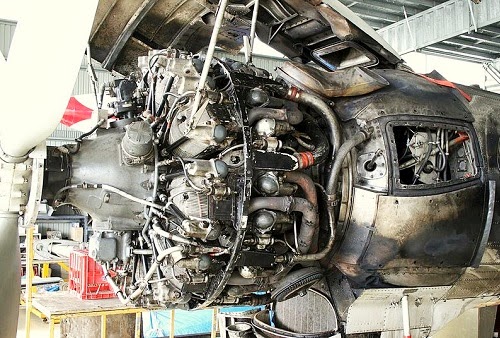 Due to their large (and large number of) cylinders, and the pressurized injection of fuel and air at high power settings, their exhausts usually produced a lot of flame and sparks on take-off, as illustrated in this evening ascent of a Qantas Super Constellation at the Avalon air show in 2011.  I recommend watching the video in full-screen mode.

It's a spectacular view from the ground - and I'm here to tell you, it's even more spectacular looking out at the shooting flames and sparks from inside the cabin!  Unless you know what's going on and realize that they're quite normal, it can give you quite a fright!

I've flown in DC-3's, -4's, -6's and -7's (the latter just as 'sparky' as the Super Constellation, if not more so) in many parts of Africa.  Modern jetliners may be faster, quieter and much more efficient, but there's still a certain nostalgic magic in the old birds . . .

Boy do I remember flying those "hotdog" planes. My father was an engineer who began his career with Curtis Wright in East Paterson (Now Elmwood Park), NJ in the late 1930's. The big engine plant was actually about 10 miles away in Woodridge ( http://www.unquiettomb.com/index/abandoned/curtiss-wright-airplane-engine-factory/)

Later on (1950) he hired on with Pan American as a radial engineer. He and I flew 4's, 6's Connies but my favorite was the Boeing 377 Stratocruiser.

In many cases we flew from Idewild (now JFK) to Miami where the radial engines were overhauled at a huge facility. On the night flights the flames and embers of carbon flew out the exhausts to yards and lit up the sky. Almost as much fun as fireworks on July 4th. Shutting down an engine due to uncontrolled over-revving or over-heating and feathering a prop was a common event.

Those were great days & nights.

I had a little time in EC-121s (Super Connies) in the Navy, and the short stacks did cause one to light up the night so to speak. You had to keep an eye on them when the power was pulled back to make sure it didn't CONTINUE to burn... :-) And that one is a LOT prettier than the ones I flew on!

Interesting enough, radials are still a part of the curriculum for A&P mechanics. Turbocompounds were only included as a test question, but my class had to demonstrate timing mags to R-985s etc.
Too bad there's not more of these flying today.

Talk about bringing back odd memories; in 1973 on a hot August night, I was coming home from visiting a girlfriend in Miami, almost home to Tamarac, which is in NW Ft. Lauderdale. As I approached a big intersection, there was a commotion going on: flashing lights, police, fire and more.

On the ground, in an open field, a Super Connie which had landed wheels up and skid across a major road earlier in the evening. Thanks to the miracle of the Interwebs, I found a story about it: http://aviation-safety.net/photos/displayphoto.php?id=19730805-0&vnr=1&kind=C

The plane sat in the field for quite a while, until they figured out how to get it out of there. I seem to recall no one wanted to resurrect it and it was just salvaged out as scrap.

There are few sounds on the planet as nice as the range of noises you get from a radial. From the chug-a-lug as they sit on the ramp warming up to the pissed off jack hammer sound of a Corsair showing off a max power and minimum altitude....

As a child in the 60's, my parents used to take me to the Cincinnati airport. They had an observation deck on top of the concourse where you could watch the planes come in, unload, load, take off, etc. Even in the mid 60's there were a lot of the DC's still flying. I'll never forget how loud they were when they turned over their props...

Of course, now...no such thing as an observation deck at an airport...

Unless it is a big steam engine at speed -- think Union Pacific's 8444 or 3985 -- there is nothing I can think of more wonderful to watch than a Super Connie -- even standing still. Or a -7, or Stratocruiser.

but oh those turbocompound Wrights were a nightmare...

Man! My first ever flight across Africa was on a Super Connie. Never forgot it, it's still the most beautiful plane ever built!

April, 1957, Charles Kingsford Smith Airport, (Sydney International Airport). I'm 7 years old, following my Uncle up the port rear airstairs of a vision of pure beauty, a QANTAS Constellation, in the hangar being serviced, I 'choke'/thrill even now as I recall the one-on-one tour from tail to cockpit. Legacy?.
My existence is all things aeronautical, though never a pilot, but KEENLY, a cadger of rides, ('jollies' in Aussie RAAF slang), both civillian and in my RAAF career, that walk up those stairs that day, has had unimaginable, fabulous, repercussions. My Wife, and our Sons have travelled the world, horizons unlimited, and our journey continues,....because an Uncle took his nephew to see an aeroplane.
There's a point, and a promise, to what comes next.
My Brother and his awesome Wife, Tammy, were blessed with a baby, Owen-Stanley Bray Garfath, born on the afternoon before the most HUGELY important day for ALL Australians, ANZAC Day, April 25.
I know where I can take him to see 'space stuff', Tidbinbilla Space Tracking station, 400 miles away, outside of our national Capitol, Canberra.
It's my turn to be 'Uncle'.

Here's was our local Super Connie when I was a kid.

In terms of economy, I submit a link to LowTech Magazine. You turned me on to this a while back. It seems the average passenger jet is just now hitting the efficiency of the Super Conny.

I remember watching the C-121's and especially EC-121's on Guam in '67-68 when I was a kid. We flew out in a Super Connie from the Bay Area to Pearl Harbor, Midway, Wake, and then to Guam. Loong flight! I've always thought they were one the most beautiful planes ever built, and I think they sparked my lifelong interest in aircraft. I'm glad a handful are still around and flying.