Today's award goes to the official censors in China.  The Telegraph reports:

Following the recent California summit between Barack Obama and Chinese president Xi Jinping, Chinese micro-bloggers picked up on an uncanny resemblance between a photograph of the two presidents strolling through the Sunnylands estate and a cartoon image of A. A. Milne’s cartoon creations. 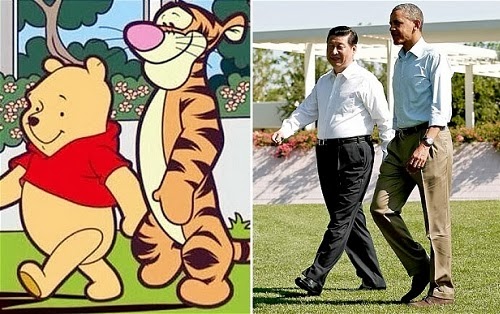 The two images were published side by side this week on the Twitter-like Chinese social media site Weibo.

But the posts were almost immediately “harmonized”, as censors appeared to take exception to the comparison between their president and a podgy bear who once roamed Sussex’s Ashdown Forest.

Hong Kong’s South China Morning Post said over-zealous censors had “nipped in the bud what could have been a positive PR campaign tailor-made for President Xi Jinping.”

Earlier this month, authorities targeted a photo-shopped image ... of the famous Tiananmen Square photograph in which a lone protester faces down a line of tanks. 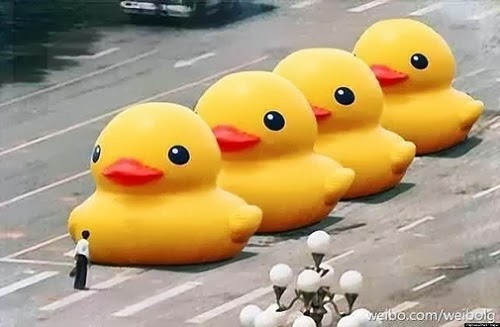 The image - in which the tanks were replaced with giant rubber ducks - irritated authorities enough that not only did they remove the picture itself, they also blocked all internet searches related to the squeaky bath toys.

When Big Brother proves to have no sense of humor at all, he makes himself into a figure of fun without needing anyone else's help!