Vietnam - gunfire in the night


In April 1970 James Hensinger took a series of photographs showing US troops engaging snipers on a hillside near Phu Tai in Vietnam at night.  He took them with a Nikon camera, resting it on the sandbags around his guard tower and using time-exposures, triggering the shutter with a cable release.  He sent the unprocessed film home, and didn't know what he'd managed to capture until he got home after his tour of duty and developed it.

The Guardian has now published a series of his photographs.  They're remarkably clear, lit by the gunfire and flames of the engagement.  Here's the first, to whet your appetite.  I've reduced it in size to fit this blog. 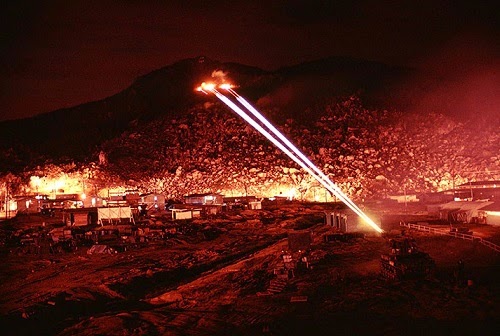 There are more images at the link.  Recommended viewing.

By the way, what's the tank in the foreground of that picture?  I presume it's an M48 Patton, because only bridge and engineer versions of the later M60 were deployed to Vietnam.  Can anyone confirm?  You'll probably have to consult the larger versions of his pictures at the link to be sure.

EDITED TO ADD:  Thanks to commenter Lance R. Peak for pointing out that there are larger versions of these pictures, and a couple of additional images, at the Daily Mail.  The Mail identifies the tank as an M42 Duster, fitted with twin 40mm. Bofors cannon.

The one shooting on the right?

It's a 'Duster" AA track on the m-48 series tank chassis.

Richard is right. I count 5 road wheels, which the Duster had. The M48 had 6.

Richard is also wrong, since the Duster was built on the M41 light tank, not M48 medium.

And the color of the shells from it, the number of them in each frame, and the fires left on the hillside, all say as pair of 40mm auto-cannon going to work.

The Daily Mail link refers to it as a M-42 Duster AA Tank.

Yea, I agree with Bart Noir.

The M42 "Duster" mounted 2-40mm cannon and was employed by the U.S. Army in numerous Vietnam engagements.

It was a great Fire Base defensive weapon and each "Duster" fired 40mm point detonating explosive rounds up to 4,000 meters at a rate of 240 rounds per minute.

Of course, the USMC had another great tracked weapon, the M50 "Ontos" which mounted 6 -106mm recoiless rifles. Unfortunately it was very lightly armored and had to be either positioned static behind a defensive berm or be very lucky.

Both of these tracked weapons, along with the M45 "Quad 50's" were used in the Marine defense of Khe Sanh, athough the Dusters and Quads were operated by elements of the Army 108th artie group.

Late to the game, but yep--M42 Duster. real handy for hosing down suspected sniper hides and covering perimeters. Almost bought one (non-running but complete) about a decade ago from a museum but they backed out of the deal when they got a better offer.

I love the photo spread.

In first glimpse of that picture I heard the sound effect of the Martian heat ray from the 50's movie version of War of the Worlds.