Ever wanted to 'knock someone up' for a living?


I remember my early encounters with American-English with some amusement.  Since I spoke (and largely still speak) English-English, some expressions (I learned) didn't translate very well.  There was the time I said to an American lady, who wanted to see the sunrise from a well-known vantage point, "Sure, I'll come by and knock you up at 5.30 tomorrow morning."  From the utter horror on her face, I deduced that to 'knock someone up' meant something a little different on this side of the Atlantic to what it implied on the other side (where it meant, and still means, to knock on the door, or telephone them, or attract their attention in some way).  Her friends, giggling madly, had to explain what I'd apparently offered to do to her.  I think she found it hard to believe my attempts to excuse myself . . .

Be that as it may, there's proof of my innocence at last!  I knew that during World War II, one of the professions in demand among civilians was to be a 'knocker-up'.  This person's job was literally to go around the streets, knocking on doors and windows to wake up workers for the early shift at war production plants.  With so many men in the armed forces, women were hired for the job in unprecedented numbers.

In a fascinating photo essay titled '11 Jobs That No Longer Exist', Imgur includes pictures of actual 'knockers-up'.  Here are two of them. 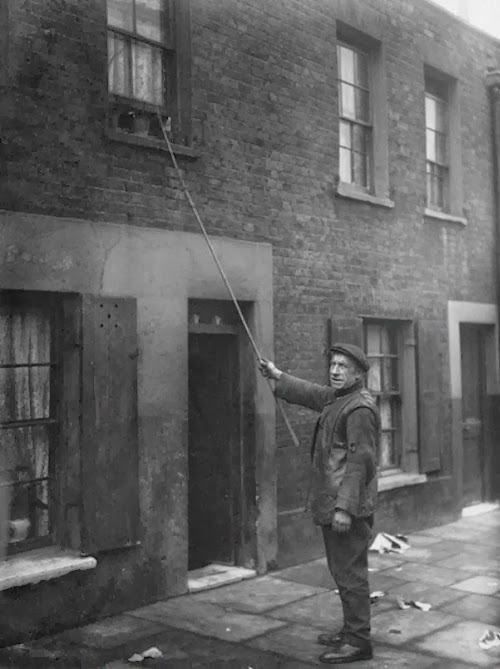 There are more photographs of long-extinct jobs at the link.  Interesting viewing.

(And for the guys who thought the headline to this post meant I was offering a rather more interesting job opportunity . . . sorry, you're out of luck!)

Years ago, working in a small Northern Ontario railway town, the company had a "call boy", whose job was to ride around town andwake train crews for their next shift.

I do not recall that a girl ever held the job...Audrey Hepburn did it so much better on film.

Separated by a common language...

Even if I did want the more common American version, I can't. After child #3 the good wife marched me in and sat me down. Not more kids for the big guy.

Oh well. I'm still a pretty good shot and can fix anything so there is that.

The title got my attention, but then I figured that if they've actually got to pay someone for doing it, it's probably not as much fun as it sounds. Now I can't get the image of a pregnant Rosie O'Donnell out of my mind and I'll be that you can't, either.

As opposed to getting knocked up for a living, i.e. welfare.

It works the other way too. One of my daughters is currently teaching in Belgium and her friends, for the most part, are from English speaking countries other than the US - Canada, Ireland, England, etc. The incidents are getting fewer but she still laughs at the looks of horrified delight when she called something a fanny pack.

I remember briefing some blokes at GCHQ back around '92 about the new fangled "firewall" thingies. When I mentioned the "Belt and Suspenders" configuration and everyone snickered, I figured we didn't speak the same language.

Who knew I had a second calling! I operate as a Lector where I work. While I'm fixing the pc issues at work, I try to entertain my captive audience with humourous, light banter. It's a bit uncomfortable to sit in someone's chair and fix what they can't. So it's more for my benefit than theirs. But it didn't know it used to be a job. More resume' info.