So much for the economic 'recovery'

I'm obliged to Karl Denninger for linking to an article in the Wall Street Journal's Grand Central economic blog titled 'A Letter to Stingy American Consumers'.  Its author asks tongue-in-cheek why US consumers aren't spending money.

This is The Wall Street Journal. We’re writing to ask if something is bothering you.

The sun shined in April and you didn’t spend much money. The Commerce Department here in Washington says your spending didn’t increase at all adjusted for inflation last month compared to March.

Do you know the American economy is counting on you? We can’t count on the rest of the world to spend money on our stuff. The rest of the world is in an even worse mood than you are. You should feel lucky you’re not a Greek consumer. And China, well they’re truly struggling there just to reach the very modest goal of 7% growth.

The Federal Reserve is counting on you too. Fed officials want to start raising the cost of your borrowing because they worry they’ve been giving you a free ride for too long with zero interest rates. We listen to Fed officials all of the time here at The Wall Street Journal, and they just can’t figure you out.

Please let us know the problem.

I don't think the author expected the number and tone of the responses he got.  They're blunt and to the point, and illustrate more clearly than any 'expert commentary' the real doldrums into which our economy has fallen.  Here's just one of them, to illustrate the point.

Wow Jon, is this the most sarcastic thing you've ever written or does this actually represent the Fed and now by extension your logic/thinking?

The American consumer is apparently smarter than you, Wall Street or the Fed have given them credit for. There are so many things wrong with this editorial it's hard to know where to start but a numbered list will have to suffice.


1. This "recovery" you speak has largely been in the inflating of asset prices, stocks and some housing. The majority of the US "middle class" (or what's left of it) have not enjoyed any significant change in their wealth due to this.
2. If you are sitting in a house that has increased in value you'd have serious short term memory deficit (of which you seem to think 5 years is a long time) to take out an equity loan on your house to consume unnecesary goods. Yeah, that worked out so well for Americans the last time they did that....underwater loans anyone?
3. The fabulous jobs recovery you are always speaking of, is in low paying, part time, service jobs. Show me where good paying actual middle class jobs have been created beyond the wall street brokers and real estate brokers benefiting from easy money policy.
4. Please go out and measure actual real inflation (not the constantly changing definition that the Fed uses) and you'll see the prices of everything have risen, in some cases dramatically (see health care premiums) and you might understand why Americans aren't spending on anything beyond the necessities.
5. Virtually none of the measures of economic growth have had any real impact on average Americans.
6. You're really going to point to Greece and say we don't have it as bad as them??? but you somehow want us to spend money we don't really have to juice the economy, which is exactly how Greece got into it's own troubles.
7. At what point do you recognize that the Fed's policies have done nothing for the real middle class American consumer and there' zero interest rate policies are destroying the elderly and bottom tiers of the middle class who are trying to build some savings.
8. Your letter here is almost as bad as Ben Bernanke's blog post this week, trying to defend the Fed's actions and dodge the questions of why their policies have done so much for the wealthy and so little for the poor. He also doesn't seem to realize the poor have to use payday lenders not banks.
9. Finally, maybe this letter of yours was supposed to be submitted to The Onion instead of posted to the WSJ?


There are many more at the link.  I urge you to read them for yourself.  They're very illuminating.

They also illustrate the consequences of the Federal Reserve's policy of quantitative easing (i.e. 'printing money'), about which we've written here many times before.  Karl Denninger again, this time on the Fed wanting to raise interest rates, as mentioned in the WSJ article:

But here's the problem with "raising" interest rates (really withdrawing liquidity and therefore increasing the cost of borrowing, with the result that interest rates rise) -- marketable debt issued by the US Government (that is, where real money has to change hands) stands at just over $13 trillion today.

Let's presume that the blended rate goes up by 1%, to 4.4% as the Fed "lifts rates."  This is probably in the realm of "wishful thinking", incidentally, as it's wildly on the low end of what's likely to happen.

Along with a trillion or so in additional debt taken on (which should be about right for this fiscal year) this will increase the interest expense to $616 billion, an increase of 43% in interest expense!

The additional $187 billion will have to be issued in new Treasury debt since the government doesn't have $187 billion to pay it with which means that the expected debt increase is not $1 trillion, it's about $1.2 trillion -- a 20% increase in the actual deficit and a roughly 39% jump in the reported (falsely so) deficit.

What do you think happens when the market gets its arms around that?

Worse, what happens if the market decides that this means the government should pay even more as the path it is on and the interest offered does not compensate for the purchasing power destruction that is taking place.

And by the way, this is true and has been since roughly 2007: Purchasing power destruction last year as a result of government debt issuance stood at over 6%; there is nowhere on the interest rate curve that has a positive rate of return.

Now compound that effect out a couple of additional years and tell me how this works out for you and what the likely outcome will be when, not if, the market wakes up to this.

Mr. Denninger is telling it like it is.  All the unsecured debt issued by the US government to enable it to indulge in 'deficit spending' (i.e. spending money it doesn't actually have) has eroded the value of our currency by a frightening amount.  Of course, there have been other factors having the same effect.  Just look at how the value of a dollar, in terms of its purchasing power, has eroded over the past century or so. 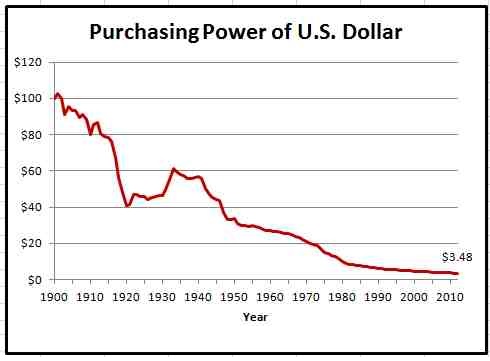 We, US consumers, aren't spending as much because we don't have it, and what we have is so inflated and rendered valueless by official policy decisions that we're holding on to it like grim death, lest even that be taken away from us.  What does that mean for the future?  Nothing good.

EDITED TO ADD:  Read Karl Denninger's latest column to see how you're likely to fare if you're between 40 and 65 years old today.  He lays out the destruction of the value of our currency as it's going to affect you, and all of us.  It's scary - but mathematically inevitable if we don't straighten up and fly right.  Under our present 'leadership', that's unlikely in the extreme.

The comments alone are worth the time to read. You are correct, the train is coming off the tracks, and no one in Washington has the brains or courage to stop it.

Even if it was satire, which it was, the Journal still got schooled (as my students would say). My personal fantasy is to put all the Wall Street darlings and Central Bank people on my income and send them out to get groceries, pay the utilities, et cetera for a year and then see if they can still prattle about how great the economic recovery is. And saying that the US is better off than Greece is a bit like saying the USS Nevada was better off than the USS Arizona because the Nevada managed to get underway for a few minutes before she beached!

The big problem is the level of self deluded fantasy evident in all of this. To believe that there is any slightest hope of "recovery" is beyond delusional. Or did y'all think that the governments buying of two billion rounds of ammunition was a political ploy in furtherance of gun control? I know that you have spent your entire adult life working in furtherance of this "system"; but sheesh man, this system is broken WAY passed any hope. "Getting a grip" , Voting or government(s) won't save us now. In fact nothing can or will. The post WW2 "prosperity" debt binge is over, its wealth pissed away in a century of war profiteering ,greed ,stupid social experimentation and corruption on an epic scale. Its time to pay the check, and G_D help the children ,because they will suffer greatly for our self indulgence. But for us elders; After 70 years of greedy self interest, welfare, social security theft, Medicaid theft and selfish "me" "isems" we deserve what we get. We have stolen our children's inheritance for generations to come. Its our fault that the world is in this mess, and its passed time we own up to that. Too bad most never will.---- Ray

Well the USS Nevada *was* better off than the USS Arizona because she not only survived the attack, she was refloated and refurbished, and then went on to serve with distinction to the end of the war.

At a micro level recently purchased two replacemen single filament light bulbs for backup lights on a car. Made in China, they were over $7.

Right, Roy, I should have specified on December 8, rather than in the long term, when I wrote my example.

Perhaps I am a stupid optimist, but I hope we can eventually bring the US economies (financial, moral, spiritual) back to the point where progress is real and things are improving, not just on the Fed's computer models.