I wrote to Tom Doherty and two executives at Macmillan yesterday.  I haven't had a reply from any of them, so I hope the e-mail reached them.  The silence is deafening.  I didn't make this an open (i.e. public) letter, but it said basically the same thing as my earlier missive.  If this issue gets to the boycott stage next week, I'll publish it here for those who may be interested.

It would appear that there may now be more Macmillan involvement with Tor's day-to-day management than before this crisis erupted.  Another observer reports that Irene Gallo's profile on Twitter now looks like this: 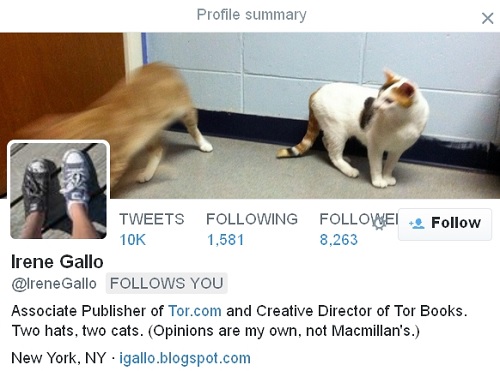 She lists her job titles at Tor, but then asserts "Opinions are my own, not Macmillan's."  Is this a sign that Tor's parent company in the USA is now calling more of the shots?  Perhaps.  If so, the situation is certainly serious enough to justify that, to my mind at least.  We'll see.

There's also been a comment on Reddit that may (or may not) be from an employee at Tor.  I personally discount it, as I don't believe there's any way an official comment could have been issued and remained unretracted for this long if there'd been an internal error.  Still, it's out there.  Make of it what you will.

Sarah Hoyt, a friend for whom I have real respect, published an excellent article this morning that in part addresses the current situation at Tor and elsewhere.  I urge you to read the whole thing - it's worth your time.  In it she made this point:

People are talking of boycotting Tor. That’s silly. This is not Tor. This is “all traditional publishing except for Baen” and a few authors at other houses. I will continue reading authors from Tor ... whose politics are of little concern to me because their worlds breathe and live.

I'm afraid that, despite my respect for Sarah, this is where she and I differ in our approach.  As I commented on her blog:

The only place I disagree with you is concerning a boycott of Tor. Sure, other traditional publishers are as bad; sure, it’s a widespread problem. However, we can’t handle all of them at once. I’m from the African school of life. “How do you eat an elephant? Mouthful by mouthful.” I’m more than willing to make Tor the first mouthful.


I really mean that.

I wonder whether Tor's and Macmillan's lack of response to my letters, both public and private, is because they think I don't mean it?  Do they think I'm just 'small fry', not worth bothering about?  Do they think my words are 'a tale told by an idiot, full of sound and fury, signifying nothing'? Do they think I'm making an idle threat, or don't have any support?  Time will tell.  I know what other authors and individuals in the SF/F community have said to me.  Let's see whether they back up their words with action.  Whether they do or they don't, I know what I'm going to do if the situation doesn't change.  (See edited addition below.)

Honor is a terribly old-fashioned notion these days . . . but I was raised to live by it.  Sometimes honor demands that one act, irrespective of any other consideration.  If Tor and/or Macmillan have not acted by Monday, I shall.

EDITED TO ADD:  It seems that some commenters at another site, where the second-last paragraph above was reproduced, think I've got an inflated sense of my own importance to expect a reply from Tor or Macmillan.  No, far from it.  What I'm talking about is basic customer service and common decency (yes, I know the latter is un-common these days - more's the pity).  If a customer writes to any company to complain, particularly over something that is false and libelous, it's the very least that company can do to acknowledge receipt of the complaint.  AFAIK, hundreds of e-mails have been sent to Tor and Macmillan over this issue;  and of those sent by individuals I know, not one has been acknowledged, let alone received even the most cursory reply.  Customer service FAIL, right there.

As for my requests for action:  if it's 'an inflated sense of one's own importance' to expect an apology for libelous and false accusations, and look for steps to be taken to ensure it doesn't happen again . . . well, I guess that makes me guilty.  Too bad.  So sorry.  That's not about to change.  I happen to make a point of apologizing if I unjustly or unfairly insult or offend anyone.  So do most people I know.  Clearly, we're out of line with current thinking and social mores by doing so.

I'm going to suggest to your readers that paper carries more impact than pixels, particularly when it comes to making a rational, reasoned, and firm complaint.

This is a lack of leadership at TOR plain and simple... And we may be few, but we can pump up the signal!

If you really meant what you said then just start the boycott already........ why is Tor and Macmillan not responding to you? Because they don't have a response that can satisfy both sides, and all they can do is to wait it out. They are betting that people like you and the other sad puppies wouldn't bite them as viciously as the SJWs will, so siding with the SJWs is the best way to minimize their losses. You need to drill into the heads of the people at Tor and Macmillan that peaceful coexistence with the SJWs isn't an option and you are willing to burn them down as much as the SJWs will, that's the only way to get them to wake up.

Don't put too much emphasis on that She lists her job titles at Tor, but then asserts "Opinions are my own, not Macmillan's." Is this a sign that Tor's parent company in the USA is now calling more of the shots? it's essentially standard disclaimer every place I've been and heard of. Gives the company plausible deniability case in case of lawsuit.

The reason I never mention exactly where I work is that if I do, (or if, God forbid, I ever post from work), I'm required to say pretty much the same thing. It was the same policy at my previous employer, so stretching back to 1990 or so.

I think the standard disclaimer would be "My opinions are my own, not Tor's." That she specifies Macmillan instead of Tor as the company that her opinions aren't might be significant.

The complete cluelessness here about both the law and how a major publishing company functions is vast.

Please Connie enlighten the unwashed masses with your knowledge. Otherwise it's no more than an evidence-free assertion.

As I have written on other blogs, it might be time for the authors agents and attorney's start to officially contact Macmillan and TOR's management with questions that need to be answered as it seems that Macmillan and TOR employees are not working in the best interest of the author and agent.

@Anonymous at 12:37 AM: You, Sir/Ma'am, are spouting the usual SJW line with not a single shred of reality to back up your opinions. You don't even have the courage to put your name to them. That makes them worthless, so I'll treat them accordingly.