The doomed 'lost expedition' to the North-West Passage of Sir John Franklin has long fascinated historians and nautical buffs.  There were no survivors.

In 2014 the wreck of one of Franklin's ships, HMS Erebus, was discovered.  Since then the search for the other, HMS Terror, has continued - and has now been crowned with success.  In the process, it looks as if the presumed history of the 'lost expedition' may have to be re-written. 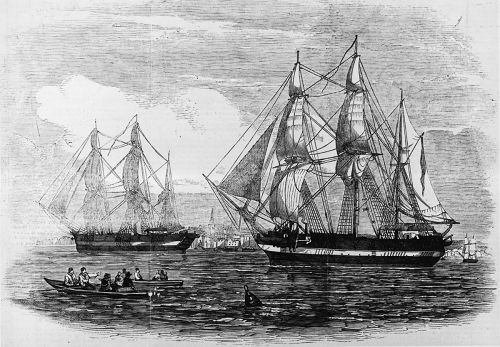 The long-lost ship of British polar explorer Sir John Franklin, HMS Terror, has been found in pristine condition at the bottom of an Arctic bay, researchers have said, in a discovery that challenges the accepted history behind one of polar exploration’s deepest mysteries.

On Sunday, a team from the charitable Arctic Research Foundation manoeuvred a small, remotely operated vehicle through an open hatch and into the ship to capture stunning images that give insight into life aboard the vessel close to 170 years ago. 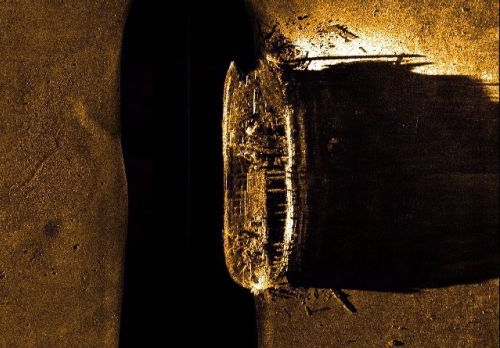 Side-scan sonar image of HMS Terror on the sea floor


“We have successfully entered the mess hall, worked our way into a few cabins and found the food storage room with plates and one can on the shelves,” Adrian Schimnowski, the foundation’s operations director, told the Guardian by email from the research vessel Martin Bergmann.

“We spotted two wine bottles, tables and empty shelving. Found a desk with open drawers with something in the back corner of the drawer.”

The well-preserved wreck matches the Terror in several key aspects, but it lies 60 miles (96km) south of where experts have long believed the ship was crushed by ice, and the discovery may force historians to rewrite a chapter in the history of exploration.

A long, heavy rope line running through a hole in the ship’s deck suggests an anchor line may have been deployed before the Terror went down.

If true, that sets up the tantalising possibility that British sailors re-manned the vessel after she was abandoned at the top of Victoria Strait in a desperate attempt to escape south.

A scrawled note dated 25 April 1848, and concealed in a stone cairn at Victory Point on northern King William Island, said Erebus and Terror had been abandoned three days earlier, stuck in sea ice.

Crozier was in command of “the officers and crews, consisting of 105 souls”, because Franklin had died on 11 June 1847, the note continued, “and the total loss by deaths in the expedition has been to this date 9 officers and 15 men”.

Crozier and Captain James Fitzjames signed the note, which had what seemed a hurried postscript, scrawled upside down in the top right corner: “and start on to-morrow 26th for Back’s Fish River”.

Survivors apparently hoped to follow the river – now known as Back river – south to safety at a Hudson’s Bay Company fur trading outpost.

None made it, and for generations, the accepted historical narrative has described a brutal death march as the Royal Navy mariners tried to walk out of the Arctic, dying along the way.

Now Franklin experts will have to debate whether at least some of the dying sailors instead mustered incredible strength, fighting off hunger, disease and frostbite, in a desperate attempt to sail home.

Here's some video footage of the discovery.

The ships themselves are of historical interest even without their connection to Franklin.  They were originally constructed as so-called 'bomb ketches', carrying two large, heavy blackpowder mortars in their waists, designed to bombard shore installations by dropping heavy exploding shells over obstacles and inside fortifications.  Wikipedia notes:

Bomb vessels were traditionally named after volcanoes, or given other names suggestive of explosive qualities. Some were also given names associated with the underworld. Vessels of other types which were later converted to bomb ships generally retained their original names.

Bomb vessels were highly specialized and expensive to fit out and maintain, and only marginally suited for their secondary role as cruisers. Because bomb vessels were built with extremely strong hulls to withstand the recoil of the mortars, several were converted in peacetime as ships for exploration of the Arctic and Antarctic regions, where pack ice and icebergs were a constant menace. Most famously, these ships included HMS Erebus and HMS Terror. In this case, the volcanoes – Mount Erebus and Mount Terror on Ross Island in Antarctica – were named after the ships, instead of vice versa.

Franklin's ships were most recently commemorated in the Royal Navy by two monitors, also intended for shore bombardment.  They were built during the First World War, and served into (and, in one case, beyond) the Second World War.  Here's HMS Terror's most recent namesake, sunk in 1941 in the Mediterranean.  (Click the image for a larger view.) 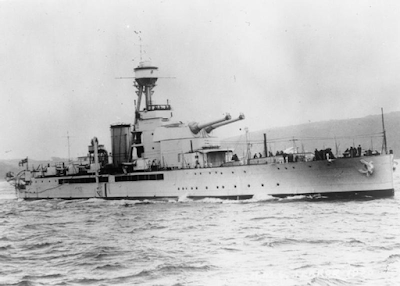 There's a lot of history behind those names, and behind this discovery.

The Franklin expedition has also been a rich field for fictioneers to plow, including (of course) Clive Cussler. Dan Simmons' "The Terror" is a delightful creepy and claustrophobic horror take on the story.

It would be interesting to see how well the bottled wine had aged over the years.

Fascinating, Peter. Gives me hope that the wreckage of that Malaysia Airlines Boeing 777 will be found ... sometime next century.

Thanks, Peter!
I recently read a book about the investigations of graves from the expedition. As may have been expected in the climate, the degree of preservation of the bodies was considerable (they'd been buried in a deep freeze, after all).
I look forward to learning more about this discovery.
Old Indian (up there, I suppose they'd be called "First Nations") legends spoke of seeing at least one of the formerly-icebound ships afloat & in motion. It's long been assumed the the melt-freed ship was just drifting, but who knows?
Excellent post!
--Tennessee Budd