My mom would have boxed my ears instead


I suppose, in this day and age, non-corporal punishment is the norm . . . but it still seems to me that a California teenager got off lightly.

It was a morning that any mom with a teenager could relate to, said Nicole Poppic, a 34-year-old veteran and mom of three in Northern California. While her son Alex, 10, and daughter Sammi, 4, were ready and waiting to leave for school, Poppic's oldest child, Cara, 14, had overslept, and then she spent even more time arguing with her mother about, well, everything.

"When we finally got in the car and I looked at the clock and realized that we were running late, I started doing the 'mom' thing," Poppic told TODAY Parents. "My lecture went something along the lines of, 'You need to start thinking about other people, Cara. You are not the only person in this family, and you made your brother and sister late, too."

Then Poppic heard Cara’s favorite band, Panic! at the Disco, start playing from the passenger seat of the car. "That is when I saw that Cara had put in her headphones and was staring out her window, completely ignoring me," she said. "I reached over and took her phone off her lap, unplugged her headphones, and threw her phone out the car window."

But in case that maneuver doesn't convince you that Poppic is winning at parenting, she went one step further: after making Cara wait while she dropped off both her younger siblings at their school, Poppic wrote her daughter a tardy note that told the attendance office at Cara's high school the unvarnished truth about their morning from her perspective:

After she returned home, Poppic retrieved Cara's phone from the neighbor's yard no worse for the wear and posted a photo of the letter to her Facebook page, where it has been liked more than 7,000 times and shared over 32K times since the beginning of September. 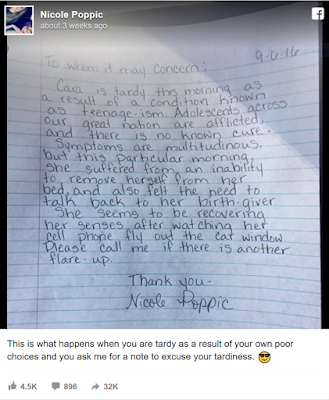 My parents wouldn't have wasted time on gentle persuasion.  They had a rather more robust style of parenting!  (It was a different world in those days, of course.)

My mother won't have written a note at all; nor would she have taken me to school. I would have had to walked the five miles because I missed the bus. You screwed-up; you deal with the consequences. As for ignoring my mother when she was talking to me? Hell hath no fury!

I makes jokes about me being a "wooden spoon survivor", but it was no laughing matter...those things HURT

I still remember my last "lashing". I was laying on the living room floor watching the TV and Gran calls out a request as to the status of the door locks. Replies my 13 year old self, in a disrespectful tone, "I don't know."

Next thing I knew Mom is standing over me with the belt, telling me in no uncertain terms to "Get off my lazy duff and go check the door and then go apologize to Gran!" Punctuating each word with a stroke of the belt.

I knew I deserved what I got and haven't forgotten it to this day.

My maternal grandmother grandmother who babysat us frequently was fond of the go down the creek and get a willow switch method. Me being rather stubborn and fond of mischief heard that a few times. Mom liked the wooden spoon and dad preferred his belt. The only one I didn't get from much was dad.

Peter, ours are now grown & on their own (one a young U.S. Marine, & he appears to be becoming a fine young man). As little as 10 years ago, we used "robust" methods, & they worked. The grandkids have been made aware that corporal punishment isn't the default, but it is an option if other methods fail.
Now, in the situation described, I'd have been slapped silly. I was only struck so once or twice (and deservedly), but his would be an instance for it.
--Tennessee Budd
By the way, I'm 51, so this isn't one of those back-during-the-Depression accounts.

Cure for Teenage disobedience = destruction of expensive property? She couldn't just lock it up for a few weeks? I have seen this before. This is a punishment on the Dad who will have to pay for buying a new phone.

I think I was about ten years old before I found out a "fly-swatter" was for killing flys.

My mom never sent me for a hickory switch because we lived in the city. But the words: "Go get my fly-swatter!" was the harbinger of doom.