Back in 2015, I called for a boycott of Tor Books, because one of that company's editors made scurrilous and completely untrue remarks.  Despite efforts to get the company to deal with the situation, that wasn't done to anyone's satisfaction.  (You can read all my posts about the issue, in reverse chronological order, by clicking this link.)

The root of the problem was liberal dominance (and manipulation of) the Hugo Awards.  Groups opposed to that included the Sad Puppies (formed by Larry Correia's fans, and joined by many others) and the Rabid Puppies (led by Vox Day, and rather less willing to compromise and 'be nice' towards the Social Justice Warriors who infested - and still infest - halls of mainstream-publisher-science-fiction.  I've never been a member of either group, although I certainly supported the Sad Puppies' campaign.  Furthermore, the Sad Puppies did not join my call for a boycott of Tor Books, although the Rabid Puppies did.

Amid all the unpleasantness about Tor and the various Puppy denominations, one amusing streak ran through the debate.  Declan Finn wrote a series of satirical posts on his blog portraying (highly) fictionalized SJW attempts to attack, silence or control various Sad and Rabid Puppy figures.  Most of them were very funny, and I enjoyed reading them.  (Yes, Miss D. and I were portrayed in one of them.) 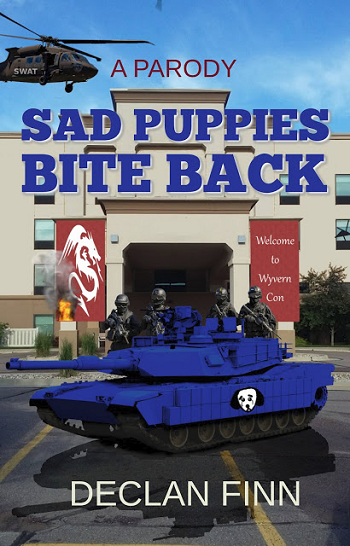 'Sad Puppies Bite Back' is free for Kindle Unlimited subscribers, and very reasonably priced for everyone else.  I've been enjoying re-reading Declan's wit, and chuckling all over again.  He had a lot of fun with this, and I daresay you will too.  Highly recommended as light, entertaining reading.

*sigh* I am being held hostage to my Kindle. This one's going on the stack. (maybe start right after Somewhither) Oh, and I enjoyed "Brings the Lightening" tremendously.

Grabbed it on my unlimited, should get to it in a day or so. Since I have over 600 books on my unlimited wish list I hesitate to put something this good on it to be buried. With only 10 unlimited download slots competition is fierce to get downloaded and read.