Last week Dr. Joseph Sakran alleged, in an article in the Baltimore Sun, that an implied death threat had been placed on his car.  On Twitter he provided a picture of the printed threat, and another of it placed beneath a windshield wiper on his car.  (He's since deleted the Twitter images.) 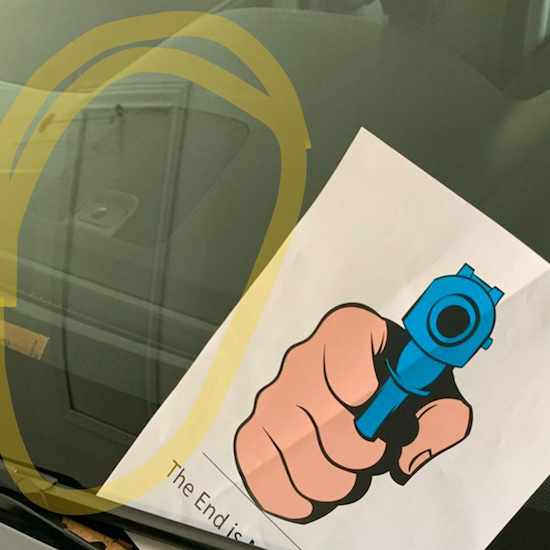 Astute Twitterati observers analyzed the images.  They very quickly realized that the reflections in the windshield, and the surrounding environment, showed that the vehicle was parked in a domestic garage (presumably his);  and the photograph of the paper, taken in what looked like a normal home, showed his bare leg.  In other words, they gave the appearance that he'd printed out the "threat" himself, in his own home, while wearing little or nothing, then put it on his vehicle's windshield himself before taking the photograph of it.  To add even more evidence, according to some commenters, the photographs' EXIF information showed that the picture of the pristine, newly-printed paper in his hand had been timestamped before the one of the paper on the car.  This gave the appearance that he'd printed the paper, then placed it on his vehicle.  What's more, the paper showed no weathering or signs of having been blown around in the wind of the car's passage, making it unlikely to have been placed there days before he took the pictures.

Pro-gun activist David West has put together this video report showing what he alleges is Dr. Sakran's fraudulent claim.

Of course, Dr. Sakran hasn't bothered to reply to these allegations.  Instead, he deleted his tweets, and went on to pontificate about the "threat".

After finding the alleged threat in his car, Sakran said, he took a couple of pictures — placing it back on his windshield for one — and then threw it in the trash, ready to ignore it. On Saturday, he changed his mind.

In a thread of tweets, he talked about partners he has worked with in preventing gun violence, and patients he has cared for.

“We have the opportunity and the responsibility to make communities safer for Americans," he wrote. "For the person who thought they could Silence me by threatening my life, you clearly know nothing about me..... Thank You for showing me that our movement is making a difference.”


Fortunately, deleting his tweets didn't erase the evidence.  The Internet is forever, and enough people had made copies of them that they've been preserved.

Isn't it amazing how often such allegations are made by or about leftists, concerning alleged "threats" offered to them, and are used to whip up support for their positions?  They seem to make a habit of it.  Fortunately, in today's online world, with lots of investigative tools available, falsehoods can usually be detected - at least, so far.  Sadly, if enough of them make enough mistakes in their claims, leading to exposure, the rest will learn from them, and get better at it.

"“We have the opportunity and the responsibility to make communities safer for Americans," he wrote. "

What would this member of the Leftist hive-mind know about being American?

From the Wiki: Joseph V. Sakran is an American trauma surgeon and gun control activist. A graduate of Ben-Gurion University of the Negev Medical School for International Health, he also holds degrees from the Harvard Kennedy School, Johns Hopkins University, and George Mason University.

But lies, deceit, fraud, and slander, are all quite virtuous when done for the "greater good".

Dr. Sakran,
Please consider the results from Germany 1933.
The Nazis certainly made Germany (and the world) much safer when they disarmed the populace.

Whitey beat me up.

My black church burnt down by whites (mostly untrue, but some are true, but most are NOT!)

Poor black/gay/muslim/whatever child (teenager who is 15-19) is beat by cops...

Poor good boy (secret word for drug dealer or user) or good girl (secret word for prostitute drug user used as a mule) was just going to church/school/the library/going to open a business/supported the whole family...

The father of my kids beat me and the kids, look at the marks.

These are the lies they tell us.

Sorry. Your gay son died because he was dealing drugs. Your hijab was removed by your friend. You burned your own church down. You spray painted Nazi symbols all over. Your 'child' was trying to kill someone. 30K showed up for your political rally (that's one of the all-time lies) And, you hurt yourself to jam him up with domestic violence charges (or got hurt because he was defending himself.)

Lies, lies and more lies. They don't even have the decency to attempt to make it look real. Almost like... they have no touch in reality.

Until we start treating fake crimes as real crimes, this will not stop.

Scream Hate Crime after faking it? Get charged and punished for Hate Crime.

Scream Rape after faking it? Get charged as a sex offender.

Scream White Arson after doing it yourself? Get charged with hate crimes and arson.

Fake crimes should be stomped on as hard or harder than actual crimes, as they weaken the system and soil the jury pool for real crimes.

But.. No.. That won't happen, because, as Dan Rather basically said, The charges are 'Fake but Real.'