A friend sent me this photograph of octopus eggs, with the baby octopii clearly visible inside the egg sac.  I don't know where it first appeared.  Click the image for a larger view. 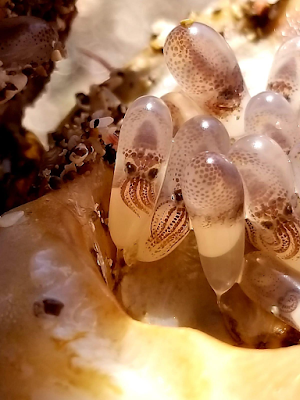 I've never seen so clear a view of those baby critters, although I've run (or swum) into them on the coast of South Africa many times.  One variety used to inhabit tidal rock pools, and if you stuck your foot in the water, clad in a tennis shoe, they'd zoom out from their hiding-places in crevices in the rocks and try to tackle your foot, thinking it was food.  They used to draw screams from the girls and laughs from the boys.  One of them seemed inordinately fond of pieces of bacon dropped into the water.  He (?) would come out for them every time.

(I suggested dropping a fried egg into the water along with the bacon, to give him a proper breakfast, but we didn't have any with us at the time.)

Was this photo taken recently, in Iowa?
.

Very interesting... One wonders if they are able to 'see' what is going on around them.

I'm more a squid man than an octopus man. (There's a squid in the comic strip "Lio".)

I've seen Youtube videos of octopi being born. The eggs sort of sit there, then you can suddenly see the little octopus' eyes, and then they burst out and swim away. Cool.