I was doing some shopping on Amazon.com the other night.  To my utter astonishment, one of my search terms returned not only goods for sale, but also a short movie titled "Kung Fu Wizard of Jesus vs. Undead Robot Nazi Werewolves".  A screen capture illustrating it looks like this: 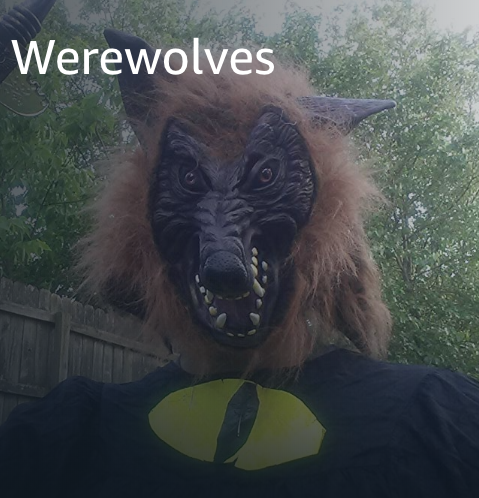 What's more, it's billed as a comedy!  I haven't watched it, because my belief in Christ is an obstacle to making him an irreligious figure of fun.  Nevertheless, the title brings in so many tropes and story elements that it boggles the mind.  There's even another film in the series titled "Kung Fu Wizard of Jesus vs. Flying Saucer Monster".  (No, I haven't watched that one either.)

What unlikely movie titles have you come across that have made you do a double-take?  Let us know in Comments.

The Attack of the Killer Tomatoes. Catchy theme song as well.

Ahhh memories. Back in the days of Blockbuster Video my local store had a whole big rack entitled "Le Bad Cinema" Holy cow, were there some fun stinkers in that bunch. The movies were so bad they were good. I remember "Frankenhooker", "Street Trash", "Surf Nazis Must Die" "Killer Clowns From Outer Space", "The Stuff".
The other rack that I loved was "Classic Cartoons". In addition to the classic Bugs Bunny, and Daffy Duck there were some strange and wonderful one-off pieces from the old Warner Brothers Studios. As a side line, when I was a kid in the late fifties & early sixties we used to see all the old WW2 toons on TV as well. Heartbreaking to realize that so much of that stuff is now disappeared lest some SJW Take offense at the content.

Yes, I did watch it years ago.

Yes, it is a musical.

Yes, it's quite possibly the worst movie in the world.

That screen shot looks like A.L.F. after a hard night’s partying.

Not so much a bad title as a gloriously schlocky new movie - "Iron Sky" on Netflix. Lizard-people Hitler riding a T-Rex on a rampage through the former Moon Nazi base.

Favorites of old - The Stuff, Ice Pirates, Attack of the Killer Tomatoes, Amazon Women on the Moon, The Adventures of Buckaroo Banzai Across the 8th Dimension, Mystery Men, Drop Dead Gorgeous, Lake Placid.

I'm not sure if there was ever a DVD, but how about 'Springtime For Hitler'?

Worst musical ever filmed still has to be "Paint You Wagon." The romantic leads, both singing?

Werewolves vs. Strippers. I bought it as a joke Christmas present for one of my sons a few years ago. Best line came as a werewolf spotted the strippers leaving a pub ' Look. Meals on heels'.

@Silent Draco
Hey, I own that on DVD. Me and the wife enjoyed it immensely. :)

No movie is worse than rollergator.

"ninja busters" was a movie I bought blind just off the title.