Feet on the dashboard = pelvis in pieces


I've seen many passengers in cars, light trucks or SUV's - almost always women in my experience - put their feet up on top of the dashboard, lean back in their seats, and drive along like that.  I've always regarded it as extremely dangerous, because in the event of an accident, they won't be able to stop their bodies from sliding forward, underneath their seatbelt.  Also, the airbags may slam their feet and legs into other parts of the vehicle, inflicting injury.

A recent accident in England produced this horrifying X-ray. 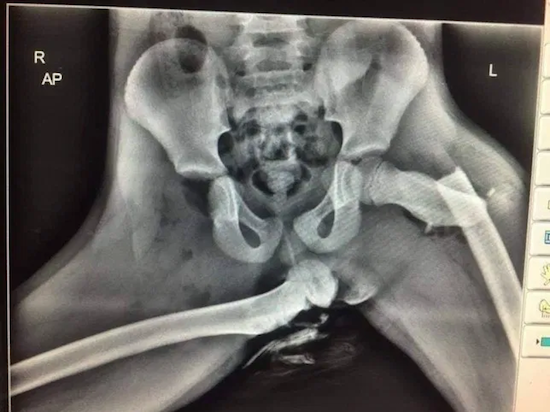 Police have released a picture showing the devastating injuries a young woman suffered when she was in a crash.

The victim, who has not been named, had her hips crushed because her feet were on the dashboard and not in the footwell.

One of her hips was broken while the other was dislocated.

The image was shared by sergeant Ian Price who said: ‘Here is an X-ray of horrific injuries sustained to the front seat passenger who had their feet on the dashboard at the time of a collision.

‘If you see your passenger doing it, stop driving and show them this.’

[A] local fire brigade added: ”Airbags deploy between 100 & 220 MPH. If you ride with your feet on the dash and you’re involved in an accident, the airbag may send your knees through your eye sockets.’

I'm going to show that picture to Miss D., and have a heart-to-heart chat with her about potential injury, pain and suffering.  I want her around for many years, preferably in one piece!

It is a small child, with as yet unfused ilia with the ischiopubes at the acetabula. Must have been quite a force to produce such a dislocation of the right femoral head, with a left subtrochanteric fracture. Substantial disruption of soft tissue structures is likely.

I've had victims I've transported from scenes that had their feet on dash, passenger side. Knees driven back into face by airbags. Horrific facial fractures and traumatic brain injuries..Never a good outcome.

You just changed my passenger riding habits for good!

You keep your feet in the footwell and your hands away from your face while riding in a car. This is as common sense as wearing the safety belt.

And then we have theses women riding with their feet out of the windows.

Then there is this person,
https://www.reddit.com/r/facepalm/comments/6g9hb8/good_way_to_get_a_face_full_of_rocks_during_a/

I never understood why people do that. You don't need to x-ray to see the potential pain in the event of accident.

When I was maybe in my mid-teens I read the story of a woman who had her feet on the dash during an accident. The airbag propelled her knees into her face, she suffered a sever brain injury, and is now permanently physically disabled and mentally handicapped.
I've since then never allowed my passengers to put their feet on the dash, recline the chair excessively, unbuckle while the car is in movement nor store heavy objects loose in the cabin.