Saturday Snippet: The sinking of HMS Prince of Wales and HMS Repulse in 1941


Americans tend to forget that Japan didn't only attack Pearl Harbor on December 7th, 1941.  She simultaneously attacked across a wide swath of the Pacific Ocean, including the Philippines, the Dutch East Indies and Malaya.  Britain had just sent to Singapore one of its most modern battleships, HMS Prince of Wales (which had recently played a part in the destruction of the German battleship Bismarck), accompanied by a World War I battle-cruiser, HMS Repulse.  Operating together as Force Z, they attempted to attack a Japanese landing fleet near Singapore a few days later, with disastrous results.

This description of what happened was written by then-Sub-Lieutenant (equivalent to the US Navy rank of Lieutenant Junior Grade) Geoffrey Brooke, a junior officer aboard HMS Prince of Wales.  He survived the sinking, and made a lengthy, dramatic escape from Singapore to India.  He returned to the Pacific aboard a British aircraft carrier in 1944, and took part in the naval and air battles off Okinawa.  After the war he published his memoirs, "Alarm Starboard!", which are very interesting reading for naval history buffs. 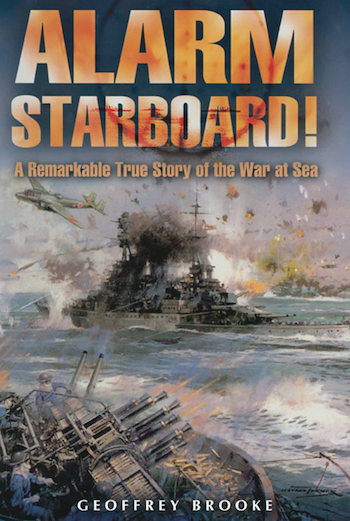 Here's what he has to say about the sinking of his ship and her consort on December 10th, 1941.


A sad tale, and a national tragedy for Britain in one of its darkest moments of World War II.  Coming as it did on top of the US naval disaster at Pearl Harbor, it was an enormous shock to both nations.  On the other hand, their mutual desire for revenge drove them to ever-greater efforts, culminating in victory in 1945.

S/Lt. Brooke's adventures in Asia were only just beginning.  He made a long escape through the islands of the East Indies, culminating in a long, arduous voyage aboard a sail-powered native trading vessel all the way from the Dutch East Indies (today Indonesia) to Ceylon (today Sri Lanka).  It's a powerful tale, well told in his book, which I recommend.

Interesting additional info on the Force Z sinking - the Pom Pom ammunition was not suitable for use in the tropics and literally fell apart with heavy use (like loading) and the Pom Poms on the two capital ships did not have tracer ammunition which allowed the Japanese aircraft to be a bit calmer in lining up for their attack runs as they could not see any return fire.

IIRC,all the fighter cover repelled the first set of attacks, or got in a furball with escorts. All fighters were refueling and rearming when the subsequent waves arrived. Land-based air didn't grasp Combat Air Patrol or covering convoys; no thought was given to rotation or sending a ready squadron to replace. MrGarabaldi noted rot: probably included the sick, lame, unfit, and the young. Applying the colonials' lesson from China - not cricket, eh what?

The comments by MrGarabaldi, Barry Jones, and Silent Draco deserve but one reply. RUBBISH!. I'll say nought but this. With an open mind and eye, read the history of those times.