On Iran, the Romans had it right


I'm sure many of my readers are familiar with the later Roman Empire's famous dictum, "Si vis pacem, para bellum" ("If you want peace, prepare for war").  It's derived from Vegetius' classic fourth-century text, De re militari ("Concerning Military Matters"). 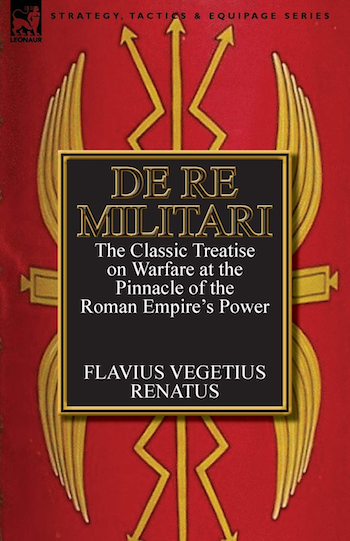 It's particularly apt to consider that reality when thinking of the targeted killing of Iranian general Qasem Soleimani by US forces in Iraq.  Soleimani was the leading terrorist organizer and controller in the entire Middle East, head and shoulders above all others in power, influence, intellect and ability.  The West had tippy-toed its way around him and his Iranian backers for decades.  President Trump finally took the bull by the horns and designated him as a target - and I think he made the right decision.  Cut off the enemy's head, and you're likely to inflict some serious damage.  No known, visible successor to Soleimani has the same abilities, to the same extent, as he did.  He will be very hard to replace.

I'm not arguing for a major US ground intervention in the Middle East.  I think that would be a needless waste of American lives.  After all, the one military commodity the Middle East possesses in great quantities is cannon fodder, and on the basis of historical evidence, their leaders aren't afraid to expend it if necessary.  Instead, the US should concentrate on isolating the nations concerned from the rest of the world.  There are many ways of doing that.  Some are military - blockading their coastline and ports, interdicting air traffic to and from them, striking essential economic targets to destroy their ability to function and to fight back, arming their neighbors to equip them to better defend themselves.  Others are non-lethal;  economic sanctions against terror-supporting states and all other nations that trade with them, restrictions on imports to and exports from terror-supporting states, diplomatic and political alliances against them, and so on.  I think both approaches are needed.  Which one will predominate will depend, largely, on the attitude and behavior of the targeted nations and groups.

Basically, however, we have to accept the fact that we've been at war with them for decades.  Too many Americans still resist accepting or understanding that - but it's true, and it isn't about to change.  Kurt Schlichter puts it strongly, but I think he's right.

The fact is that we have been at war with Iran since 1979. It’s just now we’re shooting back.

When a foreigner kills an American, somebody needs to die. And somebody did. The Iranians did not expect it. And this rocket-powered justice from above will focus their minds wonderfully.

Again, whether we should still be in Syria, Afghanistan and/or Iraq is a different question than whether we should turn a terrorist into goo – and one I’ve been clear on as far as my perspective. If you dare kill an American, you need to become a technicolor smear across a few dozen square meters of desert.

This could escalate, sure. Maybe a show of force will be met by force in response. But if we roll over like gimps, our weakness will absolutely draw force in response. And we are never going to get every single American out of the Middle East. We’ll always have embassies, business contacts, U.S. citizens with family and Americans who just damn well feel like going there who can be targeted.

You don’t get to hurt Americans. Ever If you do, bad things will happen.

Welcome to the Trump Doctrine.

We don’t want an escalation and we should show restraint where we can – but killing Americans must be a red line, a real one, not an Obama one. If this does escalate into a major confrontation, we need to keep some principles in mind. We need to do more than “send messages." Pain should be our message. Any strike should have a tactical (if not strategic effect). Hitting the arms caches means they have fewer arms, and they got the message. And we focus on destroying what the decisionmakers in Tehran care about: sink some capital ships, vaporize a bunch of aircraft, flatten a refinery. It’s even better when it can support the Persian patriots in Iran who want to hang their oppressors from the lamp posts.

“Proportionality” is a sucker’s game. Our goal should be pain. Screw with America and we hurt you, mullahs. Personally. Not just the idiots who do your dirty work. You and your toys.

Oh, and we should be aiding the resistance inside Iran, because someday – 40 years after that fool Jimmy Carter allowed the country to descend into theocratic tyranny – the people of that nation will take back their freedom. In the meantime, we need to reemphasize that the days of messing with Americans with impunity are over.

It's all very well talking peace, but only if the other side is interested in peace.  When they regard "peace" as either a surrender on our part, or an opportunity on their part to regroup, rearm, and prepare for further conflict, it's not peace at all - it's weakness.

The liberal, left-wing, progressive side of US politics doesn't appear to have learned that lesson at all.  I think they need to read a bit more from our ancient Roman ancestors.  They might learn something.

Tactically, strategically, legally, morally and politically not too much not too little just right.

We need to understand the enemy. They operate in a shame-based culture:

The groveling, ass-kissing, peace-pleeeeeease whining of the Left, TO THE ISLAMISTS, comes across as weak.

NITZAKHON - to anyone the grovelling, ass-kissing, peace-pleeeeeease whining of the left comes across as weak because it is.

With civilized folk, argue from a position of strength (my troops and weapons, or gardeners, or whatever are inferred, because we're both civilized. You have your strength, you know what strength I have shown you, are you ready to bargain?)

The less civilized the folk, the more your strength is openly shown.

And never ever whine, carry on, appease, act the lesser.

These rules work for bartering, for business deals, for showing the hood-rats who rules the roost and in politics (and war.)


As to shame-based culture, we live, or used to live in one, just the shame is/was more civilized. Shunning, subtle turning of the head away from the to-be-shamed and just avoidance, rather than honor-rape, stoning, murder.


We are very civilized. So because we, even when not whining and carrying on like a leftist, tend to argue with neo-barbarians like they are as civilized as us, the neo-barbs look down at us anyways.

Until the Trumpening. Not since the first Roosevelt, and maybe Reagan, have we had a president and an executive branch (finally) that treats the neo-barbarians and outright barbarians as they should be, with an armored fist holding thunder and lightning. Restraint when necessary, unleash the lightning when necessary.

And the world, especially our own leftists, are shocked and amazed...

Good. The barbs need to have one of their leaders impaled for all to see once in a while in order to quell the natural barbarian tendencies to, well, be barbarians.

Wasn't this a big point in one of Alan Drury's novels, with a terrorist goverment's leader carefully targetted? But in the book it was backed up by the warning that any retaliation would be followed by an overwhelming reaction - which was believed.

I have always wondered on why the US doesn't use assassination more often. If the foreign leaders would understand that they personally were at risk, I think attacks on the US would rapidly decline.