Back in 1979, Stephen Pile published "The Book of Heroic Failures".  It was billed as "The Official Handbook of the Not Terribly Good Club of Great Britain", and was riotously successful. 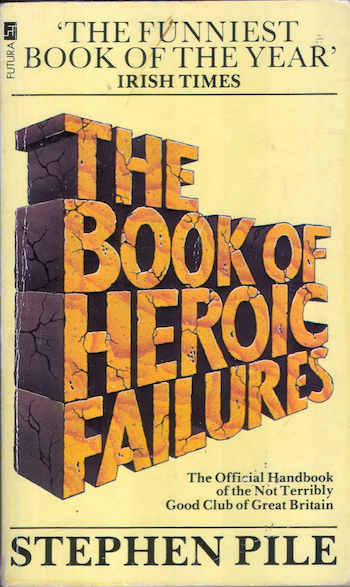 “Success is overrated. We all crave it despite daily evidence that our real genius lies in exactly the opposite direction. Incompetence is what we are good at. It is what marks us off from the animals. We should learn to revere it. All successful people are the same. You know, drive, will to win, determination … it is just too dull to contemplate, whereas everyone who messes up big time does so in a completely individual way. Doing something badly requires skill, panache, genius, exquisite timing and real style.”


I thought you might enjoy a few of the tales from the first book in the series.  It, and its sequel, are part of my library.

Worried that ground staff were stealing miniature bottles of whisky from a Pan-Am aircraft, security guards set a trap.

In the summer of 1978 they wired up a cuckoo clock inside the drinks cabinet, so arranged that it would stop whenever the door was opened.  This, they said, would reveal the exact time of the theft.

They omitted, however, to tell the plane's crew, with the result that a stewardess, Miss Susan Becker, assumed it was a bomb.

She alerted the pilot of the Boeing 727, who made an emergency landing at Berlin where eighty passengers left in a hurry through fire exits.

A Pan-Am spokesman said afterwards that the miniature bottles of whisky on the plane cost 17 pence each.


THE VET WHO SURPRISED A COW

In the course of his duties in August 1977, a Dutch veterinary surgeon was required to treat an ailing cow.  To investigate its internal gases he inserted a tube into that end of the animal not capable of facial expression, and struck a match.  The jet of flame set fire first to some bales of hay and then to the whole farm, causing damage estimated at £45,000.  The vet was later fined £140 for starting a fire in a manner surprising to the magistrates.  The cow escaped with shock.

In 1978 workers were sent to dredge a murky stretch of the Chesterfield-Stockwith canal.  Their task was to remove all the rubbish and leave the canal clear.  They were soon disturbed during their tea break by a policeman who said he was investigating a giant whirlpool in the canal.  When they got back, however, the whirlpool had gone, and so had a one and a half mile stretch of the canal.  In its place was a seamless stretch of mud thickly punctuated with old prams, bedsteads and rusting bicycle accessories.  In addition to this the workmen found a flotilla of holidaymakers stranded on their boats in a brown sludge.

Among the first pieces of junk they hauled out had been the 200-year-old plug that alone ensured the canal's continuing existence.  "We didn't know there was a plug," said one workman, explaining that all the records had been lost in a fire during the war.  "Anything can happen on the canal," a spokesman for the British Waterways Board said afterwards.


THE FASTEST FAILURE OF A DRIVING TEST

In the early 1970s Mrs Helen Ireland of Auburn in California failed her driving test in the first second.

She got into the car, said "Good morning" to the tester and started the engine.  However, she mistook the accelerator for the clutch and shot straight through the wall of the Driving Test Center.

(In 1969 an accelerator/clutch confusion enabled Mrs Beatrice Park to drive into the River Wrey at Guildford during her fifth test.  She and her examiner climbed onto the roof and waited to be rescued.  The examiner was later sent home in a state of shock, still clutching his clipboard.  When Mrs Park asked if she had passed her test, she was told:  "We cannot say until we have seen the examiner's report.")

The highest number of convicts ever to escape simultaneously from a maximum security prison is 124.  This record is held by Alcoente Prison, near Lisbon in Portugal.

During the weeks leading up to the escape in July 1978 the prison warders had noticed that attendances had fallen at film shows which included 'The Great Escape', and also that 220 knives and a huge quantity of electric cable had disappeared.  A guard explained, "Yes, we were planning to look for them, but never got around to it."  The warders had not, however, noticed the gaping holes in the wall because they were "covered with posters".  Nor did they detect any of the spades, chisels, water hoses and electric drills amassed by the inmates in large quantities.  The night before the breakout one guard had noticed that of the 36 prisoners in his block, only 13 were present.  He said this was "normal" because inmates sometimes missed roll-call or hid, but usually came back the next morning.

"We only found out about the escape at 6.30 the next morning when one of the prisoners told us," a warder said later.  The searchlights were described as "our worst enemy" because they had been directed at the warders' faces, dazzled them and made it impossible to see anything around the prison walls.  When they eventually checked, the prison guards found that exactly half the jail's population was missing.  By way of explanation the Justice Minister, Dr Santos Pais, claimed that the escape was "normal" and part of the "legitimate desire of the prisoner to regain his liberty."


There are plenty more stories in the books.  They're a lot of fun.

Sigh... those must be some interesting books...

I especially got a good laugh out of the cow story. If you like these sorts of stories, you'd like the series of "Uncle John's Bathroom Readers" which have the same sort of funny stories in them along with other bits of trivia, most of which are interesting and/or amusing.

Regarding the cow story, here’s the response from a vet I sent that vignette to:

I have heard variations of the story many times. Unfortunately, it is a common mistake. Lighting a match to demonstrate the escaping gas from the trochar in a bloated animal is a very attractive thing to do. It’s dramatic and often facilitates a more rapid exodus of the gas . A local (now retired vet) in town here, did the same with a bloated mule. Mule took off and ran through a barn, filled with old hay. Barn burned to the ground. Fortunately, the farmer after looking quite shocked at first, said “Wow doc, we were going to have to pay to get that old barn bulldozed. Looks like you and the mule took care of that today too.”
Yep, ol Dr Smith said that when the barn first caught, he knew that there was no saving it. They were way in the country and it would go fast. The problem was his insurance carrier was his brother-in-law. Explaining how this happened to him and his wife. Well, that was going to be the most humorous part.

Tom, was that "Rocket Mule" I heard in the background?