If you were wondering why ... the riots of the past few days should explain them all ... I saw this coming.  So did many people who are alert to the "signs of the times".

The bottom line in this whole mess is that when it comes to personal security during a riot, we're on our own.

You can't defend yourself, or your family, or your home, or your small business, with kind words and a cup of coffee.  You need the right tools to do so, particularly in the face of hate-filled rioters who want nothing more or less than anarchy and destruction.  To stop them, you need a weapon - and not just any weapon, either.  It may have to cope with multiple attackers, advancing fast, some of them also armed.

Let me state flatly, once and for all, that every adult American needs to be ready, willing, able, and equipped to defend themselves against this onslaught on our society.  Such defenses need to include firearms, training in their use, and sufficient ammunition to get the job done.  If you don't have all of those, it's long gone time that you remedied the position.  Don't delay, and don't say you can't afford to do that.  You can't afford NOT to do it.


There's much more at the link.  If you haven't already seen that article, I urge you to read it in full.

Events since then in many US cities have merely underscored what I have to say - and the general public is waking up fast.  Recent headlines bear that out.  For example:
Note that violence came to these people where they were.  They didn't go looking for trouble:  trouble found them.

In this day and age, you can no longer rely on being innocent and/or apolitical and/or uninvolved to protect you and your loved ones.  You'd better be able to protect yourself, and them, because the cops won't show up until at least several minutes after you call them.  In the intervening period, you're on your own - and the mob won't care whether you're innocent or guilty.  They'll just steamroller you.  That's the nature of mobs.

Many Americans are now trying to equip themselves to defend against this new criminal reality.
Sadly, they've left it very late . . . for some, too late.  Many gun shops have been cleaned out, and are reporting little or no stock of weapons suitable for defense.  I'm told some may actually go out of business, because they can't get in enough guns, quickly enough, to keep their monthly cash flow at a survivable level.  Their distributors and wholesalers have been cleaned out, too.  (A nearby dealer that I use, Texas Knifeworks & Guns, is a fortunate exception:  they've been in business long enough, and the owner is canny enough, that they've managed to keep a supply coming in.  If you can't find anything locally, contact them and see about having a gun shipped to you.  Tell them I sent you.  Their prices are still reasonable, too.  No, they're not compensating me for recommending them - I'm simply trying to help my readers, and a dealer who's helped my wife and I from time to time.)

As for ammunition, I've never before heard of national dealers like Brownells being sold out of every single type of ammunition in certain calibers and cartridges, but it's happened now.  This was part of their 9mm ammo page this morning: 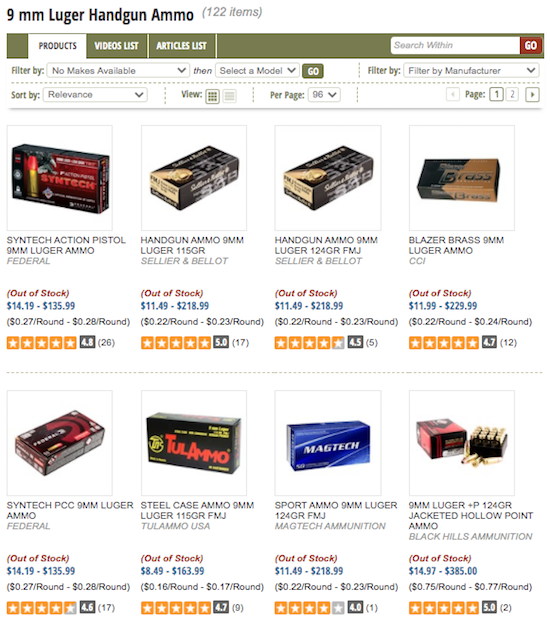 Everything, without exception, out of 122 options they list for that round, was out of stock.  Everything.  Even my favorite online ammo dealer, one of the biggest in the country, where I've been a regular customer for literally decades, had precisely 3 (yes, three!) types of 9mm defensive ammo available this morning - and those were less popular varieties, too.  They usually have dozens or scores of options.  I can only say, I'm glad I've got mine . . .

Folks, if you haven't yet got a gun, you're going to have to scramble to find one.  You may not be able to get the make or model you want, or find it in your preferred caliber or cartridge - but I respectfully submit that if you didn't take care of your needs earlier, you no longer have a choice.  In too many places in America right now it's a matter of have a gun, or be a victim.  It's as simple as that.  That applies whether you're at work, or driving somewhere, or at home, or shopping, or whatever.  You don't know when trouble may arrive, so you'd better be prepared for it - or take the consequences.

Oh - just in case you were wondering, ignore all the mainstream media scare-mongering about the "boogaloo".  Yes, there are extremist idiots who are trying to whip up emotions against the rioters and protests, and proclaiming that it's "boogaloo time" - whatever that means.  You may as well say it's flapjack time, or chicken-and-dumplings time, or whatever else takes your fancy.  That's just the buzzword of the moment, and it'll be supplanted by another buzzword in due course.  A while back, the same people had adopted a phrase from comedian Sacha Baron Cohen and were proclaiming that "Spicy time is coming".  The reality of mob violence is neither spicy nor boogaloo.  It's just flat criminal, and needs to be dealt with as such if we're unfortunate enough to encounter it.

I've got several firearms surplus to requirements, that I'll be selling at a local gun show next month:  AR-15's, defensive shotguns and a couple of lever-action carbines, plus a few handguns.  Since my income's been severely impacted by my health situation since my heart attack last year, I may as well make up for that as best I can, so the higher prices now prevailing for used guns will be a blessing to me, at least.  I'll have to dig out some more ammunition to sell, too.  I don't have a lot to spare, but I can at least provide some with each gun, so that those who buy them can use them if they have to.  Towards the end of this month, as the gun show draws nearer and I've cleaned and sorted out what I'm selling, I'll let readers know what I've got, and give you first crack at them in these pages, as I've done in the past.  All legal requirements and restrictions will apply, of course.

I did not know about the lady being dragged from the car.

And the mayor then lies and says it did not happen.

The above is from several sources. It’s frustrating the gas lighting being done of “mostly peaceful”.

It's a great pity that the overwhelming majority of these newly-acquired weapons will disappear into the bottom drawer of the dresser, under the blankets. If I saw a corresponding uptick in range use, I'd feel a lot better.
.

I checked SG Ammo today, and like you said, 5.56 is cleaned out. They did have some 6.8 soI did what was needed.

Just curious does one of the handguns that you are looking to sell happen to be a Glock 19 gen 3? If so I would be interested in it.

If I had an AR id have a alternate flavor upper for some
other round like .22LR.

Took your advice about the Rami, if you want to sell one of those I'm your man. Two is one, one is none. I'll even drive up from Houston to meet you, seeing as I've never met a successful writer before.

Sorry Peter, but I must disagree about "get a gun."

You should have said, "get some guns----pistol(s), rifle(s), shotgun(s) not necessarily in that order.

Next, get some Ammo. No, actually, get even more ammo.

Next, get some training, then get some practice.

Two questions from a newbie.

How much ammo is a reasonable amount of ammo per weapon?

Is Full Metal Jacket ammo only good for practice?

@George: Try these three articles, in the order listed.

In general, for defensive purposes, look for hollow-point or soft-point ammunition, because it tends to stay in the body of the target better than non-expanding ammunition, transferring more energy and not over-penetrating to pose a danger to other innocent parties nearby.

I just looked at Palmetto State Armory, probably the largest purveyor of budget level ARs in the country.

And PSA doesn't have a whole lot of kits in stock.

The scariest one to me was the woman in the car. It looked like a scene from World War Z when she was tackled and swarmed. No way to defend yourself from that other than not putting yourself in the situation to begin with. Clearly she thought that getting out to talk to those blocking the streets was a rational action. Clearly she was wrong.