In almost every war, it's up to military engineers and combat engineers in some shape or form to prepare, optimize, and later repair the actual field of battle.  From making roads and building fortifications, to carving ramps from a beach to inland objectives, to preparing rough-and-ready airstrips for aircraft to land with supplies and evacuate wounded, and in many other ways, military and combat engineers are absolutely essential.  Some engineer units have become modern legends, for example:

However, engineers aren't a recent development.  They've been elements of armies almost from the dawn of history. Their task has seldom been easy, particularly before the advent of the Industrial Revolution brought with it tools that simplified their tasks:  but few can have faced a challenge so great as the bridging of the Dardanelles between Asia and Europe, to allow the passage of an invading army.  That's the job King Xerxes I of Persia gave his combat engineers in 480-479 BC.

Ancient Greek historian Herodotus, who lived during that period, recorded what happened.  He's a seminal figure in our understanding of history, as Wikipedia notes.

He is known for having written the book The Histories, a detailed record of his "inquiry" on the origins of the Greco-Persian Wars. 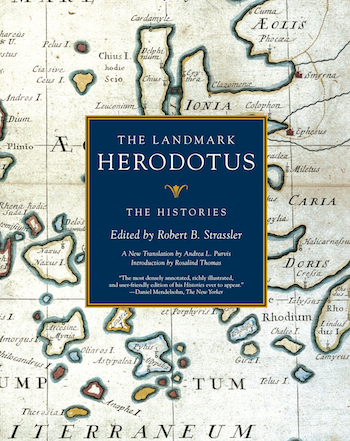 He is widely considered to have been the first writer to have treated historical subjects using a method of systematic investigation—specifically, by collecting his materials and then critically arranging them into an historiographic narrative. On account of this, he is often referred to as "The Father of History," a title first conferred on him by the first-century BC Roman orator Cicero.


Here's how Herodotus described the bridging of what was then known as the Hellespont.

[7.33] Xerxes, after this, made preparations to advance to Abydos, where the bridge across the Hellespont from Asia to Europe was lately finished. Midway between Sestos and Madytus in the Hellespontine Chersonese, and right over against Abydos, there is a rocky tongue of land which runs out for some distance into the sea. This is the place where no long time afterwards the Greeks under Xanthippus, the son of Ariphron, took Artayctes the Persian, who was at that time governor of Sestos, and nailed him living to a plank. He was the Artayctes who brought women into the temple of Protesilaus at Elaeus, and there was guilty of most unholy deeds.

[7.34] Towards this tongue of land then, the men to whom the business was assigned carried out a double bridge from Abydos; and while the Phoenicians constructed one line with cables of white flax, the Egyptians in the other used ropes made of papyrus. Now it is seven furlongs across from Abydos to the opposite coast. When, therefore, the channel had been bridged successfully, it happened that a great storm arising broke the whole work to pieces, and destroyed all that had been done.

[7.35] So when Xerxes heard of it he was full of wrath, and straightway gave orders that the Hellespont should receive three hundred lashes, and that a pair of fetters should be cast into it. Nay, I have even heard it said that he bade the branders take their irons and therewith brand the Hellespont. It is certain that he commanded those who scourged the waters to utter, as they lashed them, these barbarian and wicked words: "Thou bitter water, thy lord lays on thee this punishment because thou hast wronged him without a cause, having suffered no evil at his hands. Verily King Xerxes will cross thee, whether thou wilt or no. Well dost thou deserve that no man should honour thee with sacrifice; for thou art of a truth a treacherous and unsavoury river." While the sea was thus punished by his orders, he likewise commanded that the overseers of the work should lose their heads.

[7.36] Then they, whose business it was, executed the unpleasing task laid upon them; and other master-builders were set over the work, who accomplished it in the way which I will now describe.

They joined together triremes and penteconters, 360 to support the bridge on the side of the Euxine Sea, and 314 to sustain the other; and these they placed at right angles to the sea, and in the direction of the current of the Hellespont, relieving by these means the tension of the shore cables. Having joined the vessels, they moored them with anchors of unusual size, that the vessels of the bridge towards the Euxine might resist the winds which blow from within the straits, and that those of the more western bridge facing the Egean might withstand the winds which set in from the south and from the south-east. A gap was left in the penteconters in no fewer than three places, to afford a passage for such light craft as chose to enter or leave the Euxine. When all this was done, they made the cables taut from the shore by the help of wooden capstans. This time, moreover, instead of using the two materials separately, they assigned to each bridge six cables, two of which were of white flax, while four were of papyrus. Both cables were of the same size and quality; but the flaxen were the heavier, weighing not less than a talent the cubit. When the bridge across the channel was thus complete, trunks of trees were sawn into planks, which were out to the width of the bridge, and these were laid side by side upon the tightened cables, and then fastened on the top. This done, brushwood was brought, and arranged upon the planks, after which earth was heaped upon the brushwood, and the whole trodden down into a solid mass. Lastly a bulwark was set up on either side of this causeway, of such a height as to prevent the sumpter-beasts and the horses from seeing over it and taking fright at the water.

[7.37] And now when all was prepared - the bridges, and the works at Athos, the breakwaters about the mouths of the cutting, which were made to hinder the surf from blocking up the entrances, and the cutting itself; and when the news came to Xerxes that this last was completely finished - then at length the host, having first wintered at Sardis, began its march towards Abydos, fully equipped, on the first approach of spring.

[7.54] All that day the preparations for the passage continued; and on the morrow they burnt all kinds of spices upon the bridges, and strewed the way with myrtle boughs, while they waited anxiously for the sun, which they hoped to see as he rose. And now the sun appeared; and Xerxes took a golden goblet and poured from it a libation into the sea, praying the while with his face turned to the sun "that no misfortune might befall him such as to hinder his conquest of Europe, until he had penetrated to its uttermost boundaries." After he had prayed, he cast the golden cup into the Hellespont, and with it a golden bowl, and a Persian sword of the kind which they call acinaces. I cannot say for certain whether it was as an offering to the sun-god that he threw these things into the deep, or whether he had repented of having scourged the Hellespont, and thought by his gifts to make amends to the sea for what he had done.

[7.55] When, however, his offerings were made, the army began to cross; and the foot-soldiers, with the horsemen, passed over by one of the bridges - that (namely) which lay towards the Euxine - while the sumpter-beasts and the camp-followers passed by the other, which looked on the Egean. Foremost went the Ten Thousand Persians, all wearing garlands upon their heads; and after them a mixed multitude of many nations. These crossed upon the first day.

On the next day the horsemen began the passage; and with them went the soldiers who carried their spears with the point downwards, garlanded, like the Ten Thousand; - then came the sacred horses and the sacred chariot; next Xerxes with his lancers and the thousand horse; then the rest of the army. At the same time the ships sailed over to the opposite shore. According, however, to another account which I have heard, the king crossed the last.

[7.56] As soon as Xerxes had reached the European side, he stood to contemplate his army as they crossed under the lash. And the crossing continued during seven days and seven nights, without rest or pause.

I bet the second lot of engineers, having heard of (and perhaps watched) the beheading of their predecessors, applied their minds to the bridging problem with great concentration!

I remembered watching "Masada" and other movies and seeing the details the movies would go through to show how they did the siege engineering for the battlefield and they didn't use CGI, it was "real" they made it on set so it was fascinating to see. A real good siege engineer was worth their weight in gold to someone trying to attack a fortified city.

Fascinating, and having seen that area, even more unbelievable!

Another feat from antiquity which amazes me is the bridging of the Rhine by the Romans. If I remember, the current was horrid, and the bridge was not put up in the best time of the year. My hat is off to those engineers. What the Sea Bees did with their airfields was pretty cool, too. . .

and history teaches us: recall the Bailey Bridge of WWII era.
Smaller, but much the same principle.