As if we needed any more evidence of how the mainstream news media is misreporting the COVID-19 pandemic, PJ Media uncovers how they're deliberately not reporting data in an accurate, transparent, unambiguous way - so much so as to amount to de facto falsification.

Without fail, the media seems intent on making America out to be the lone failure in the world in the battle against the coronavirus ... when you look at the number of cases or the number [of] deaths individually and compare them to other countries, the USA seems be the hardest hit…

…that is until you account for population or look at the ratio of deaths per confirmed cases. I’ve previously examined how the United States measures up on cases and deaths per capita, so we know why the media doesn’t report on that, but the media the media also doesn’t want to report about case fatality rate (CFR). And the following graphs will show you why.

I decided to look at the case fatality rate of the United States and compare it to select European countries. We often hear about how enlightened Europe is compared to the United States, with their progressive politics and various version of universal health care. So, let’s see how they measure up (click to enlarge graph): 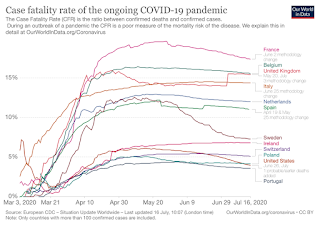 How about that! Out of the twelve countries compared here, the United States currently comes in at the bottom, ranking at number eleven.

And before anyone suggests that my selection of countries was biased, let’s compare the United States to the entire European Union, and for kicks let’s add Canada into the mix: 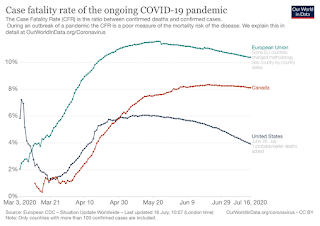 Keep in mind that New York City is the hotspot of the entire world, not just the United States. Had the failure of local leadership by Governor Andrew Cuomo and Mayor Bill de Blasio not occurred, the United States would have come out even better when compared to the rest of the world.

The CFR in the United States is currently just under 4 percent, but that doesn’t mean nearly 4 percent of the people infected by COVID-19 will die. According to the CDC, the overall mortality rate for symptomatic cases of COVID-19 is likely .4 percent.

Back in March, I noted how the media was avoiding cases and deaths data per capita because that showed that the United States was doing better than other comparable countries. That data didn’t show the United States as number one for deaths or cases. The media wants us to believe the United States is disproportionately losing the battle against COVID-19 compared to other nations because they want the public to blame Trump and vote him out of office.

I think we now understand why President Trump has just taken COVID-19 reporting away from the CDC and assigned it to the Department of Health and Human Services.  (Note the NYT's scaremongering in the linked report.  I'm sure they're concerned - because the news media will no longer be able to manipulate the data as easily and as selectively as in the past.)

I think by now it's very clear to any unbiased observer that US news media are determined to report anything concerning the COVID-19 pandemic in the most biased, alarmist, scaremongering way they can think of.  So much for honesty in reporting.  So much for "all the news that's fit to print", because they're printing stuff that's fit only for the garbage heap, not the front page.

Adding this to all their other many biased reports over the past few years, how will the news media ever regain the trust of the public?  I honestly don't know.  I'll certainly remember this (and their many, many other misdeeds) every time I look at them - and I'll never trust their impartiality or accuracy again.  I hope all Americans will do likewise.

...how will the news media ever regain the trust of the public?

To ask the question is to answer it. ;-)

Propaganda or the Big Lie works because the number of folks that use logical thinking and actually look at the facts instead of the Bobblehead parting the propaganda is very small compared to the bulk of people.

Thus even though the Media is a known liers, even though Used Car Dealers and even New Car dealers are liers and thieves enough folks keep accepting that their words must be true...

Well, we KNOW that the media hates, Hates, HATES Mr. Trump, and most of the citizens of the U.S. And it LIES to us.

My answer to Borepatch is NEVER. Admittedly, that's so obvious.

The media is truly the enemy. Let's all make them have a bad day, with extreme prejudice.

The news media has never been any other way.

Here's quote. Do you know who it is and when he said it?

"You have heretofore read public sentiment in your newspapers, that live by falsehood and excitement; and the quicker you seek for truth in other quarters, the better."

You should be very suspicious of anyone who quotes one, specific piece of data in order to make a particular point. This example of Case Fatality Rate (CFR) is an example. It's one measure, and it does provide one indicator of the efficacy of treatment. But it also fails to take into account a number of other factors.
The article in in PJ Media has ignored a number of other metrics. Firstly, you reduce the number of potential deaths by limiting the number of infections in the first place. By way of example, your northern neighbours, Canada have an infection rate less than one third that of the USA (2,901 per million of population vs 11,332). As a result, Canada's death rate is also much lower (234 per million of population vs 428 in the USA).
Across the world, the USA has the 9th worst death rate per million population. That is, there are 204 countries doing better. In respect of the infection rate it has the 12th worst infection rate (202 countries are doing better).
So, whilst the CFR figures shows that once someone gets sick in the USA they generally receive excellent care in your medical facilities, they don't show that amongst the vast majority of countries in the world you're more likely to die from Covid-19 in the USA.
That is a clear failure of public policy.

Already asked and answered. Four states account for nearly half of the US's COVID deaths--NY, NJ, CT, and MA. If one removes those four from the ledger, the US's deaths per million rate drops to close to Canada's.

@Tom I don't think you're correct. I count 24 states with a death rate per million population higher than that of Canada.
Given the 4 states you listed states are still part of the USA, simply removing their totals from the ledger is not only irrelevant to the overall measure of performance, it's a statistical lie.

If the CFR is running at 4% (FTR, our own pre-pandemic guesstimate, based on coronavirus avg. CFR, was 3%) THERE'S NO WAY IN #€££ the CFR for symptomatic COVID cases could ever be 0.4%!! It's mathematically impossible.

When you crack that hurdle, give a holler to the Nobel Prize Committee in Oslo, and have your tux pressed while you wait for your telegram.

Those four states have 11.7% of the US population and 42% of the COVID deaths.
The point of that is that the main public policy failure is on the part of NY, NJ, CT, and MA, not the United States as a whole.

Also, by my count, there are 29 states with a deaths per million rate lower than Canada's.

I forgot to mention that I despise, detest, and distrust the NYT (and its little dog WaPoo, too!) and the rest of the media.

Regardless of the specific topic, I still get people who cite the New York Times-Traitor, Washington Post-Fabricator, Communist News Network, National Progressive Radio as though it's gospel. And when I counter with disbelief are aghast and horrified that I might not be genuflecting to The Authority.