I think there needs to be a very thorough investigation into why so many in the medical establishment - not to mention the Democratic Party and their mainstream media allies - were so virulently opposed to the use of hydroxychloroquine to treat the COVID-19 virus.

Report after report disparaged it, denigrated it, and said it wasn't useful or needed - frequently without conducting any detailed study of the medication's effects.  However, a new study paints a very different picture.

Officials with the Michigan health system said the study found the drug “significantly” decreased the death rate of patients involved in the analysis.

The study analyzed 2,541 patients hospitalized among the system’s six hospitals between March 10 and May 2 and found 13% of those treated with hydroxychloroquine died while 26% of those who did not receive the drug died.

It appears that opposition to the use of hydroxychloroquine was, in many cases, predicated on the fact that President Trump supported its use.  Anything he recommended had to be opposed, no matter what!  The fact that this may have killed thousands of people who were denied access to the drug clearly didn't bother his opponents.

As Dr. David Samadi points out (click the first screen capture to go to the original Twitter thread): 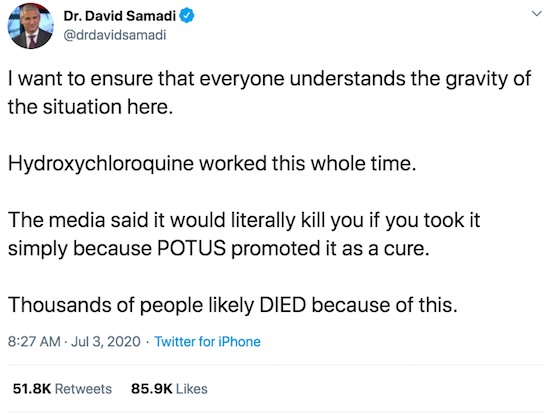 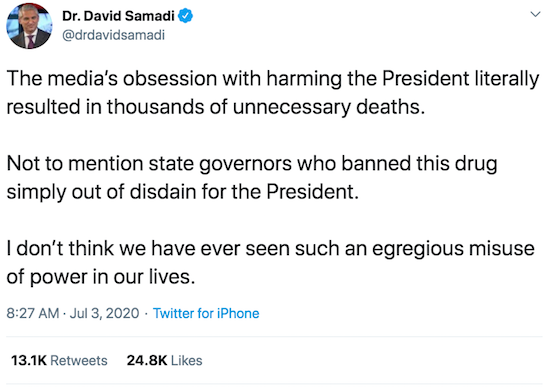 I think Dr. Samadi has a point . . . but I doubt whether anyone will ever be held accountable for it.  After all, it's only the "little people", the "deplorables", who died - and they don't count.

But nothing will be done, nor will anyone be held accountable...

Last I checked Drumpf is not a doctor or even scientist.
My comment further is if he jumps off a bridge will you?

The big item not reported is of those that got Chloroquine
the death rate increased. Seems the side effects that are
well known from the drug were a factor.

However those that believe that is untrue then of course
you as a proxy tell the doctor he must use it.

Since then Remsidir, and Dexamethasone have both proven far
more effective and lower undesired side effects.

As the old story goes no for the rest of the story.

Every study can produce a different result but there
are more studies say not a good treatment. Need I
remind you that Warferin aka rat poision in carefully
controlled doses is proven to prevent strokes due to
cardiac clots in patients with afib.

Yeah, even the Lancet had to retract a large study on hydroxichloriquine which allegedly indicated that it caused more deaths. My doctor was particularly mad over that fiasco.

I understand that Remdesivir costs three grand vs ten bucks for HCQ. Not that that would any difference to politicians, Big Pharma or Trump haters.

@Eck!: I can see where you're coming from. However, the issue in this case is the concerted denial by the "establishment" that HCQ can and does work. Its side effects are dangerous to cardiac patients, and to those with as-yet-unknown cardiac problems, yes. I took HCQ for years in Africa as a malaria prophylactic, and it worked well for me. Now, after two heart attacks, I'd be a damned fool to take it again, and I know it! However, for those without such issues, it's not dangerous, and it appears (in the light of slower, more deliberate, larger-scale studies) to perform as advertised. It's the denial of that truth that worries me.

Eck, HCQ is an exceptionally well known drug and for COVID it would be applied in a hospital setting where you are under direct medical supervision.

The test was done without zinc, which supposedly increases its effectiveness.

Question for your MD-how easy is it to set up a study
that shows failure of treatment X?