The extremists behind the riots in many of our cities are now escalating matters.  They haven't succeeded so far in taking control of the streets, so they're using more powerful weapons.

Seattle PD confiscated a van earlier this week that proved to be filled with improvised stop strips, large fireworks bundled together to form improvised explosive devices, and other munitions.  One example from the many photographs taken of the van's contents: 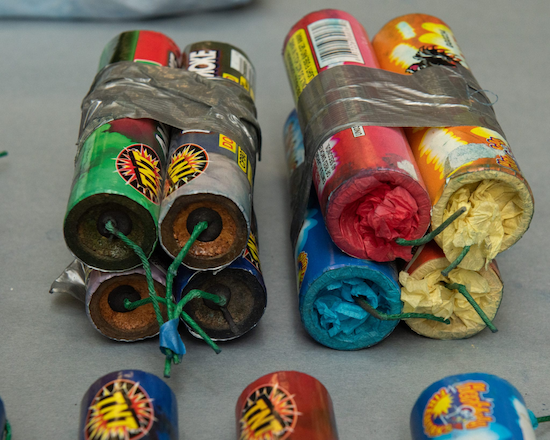 Yes, bundles of large fireworks like that are highly explosive.  It's accurate to describe them as IED's, in the same sense as those our armed forces have encountered in Iraq or Afghanistan.  Hold one when it explodes and you're likely to lose your hand.  If one goes off next to a policeman, serious injury is not unlikely.

In Atlanta, extremists went even further.

Images of the modified fireworks show multiple large nails embedded in the devices.

Harden your homes against attack by Molotov cocktails, or bricks followed by commercial-grade fireworks used as explosive/incendiary devices. If your home is attacked in the front by a mob, you will want to plan an egress route that does not use your front door, that will enable your family to move to safety and enable you to move unseen to a flanking position where you can engage the ABR terrorists. And yes, attacking people at home with the intention of burning them out or terrorizing them in the middle of the night is pure definitional terrorism. Plan accordingly.


So what are the rules of engagement in this new urban reality?  Another blogger takes a hard line.

What are the rules of engagement? Some might say shoot first and ask questions later. Then get out of Dodge and don’t stop for a flashing light, or anybody with a badge. The kid gloves have to come off eventually.

Avoid large population centers if at all possible. Bear arms. Travel with people you trust to have your back. Take careful note of your surroundings at all times. Position yourself according to potential threats. If you can escape a dangerous encounter without exposing yourself or loved ones to greater risk by retreating, do it. However, there comes a point in a confrontation when everybody involved knows that violence is inevitable. If you reach such a point, don’t hesitate and don’t execute half-assed measures.

Those of us not living in the midst of urban terrorism like that aren't (yet) at the "point of no return".  We don't (yet) have to face that reality.  However, if you live in Portland, or Seattle, or Atlanta . . . you do.  Consider your options, and choose wisely.

We may be facing a return to the years of urban terrorism in America in the 1970's.

It may be hard to recall now, but there was a time when most Americans were decidedly more blasé about bombing attacks. This was during the 1970s, when protest bombings in America were commonplace, especially in hard-hit cities like New York, Chicago and San Francisco. Nearly a dozen radical underground groups, dimly remembered outfits such as the Weather Underground, the New World Liberation Front and the Symbionese Liberation Army, set off hundreds of bombs during that tumultuous decade—so many, in fact, that many people all but accepted them as a part of daily life. As one woman sniffed to a New York Post reporter after an attack by a Puerto Rican independence group in 1977: “Oh, another bombing? Who is it this time?’ ”


I hope and pray we're not regressing to that . . . but the signs don't look very encouraging right now.  Certainly, if the extremists have their way, we will.

I believe those are smoke bombs, bundled because they are only fair at making smoke.

On further thought the fusing all but guaranties uneven ignition which is OK for smoke but not explosives. In my youth we learned how to get simultaneous ignition of model rocket engines with proper electric fusing. It's not all that easy. That reminds me, rocket engines will explode if they were roughly handled, putting cracks in the solid propellant. It happened to us once. There are reasons model rocketeers use remote ignition. I suppose a large engine, hit with a hammer then coated with BBs would make a nasty improvised device usable with cannon fuse. Wonderful, now I'll be keeping myself up at night.

An interesting review of "Days of Rage," which covers the domestic terrorism of the 70s, is here:

I fear we are seeing similar things now, especially with the support by elites of movements they themselves won't feel the consequences of.

I have learned from experience gained in Rhodesia and later in the Far East, that the only way to respond to a direct threat to one's self and/or family is the maximum amount of violence that you can bring to bear IMMEDIATELY. There's no time for any escalation. You have to show the opposition that you have 'claws that scratch and teeth that bite'. Hit and hit as hard as you can for as long as it takes for the threat to dissipate.
Now re-load, repair any damage and wait for the next wave. Then is the time detonate the half-filled cans of petrol concealed along the line of approach. You need to have a goodly amount of vapour to have a decent 'bang' which spreads the flaming petrol.

Those items in the pictures are homemade grenades.
Several of those cylinders brag "TNT" in bright print. They are most probably not that, but
it claims they are explosives. The fusing is really immaterial as sympathetic detonation
with them tied tightly together is almost guaranteed. They might be as effective (not very) as some of the North Vietnamese grenades that were crudely made with Picric Acid.
(Old 12B30)

TNT is a major brand of fireworks.

There is a guaranteed way to stop this:
molded Pb

Wondering why they want to ban our guns? How do you defend yourself against that without firearms?

"God made men, but Sam Colt made them equal."