As I get older, my hands and wrists aren't what they used to be.  Loading lots of rounds into multiple magazines gets old quickly, even using stripper clips, because of the repetitive motions necessary and the force needing to be exerted.  Literally, it's a pain.

Last year I started looking for some sort of automated solution.  I haven't found one that'll work for all magazines across the range of what I need, but I did find one very ingenious product from Butler Creek:  their ASAP Electronic Magazine Loader for the AR-15 rifle.  It's available exclusively from Midway USA. 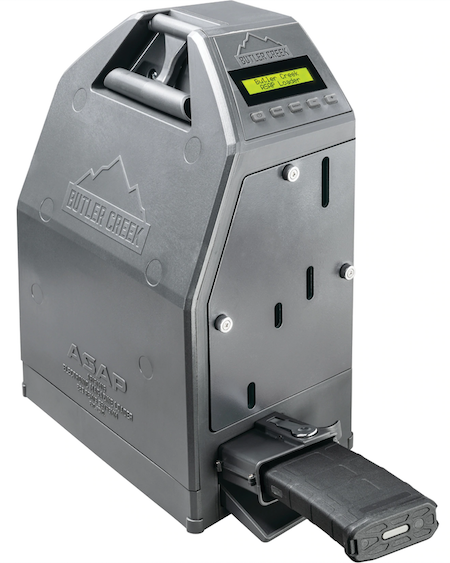 When I bought it, late last year, the cost was $119.99.  However, when I checked yesterday evening, the price had jumped to $249.99 - more than double what I paid!  That probably makes it too expensive for individuals, although shooting ranges and firearms instruction schools may still be able to cost-justify it.  Since I sometimes go shooting with friends, and we may go through a lot of magazines in a day (think Blogorado), it's a useful tool for me.  Its ability to operate with batteries, as well as an AC adapter, makes it more versatile for field use.

Price aside, it works pretty well.  I had several false starts when I began to use it, as the internal belt system simply didn't want to behave itself.  I began to wonder if I'd need to send it back to Butler Creek for repair.  However, after about fifteen minutes' fiddling with it, clearing jams and resetting the machine, it began to work as promised.  It still hangs up from time to time - I'd say every third magazine or so I have to wait for it to clear itself, or do that manually if it's a bad jam - but in general it's a great time-saver.  For training, I load 25 rounds in a 30-round magazine, and it'll do that in about a minute.

Here's a Butler Creek advertising video showing it in operation.

That's pretty much all there is to it.  One adds more cartridges to the hopper, inserts fresh magazines in the well, and pushes a button.  The machine does the rest.  I reckon one person could load 100 magazines in less than 2 hours, with no real strain on fingers, hands or wrists.

I also found the machine a valuable magazine tester.  I have a large supply of old military steel and aluminum magazines, the so-called STANAG mags.  I've rebuilt them by throwing away all the internals and substituting a Magpul anti-tilt follower and a new spring and floor plate.  If the mag feed lips and body are in good condition, that makes it almost as good as new, apart from external scratches and discolorations.  However, a few still give trouble.  I'd marked a few like that to be thrown away, and decided on a whim to see how the ASAP handled them.  Sure enough, it jammed whenever it tried to load one of them.  Somehow, errors in feeding from those mags also caused errors in machine-loading them.  That's a worthwhile additional check on magazine health, IMHO, and one that I'll use in future.

I'm not sure whether the ASAP is still available.  Midway USA advises that it's on back order, but they'll accept your order for when it becomes available.  However, Butler Creek's Web site shows it as discontinued.  I hope that's not the case, because it's a truly useful product if you load a lot of AR-15 magazines.  Sadly, if the demand wasn't sufficiently high, I suppose Butler Creek can't be expected to keep on making it for the few who want it.

Meanwhile, if you can find one (particularly at the old price), it's worth considering.  I won't use mine all that often, but when I need it, it'll save me a lot of time, trouble and pain.

Peter, for a cheaper solution, I find the maglula products work great for me. Pistol and rifle, load / unload.

Then again, I don't go through a case at a time. That looks like fun.

One could always sit and load them slowly by hand while watching TV or Youtube. Much less strain on the hands and wrists.

A failure rate of one out of three successful loadings is not a good endorsement. How much time to fix the thing after each jam? I think the MagLula people have the most practical solution to save the fingers.

I have seen, used and sold many Butler Creek products. I can't think of any except the scope covers that works worth a dime. Jamming every third mag isn't even Chrysler reliability, much less Toyota.

Like those above I heartily endorse the Maglula products. They work and work well.

There is a guy that regularly shows up at the local gun shows that is selling a wooden board with a curved slot milled in it and on one end is a place for the magazine to lay. You line up your ammo in the curved slot, place your mag in it's spot, and then push a lever on the opposite side from the mag that is a slider that feeds all the rounds into the magazine. Easier than stripper clips, but the same basic principle.

As for pistol magazines, there is no better product than the Maglula UpLULA. I was never a fan of mag loaders until I picked up one of them. I cannot recommend them strongly enough!

Folks, I agree that a one-mag-in-three problem rate isn't stellar. However, I suggest you're missing the point. I did emphasize that as I grow older, I find it harder to get my fingers, hands and wrists to cooperate in loading magazines. That includes MagLULA and other devices. I own them, and I like them, but they still cause me pain after a few magazines. The ASAP, being fully automated, takes away that problem, and therefore, even with its faults, it's worth it for me.

If you don't have health issues that make loading magazines (literally) a pain, then you can ignore the ASAP. However, for some of us, it has its place. I think that for gun ranges, training establishments, etc., it can also be useful. You can have a non-gunny type reloading magazines while the instructors and shooters are working on the range. That's potentially useful.

I thought everyone used what I call stripper clips. The ammo just slides into the magazine from them.

Peter - Sorry to hear that your hands are that sore. Save them for typing please! Getting old would be better if it weren't for all the aches and pains.

Chip - you may be surprised to learn that most ammo does not come preloaded on stripper clips.

Can I recommend a reliable option that works excellently especially for people like me who are deaf on one side.

It’s called a “Wife”, you just hand her the components and put a crappy period drama on the TV.

The reloader works really well but can get noisy after a few hours so always sit with the wife on YOUR DEAF SIDE.

Wives are expensive but give years of excellent service if maintained properly. Probably the best multi functional device in service today.

So until Dogs develop thumbs get a wife.

And therein lies the problem of life. About the time you have the time and money to do something, your body is failing you in ways that make it unfun to do the something.

I know people who've scrimped and saved for years to travel, and are now too broken in the body to stand up to the pains of travelling, even in an RV. Especially in places where the roads are horrid. Like California...

Our noble host has found a solution, with a backup. An auto loader, even a crappy one (which, from what you all say, is what that model is) is still better than no loader at all. And he has the manual ones.

Back in the day, the manual loaders used to be called children. But these days, having your kids or grandkids involved? Nyet, Comrade. The less your family knows about your Anti-Government ways, the better. And I wish I could say I'm joking about that. But I'm not. Darned it. Hate these fallen times.

Peter, Sir. Can you tell us what you actually did to make the thing work correctly? Cleaning, lubing, tightening? Is it like the old Harbor Freight tools that were halfway decent to great, once you tore them down and assembled and lubed them correctly? Or is it a matter of just waiting for the failure?

I like the fact that the machine will 'tell' you about bad feed lips and such. That is an important thing to know and isn't readily apparent except by trial and error.

@Beans: I think it needed a break-in period, more than anything. I just loaded 14 magazines with 25 rounds of M855 apiece, and didn't have a single stoppage. There were three "hesitations", but the machine cleared them itself without needing me to intervene. That's the best it's done yet, and I hope the improvement continues.

I've learned a few lessons, though.

1. It really doesn't like steel-cased ammo. It's not as smooth-surfaced as brass-cased ammo, and gives more friction, which the mechanism doesn't like.

2. The ammo should be clean. I've had issues with cases that still had traces of lubricant from reloading, and also from some foreign manufacturers who didn't clean the ammo properly between loading and packaging.

3. Don't overload the hopper. When it says "60 rounds", it means it. For my most recent loads, I put 50 rounds in the hopper every second magazine, and loaded them all before I refilled it. There were no malfunctions.

Just a few ideas that may help.

I wish I'd seen them for $200. They were $300 first time I saw them, and waiting for a sale just caused me to watch the price go up and the supply go away

For me, I don't really see the need as loading AR mags is not that big of a deal. I will, however, fight you to the death if you try to take my Uplula pistol magazine loader from me.