That gets it said

The inimitable Kim du Toit has a message for those seeking to lord it over Americans.

The Seditionists Need A Path Back Into Society

…and it’s all about how the Left can make accommodations to learn to live with us, the poor misguided 75 million people who actually voted for Trump in 2020.

Whom she charmingly calls, “Seditionists.”

Now I’m not going to fisk the whole article because I’m trying to keep my breakfast pint of gin to only one per day, but let me just make one observation.  Here’s an example of Applebaum’s towering condescension:

Here’s a tip for The Atlantic  and its writers:

We’re not rejecting our country’s political system.  We’re protesting the fact that our votes were nullified by massive injections of fraudulent ballots in states which would otherwise have gone overwhelmingly for Donald Trump.

Or, put another way:  if our political system — the one that the Left seems to have installed — is now going to systematically allow wholesale criminal alterations of voting preferences by the addition of fraudulent ballots:  then **** yes, we’re going to reject it.

Until such time as you understand this, there will never — never — be any kind of accommodation towards the Left by us conservatives.

What happened at the Capitol wasn’t an “insurrection”, it was a protest.  If you want to see an insurrection — and I promise you, you don’t — just keep squeezing us:  keep calling us names such as “seditionists”, keep preventing us from getting jobs because of our political philosophy, keep talking about “re-educating” or “reprogramming” us and our children into obedience to your foul Marxist doctrine, keep shutting us out of social media, keep muzzling conservative voices, keep trampling all over our First Amendment rights in general, keep trying to infringe our Second Amendment rights, and in short, keep trying to push us out of the American society and polity.

You Marxists think that the protest at the Capitol was the bite of a savage dog (you know, the one that keeps getting teased until it snaps).  It wasn’t a bite — it wasn’t even a nip.

I can't help but laugh out loud at attempts by progressive leftists and their mainstream news media lackeys to portray the Capitol Hill protests of January 6, 2021 as an "insurrection" or "domestic terrorism".  I know both terms intimately, through long and bitter personal experience of what they really mean.  January 6 had about as much to do with either term as I have to do with the sex life of the Polynesian parrot - namely, zip.  Zilch.  Nada.  Nothing.  (And that says nothing about the increasingly proved "false flag" actions of leftist extremists who tried to use the protests to manufacture "evidence" of right wing "domestic terrorism".  Here's the latest example.  Yes, I'd classify him as a wannabe domestic terrorist - but of the left wing, not the right.)

The wokescolds who are trying to bully everybody into compliance with the progressive left-wing agenda, and/or exclude from society everybody who does not or will not conform, had better wise up.  Some Americans are already at the point where their patience has run out.  Others, including myself, are trying very hard to remain peaceful in our approach . . . but such an aggressive, hyper-politicized approach by progressives will beget its own reward.  "As you sow, so shall you reap" remains as true today as it's ever been.

The Biden administration and its hangers-on are not in control of the situation.  They're too radical for almost all conservative and constitutionalist Americans, and not radical enough for their own progressive far-left-wing faction.  They're neither fish nor fowl to the average American.  They may do the bidding of their oligarch masters . . . but those masters are themselves unable to control the entire population, despite their efforts to make the mainstream news media and social media into their lockstep boot-licking propaganda lapdogs.  An increasing proportion of the population are no longer prepared to be told what to think, and no longer willing to "go along to get along".  If you want to know how that ends up, ask past dictatorial leaders like Nicolae and Elena Ceaușescu.  Unfortunately, you'll need a Ouija board to do so. 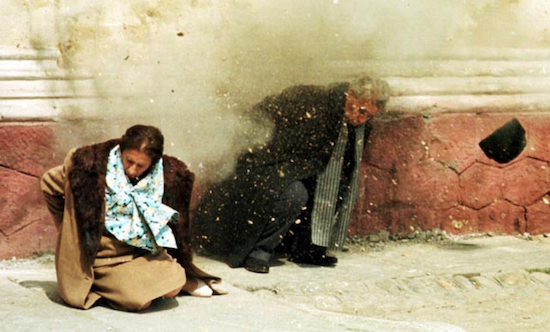 Thanks be to God, the United States is not and has never been that savage in changing its administrations.  However, that does not mean it can never be like that.  Desperation and fury are best not provoked . . . but at present, that's precisely what the progressive left seems to want to do.

The purges are coming to insure that the zampolits and commissars that oversee the population are politically correct within that progressive framework. You can't have a government with patriots in their midst and carry out the full transformation to a post-constitutional government.

Defunding the police as constituted and replacing them with the cadre that they want may be more difficult to pull off than they first imagined.

In the Atlantic author-twit's world, it has been proven there was no election fraud. There was a fight in the comments over at Watts Up With That the other day with some leftist troll insisting every court, up to the Supremes, ruled there was no fraud. No, they didn't. Every court, up to the Supremes refused to get involved - refused to look at the evidence.

It's like Rand Paul's interview with George Snuffleupagus where he tried to argue that same point with Dr. Paul. Dr. Paul corrected him and made him shut up. Maybe it was just to keep the show going, but maybe he'll start to see.

Unless massive changes are made, I'll never trust another national election. The states that cheated worked very hard at cheating because the individuals benefited greatly from the cheat. Simple measures aren't adequate to stop industrial scale cheating.

the chinese don't need slaves...slaves abound in china...we have been sold down the river since Reagan...until DJT came...first there was Ross Perot...then Ron Paul...then the tea party...then DJT...so far the leftists have proven themselves cowards...they now own all the branches of government...they can take your guns...the only thing standing between them and their objective is the courts.

The fundamental thing about the demonstration at the Capitol was that it was out of their control. We've since found plenty of embeds in the crowd that were present at other BLM/Antifa demonstrations and successfully turned those into riots according to their own designs. It looks like that skillset works on all kinds of crowds once they're in a certain type of mood. That particular crowd, however, was generally objecting to the Marxist's designs on the day, and there was nothing the Marxist's could do about it.

So now the National Guard is out continuously in DC at their request. Thirty murders, billions of dollars of damage, arson, battery, whole city centers blasted into unrecoverable rubble, none of that motivated the Marxists to get out the National Guard or have their own police forces actually enforce written law rather than stand down. Why should they? As we have seen proven by this reaction, those riots were convenient and amenable to them. This riot (as it was made so by a small cadre of professionals in the art) wasn't convenient, and that's what's made them concerned about the integrity of their power center. (There's also a certain amount of showmanship involved in cry-bullying about it.)

I will accept the unconditional resignation of the current administration, acknowledgment and lawful installation of the actual election victors, and the literal severed heads on silver platters of every person in every state who instigated the vote fraud in every state where it occurred in November 2020 and January 2021, and the wholesale imprisonment of every media employee who helped promulgate and perpetrate it, as the only acceptable resolution to the current impasse.

That is a just, reasonable, and compassionate alternative to what may happen instead of that.

But if the Leftards cannot and will not compromise at least that far, all further discourse is unproductive, and only for purposes of deception, in the coming cleansing of this land from sea to shining sea, and there will be no prisoners, and no terms but unconditional surrender, followed by hangings in lot batches.

That wanted to play for blood. Fair enough.
They dealt the hand. Well and good.
Now it's time to settle up accounts.
I'm your Huckleberry.

They are about to find out experimentally and experientially what happens when half the country withdraws consent, passively at first, and increasingly, actively. And ultimately, kinetically.

That is exactly the Cauçescu Resolution.
They bought their tickets.
Now they're going to ride that tiger.

It couldn't happen to a nicer or more deserving bunch of unreconstructed communists.
I missed out on getting to do a more active part while serving during the Cold War.
I must say, it was damned decent of them to provide an opportunity to put years of deliberate training to good use, while I yet have the strength and inclination.

"I pity those communist bastards. They have us completely surrounded. Now we can attack in all directions."
- Chesty Puller, USMC
Chosin Reservoir, 1950

I fear the sentence should really read 'Thanks be to God, the United States is not and has never been that savage in changing its administrations SO FAR'.

Peter, out of curiosity - do you own the bayourenaissanceman.com URL? It doesn't link to your blog so I'm guessing not. Might be a good idea to have a backup URL in case of purges.

Minor point, if you're using an Ouija board you're only communicating with demon spirits who will have no hesitation in lying and deceiving. The real Nicolae and Elena Ceaușescu are in Hell where even your prayers to God can't escape and the destination is utterly final.

The U.S. has SO been "that savage"
....think: Abraham Lincoln and John F. Kennedy. How did THEIR Presidencies end?