Reconnaissance when a camera won't be good enough

A decade ago, I reported on a US military request for proposals for new and improved surveillance technologies, incorporating:

"... an all-weather, day-night approach for use when electro-optic techniques are ineffective. The concept would utilize one or more distributed airborne platforms, and is capable of imaging an area of at least 5 by 5 miles, at least 1 foot resolution, with 0.5 Hz updates. Typical footprints are centered between 5 and 100 miles from the airborne platform. The desired output would be video-like radio frequency (RF) imagery of static and moving objects. Typical targets include urban structure, vehicles, and dismounts. Typical environments are urban and littoral areas with moderate to high density vehicle and dismount traffic, strong discrete scattering, blockage and shadowing. It is strongly desired to develop a solution that builds upon, and/or upgrades, an existing military RF sensor capability."

According to a report in Flight Global, that effort and others like it may have borne some pretty remarkable fruit.

The US Air Force (USAF) tested the use of synthetic aperture radar for bomb damage assessment on 15 December 2020 at Nellis AFB in Nevada.

“Operating in Europe or the Pacific we can expect weather and the need to remain beyond the operating range of current electro-optical and infrared sensors due to threats,” says Major Derek Anderson, director of operations for 706th Fighter Squadron. “[Synthetic aperture radar] maps allow manned and unmanned platforms to image target areas from long ranges and through weather.”

Speedily confirming destruction of a target could save expensive flight hours, bombs and missiles as well as limit time within range of enemy fire. Moreover, USAF fighters and bombers could then quickly move to other targets.

The precision of synthetic aperture radar images has improved dramatically since I last visited the topic.  Here, for example, courtesy of Sandia National Laboratories, is a Ka-band image of military vehicles in the desert near Albuquerque, New Mexico.  This is obviously cropped and reduced in size:  to see the full-size version at Sandia's Web site, click here. 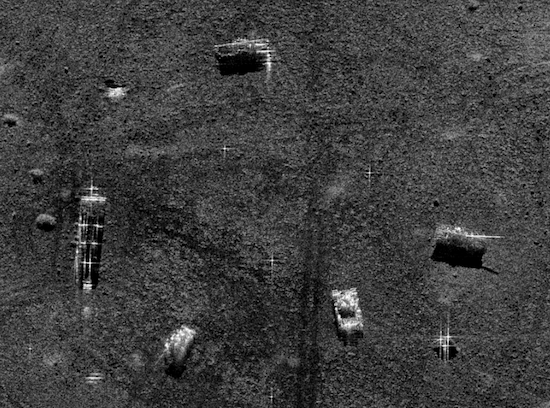 Another example from New Mexico shows parked vehicles and aircraft on static display at Kirtland Air Force Base (again, cropped and reduced in size).  The source comments:  "Note that the aircraft are better defined by their shadows than by their direct echo return." 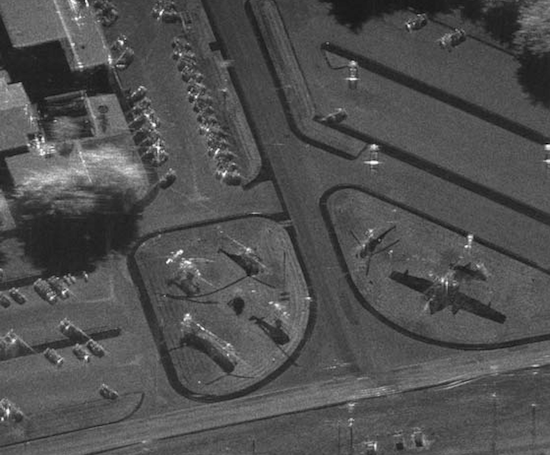 Note, too, that images available to the public are almost certainly greatly reduced in resolution and precision compared to those available to the US military.  It would make no sense for the armed forces to show potential enemies how capable their current technology might be.  If the USAF can use synthetic aperture radar to assess bomb damage to individual vehicles from dozens, scores or hundreds of miles away, that's precision at least an order of magnitude greater than what we can see above.

It just goes to show:  Big Brother is almost always able to watch you, whether you're in darkness, under cloud cover, or concealed in almost any other way.  Modern technology strips us of most of the protection from observation that previous generations took for granted.  We saw that most recently in the fighting between Armenia and Azerbaijan, which we discussed last October, including video evidence.

Yep, definitely degraded from what the military actually sees...

I worked around SAR stuff 15 years ago... they were this good with 1 plane then. Notice, however, that all of these targets are in open areas - I wonder how they are dealing with the foliage problem?

In these photos, the illuminator is not the receiver. That's probably a really good thing, as I don't imagine the illuminator will have a healthy lifespan once it is activated in a high intensity conflict.

Here's a recent video by Scott Manley that explains SAR and it's limitations.

4And they worshipped the dragon which gave power unto the beast: and they worshipped the beast, saying, Who is like unto the beast? who is able to make war with him? 5And there was given unto him a mouth speaking great things and blasphemies; and power was given unto him to continue forty and two months. 6And he opened his mouth in blasphemy against God, to blaspheme his name, and his tabernacle, and them that dwell in heaven. 7And it was given unto him to make war with the saints, and to overcome them: and power was given him over all kindreds, and tongues, and nations. 8And all that dwell upon the earth shall worship him, whose names are not written in the book of life of the Lamb slain from the foundation of the world. 9If any man have an ear, let him hear. 10He that leadeth into captivity shall go into captivity: he that killeth with the sword must be killed with the sword. Here is the patience and the faith of the saints.