I had to laugh at one response to a British man's tweet about firearms.  Paul Samuel asked on January 16th: 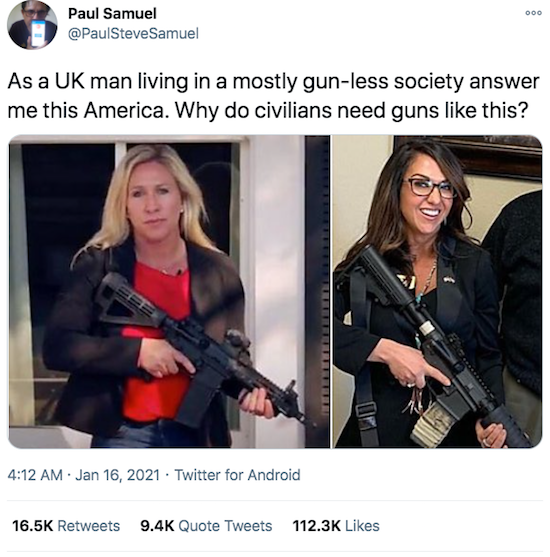 Many of the responses were supportive - but this one put things in proper perspective, IMHO. 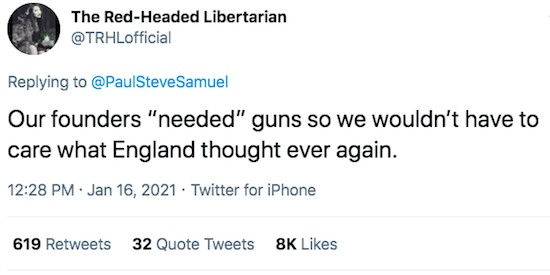 As so many commenters have pointed out for so long, owning a firearm isn't a question of whether we need one, or even if we want one.  It's a natural right, rather than merely a legal right, and predates the US constitution (which recognized that natural, pre-existing right rather than conferring it - big difference!).  Anyone trying to prevent us exercising that right is going to run into all sorts of resistance, whether they like it or not.  It matters not whether they approve or disapprove.  That's the bottom line.

2263 The legitimate defense of persons and societies is not an exception to the prohibition against the murder of the innocent that constitutes intentional killing. "The act of self-defense can have a double effect: the preservation of one's own life; and the killing of the aggressor. . . . The one is intended, the other is not."

2264 Love toward oneself remains a fundamental principle of morality. Therefore it is legitimate to insist on respect for one's own right to life. Someone who defends his life is not guilty of murder even if he is forced to deal his aggressor a lethal blow:

If a man in self-defense uses more than necessary violence, it will be unlawful: whereas if he repels force with moderation, his defense will be lawful. . . . Nor is it necessary for salvation that a man omit the act of moderate self-defense to avoid killing the other man, since one is bound to take more care of one's own life than of another's.

2265 Legitimate defense can be not only a right but a grave duty for one who is responsible for the lives of others. The defense of the common good requires that an unjust aggressor be rendered unable to cause harm. For this reason, those who legitimately hold authority also have the right to use arms to repel aggressors against the civil community entrusted to their responsibility.

Most, if not all major religions have a similar perspective on our right to self-defense, and (of necessity) our right to possess the tools necessary to exercise that right.  Kinda puts things in perspective, no?  What's more, paragraph 2265 above doesn't only apply to governments and their agencies.  Parents hold the moral authority to defend those in their care against attack;  and each of us holds the moral authority to defend ourselves and other innocent persons against attack.  Since all of us "legitimately hold authority" in that sense, we also have the right to use the necessary tools to do so.

It's also in the Torah.

Shalom from up north.

From that Twitter comment, most of us in the 2A community used to a long time ago answer such questions in "good faith" but have figured out since then that most of the time the question isn't asked in good faith and it quickly devolves into a comments about our manhood and other comments. so we usually assume*Pardon the Pun* that the person is a troll and answer accordingly. If the question is asked in good faith, most of us will give intelligent answers why we have rifles such as those and it boils down to politely *Because we can*.

I had a guy from the UK with me in TN. We stopped for breakfast in some restaurant in Shelbyville that had old firearms and deer heads on the walls. He asked if I thought any of the people had firearms on them. I told most probably did or had them in their vehicles. He asked why. I said I think they heard the British were coming. He was not amused.
BTW I had a Sig P239 on me but didn't tell him. He was upset enough.

Well, we still have our God-given rights. Until they get stripped away even more by the national socialists coming into power.

Bad enough that our God-given rights have been reduced to a pittance of what they were.

We were British subjects. What he said was...the REDCOATS are coming.

No one can deny us the right to advanced weaponry. Militia rifles were superior arms compared to British muskets. Rifles won the Revolutionary War. Benedict Arnold built his own NAVY and delayed/defeated the British aims at Valcour Bay.
Citizens should own any and all arms afforded to the government. All military members swear allegiance to the Constitution. Therefore, in theory, all arms available to the government ARE in the hands of the people.

Now you know why the Constitution is just a piece of paper according to our elected officials.

And once again, the 2nd Amendment isn't just about guns. It's about all weapons of war. Warships, cannon, explosives, knives, swords, maces, axes, etc, etc, etc...

Amazing how often this little document gets ignored relative to America's founding:

Kind of gives some idea about what the thinking of the day was, even prior to the DoI.

Euro-weenie is content is his serf-ness. Guess they are regressing a half-dozen centuries or more. And we should care what said Euro-weenie thinks, why?

The 2nd Amendment is the difference between citizens and subjects. With as much as we've lost of the 2A, we are more subjects than citizens.

My answer? How's that election going for you? Will you ever trust elections again?