I was struck by a tweet from Glenn Greenwald a couple of days ago. 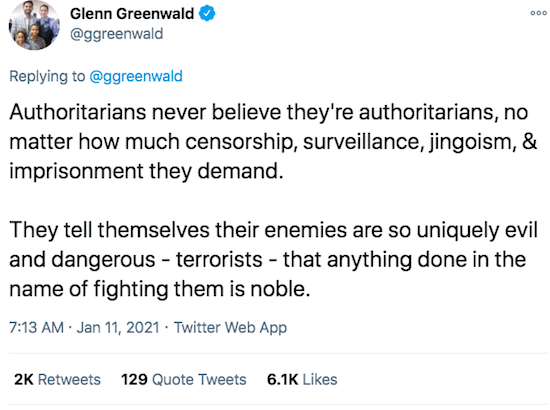 Of course, there were no "terrorists" in Washington D.C. last week.  I've spent years fighting terrorism.  I've written about it many times - see here, for example.  I understand terrorism from all-too-harsh personal experience.  What happened in Washington was a Sunday school picnic by comparison.  However, it'll be used by those clamoring for greater government control as an excuse, a reason, to ride roughshod over our constitution and the rights it recognizes - just as 9/11 was used as an excuse to enact the Patriot Act and other obscenities against our human and civil rights.

If Mr. Greenwald's words sound familiar, it's because we've been warned about that sort of thing by wise men for many years.  Take Daniel Webster in the 19th century.

C. S. Lewis also reminded us of the reality of this situation.

Let's give Daniel Webster the opportunity to sum it all up. 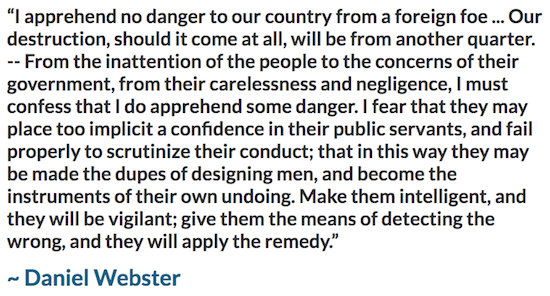 Sadly, the incoming Democratic Party administration appears to be utterly disregarding these prescient warnings.  They know they're right, and they're going to see to it that they do what's right, and we'd better get with their program - or else!

Note, too, that the US educational system - which has given us AOC, and BLM, and Antifa, and any number of other useful idiots - is the antithesis of Senator Webster's last sentence as quoted above.  We've allowed our educational system to "dumb down" our children until they no longer know how to be vigilant, or detect the wrong:  so they won't - they can't - apply the remedy.  Instead, they'll welcome the chains our "ruling class" seek to impose upon them in the name (but not the reality) of all that is good.

The rest of us are just going to have to ensure, by hook or by crook, that the pendulum swings back the other way as soon as possible.  This has nothing to do with either the Democratic or the Republican Party.  It's about our foundations as a society and a constitutional republic.  They must be restored - but both parties will try to prevent that, because they both seek power above all else.  They're both following Rahm Emanuel's famous dictum:  "You never want a serious crisis to go to waste. And what I mean by that is an opportunity to do things that you think you could not do before."

Both political parties mean to use the electoral fraud of November 2020, and last week's (largely manufactured) "crisis", to destroy President Trump's legacy and the populist movement he's inspired.  They'll willingly sacrifice him, and the constitution, and our human rights and freedoms, if it gives them more power.  That's their only concern.

Ronald Reagan reminded us of the dangers inherent in their approach.

Gird up your loins, dear readers.  There's work to be done.

We need to accept the fact that there is no voting ourselves out of this since the members of both parties are basically traitors to America at least at the national level.

We'll see how the Texas legislative session goes this year. I'm happy to vote for secession; I certainly have few fellow Americans that have life or property I would want to defend.

"We'll see how the Texas legislative session goes this year. I'm happy to vote for secession"

Of course, the key issue there is "How many divisions has Texas?" because ain't no way, no how, the new lords in DC ever gonna let Texas leave, and given that they already have a significant military presence *in* Texas, and given that Mexico is absolutely certain to not want a major war on its border, the odds of secession - even with a successful vote therefor - seem remote, to say the least.