Regular readers will recall that I've often mentioned Second City Cop, a blog written by anonymous Chicago police officers (whether serving or former isn't known).  For years they've given accurate, incisive and (frequently) derisive information about how law enforcement in the Windy City is - and isn't - working, as well as commenting on the foibles and idiocies of that city's administration.  They've taken great care to preserve their anonymity, for fear of retaliation.

A few days ago, Second City Cop suddenly "went dark", available only by invitation.  Many of its fans, including yours truly, wondered whether the authorities in Chicago had finally found out who was behind it, and had retaliated against them.  It seems they haven't done that yet, but they were getting close.  The authors of Second City Cop released this statement.

Well, this was certainly a long time coming. Fifteen years, over 22,000 posts, almost two million comments and God knows how many attempts to silence us. But it might finally be over…at least this version of it.

Over the weekend, we received information from a contact at Google that internal chat/e-mails led them to believe that certain precautions we had taken over the years had been breached by Google. We had gotten similar warnings from others in the past, and we dealt with or ignored them as the situation warranted. But this one was different.

And this one – on the heels of Big Tech’s wholesale attack on the President, Parler and center-right to right-leaning authors, politicians and voices – pointed to a countdown that had far less time than we had thought. Most likely, far less time than you think, too. The blacklisting has begun, even if you won’t see it. You should – the wholesale abandonment of the President, the denunciations, the, “I wasn’t really with him” self-serving statements. Sound familiar? It should…if you have any recollections of the show trials behind the Iron Curtain, in Southeast Asia, in assorted Middle East kleptocracies.

Disavowal and re-education is on tap. What Senator McCarthy is remembered for – “Are you now or have you ever been…” has been twisted, refined (Bake that cake!), and exacerbated (Parler is only the first of many). They don’t want “unity.” They want Compliance and as the last fifteen years have shown, we aren’t really good at compliance. The amount of personal data available to “woke companies” who would deny commerce or service based on beliefs, contributions, investments (not Green enough!), social media posting, employment (cops not welcome here), bumper stickers – Have you heard of Operation Choke Point? Look it up and imagine it drilled down to individual citizens. Orwell’s 1984? It’s here.

In closing, we’d just like to thank a few people:

We have a few hundred e-mails waiting for us, begging for info, and all we can say right now is, “We don’t know.” We don’t know if this is it, we don’t know if we’ll return. We don’t know what Big Tech has in store for us and the political winds are not fortuitous. We are exploring options and we’ll leave it at that.

In the meantime, everyone reading should make these sites the first place you go for news and educated opinion:

Watch your backs boys and girls. And your fronts. No one else will.

This is a sobering turn of events for those of us who try to print the truth as we see it.  It's entirely possible that Big Brother will unleash similar pressures against us.  I've had to stand up against unprincipled, unjust, corrupt authority in the past, and I daresay I'll continue to do so, because I take my principles seriously - but I'm retired, and don't have a job or career to worry about.  Others don't have that luxury.  It's a conundrum all of us in the blogosphere, and everyone using social media, will have to confront sooner or later.

As Thomas Paine so succinctly put it:

THESE are the times that try men’s souls. The summer soldier and the sunshine patriot will, in this crisis, shrink from the service of their country; but he that stands it now, deserves the love and thanks of man and woman.

Tyranny, like hell, is not easily conquered; yet we have this consolation with us, that the harder the conflict, the more glorious the triumph.

What we obtain too cheap, we esteem too lightly: it is dearness only that gives every thing its value. Heaven knows how to put a proper price upon its goods; and it would be strange indeed if so celestial an article as FREEDOM should not be highly rated.

It's sad to see that his words are as applicable to our times as they were when he published them in 1776.  The enemies of freedom, the enforcers of conformity and persecutors of "thoughtcrime", are still alive and well.  Our forefathers had to take a stand against them.  It may well be that we're going to find ourselves following their example, and against odds as seemingly overwhelming.  Still, that goes with the territory of being an American.  The values for which we stand are, indeed, worth fighting for.

As President Lincoln put it: 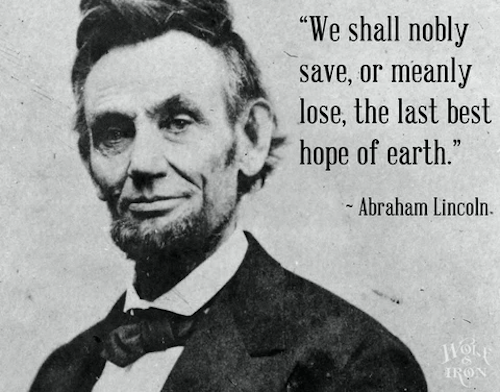 Our thanks to the authors of Second City Cop for their many years of hard work in that endeavor.  The rest of us will learn from their example.

Thanks Peter. I check them first thing every morning and was dismayed when they went dark. I appreciate the update. So sad. Please stay with us.
My partner has gone all orange-man-bad and critical-race-theory, my kids have been brainwashed into wokeness at college, and I'm made to feel like an intransigent fossil at home. Sites like yours help keep me grounded. Thank you for all you do, and please keep the light shining.
Jennifer

In the endless chatter from the coming administration, we keep hearing of coming truth and reconciliation commissions.

Peter, did you live through one of those in Africa?

Your opinions about the process and things to beware of would be helpful for the naive in the west.

NFO back up for me now.

I am actually afraid to share this post for fear of highlighting the good blogs to the wrong people.

Be safe and God bless us all.

It's coming to all of us. Brave new world, BRM.

I never imagined a city could be so incompetently run. It was very eye opening.

Incompetently run? No. SCC showed that what happens in Chicago is what was intended to occur.
I'm going to miss them. I checked them daily.
John in Indy

There's a strong tendency to conflate the actions and behavior of HUAC -- the House Unamerican Activities Committee -- with those of SENATOR McCarthy.

McCarthy only set out to find communists in the Truman admin -- and, yes, in fact, there actually WERE communists in the admin [Since revealed in the post-USSR Venona Papers], despite the caterwauling denials of the Press -- yeah, even then, back in the 40s and 50s, they were already working to undermine America.

HUAC were the ones doing the blacklistings, the "investigations", etc.