New Army helicopters make progress, as do their tactics

In August 2018, and again in December of that year, I raised some tactical issues about the competitors for the US Army's Future Vertical Lift program.  I noted:

From a purely tactical perspective, looking at the likely size of available landing zones, and the ability to set down and lift off as close as possible to the fight, I'd say the Sikorsky-Boeing SB-1 concept is going to be a lot more flexible than the Bell V-280.  I'm not knocking the latter's capabilities, of course;  I'm sure it'll be a very good aircraft . . . but that's not necessarily the only consideration.  From a combat utility standpoint, I think its sheer size will impose limitations.

There's more at the link, including diagrams of the size of the landing area taken up by each design.  The images of each aircraft below are courtesy of Wikipedia. 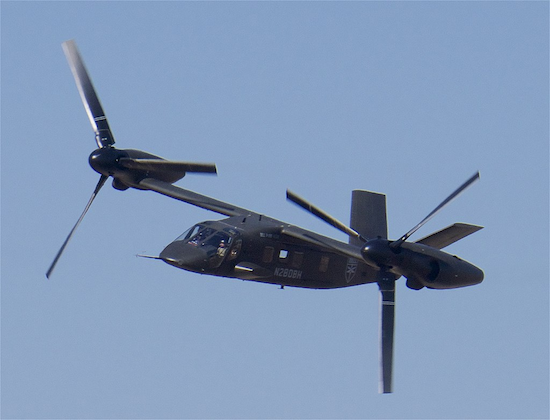 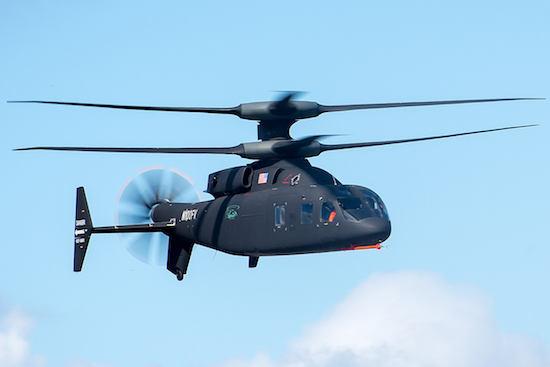 Sikorsky-Boeing have just released details of the proposed production variant of their SB-1 Defiant, called the Defiant X, after having flown the prototype for over a year.  They're making the same point.

Pitted against the production version of the Bell V-280, which has an advantage when it comes to maximum speed due to its tiltrotor design, the Sikorsky-Boeing team argues that the Defiant X will be better suited during the final approach phase.

That is partially due to the Defiant X’s reversible pusher propeller, which can rapidly reverse pitch and act as a sort of air brake to slow and then stop the rotorcraft in a hover. The companies also argue that the smaller rotor diameter of the co-axial helicopter, compared with the V-280, will allow it to fly in tighter formations and will enable more aircraft to fit in a landing zone.

In fact, the Defiant X fits within the same footprint as the Sikorsky UH-60 Black Hawk utility helicopter that it is intended to replace, says McBryan. That means the US Army won’t have to make many changes to accommodate the new aircraft, she says.

I was interested to see the emphasis on landing flexibility, of course, after my own (limited) exposure to that issue.  However, an announcement by the US Army, only 24 hours after the Defiant X report, raises a number of other tactical issues - some of which I hadn't seen coming at all.  Landing flexibility may not be the only, or even the primary consideration in selecting a new medium-lift helicopter.

China poses several awkward challenges for the US Army.

First, the US Army is a land-based military service and China is an ocean away. Second, the wide-open spaces of the Pacific Ocean would seem to make it more difficult to hide in-bound helicopters and tiltrotors from radar.

Nonetheless, the US Army is making the case that its Future Vertical Lift aircraft, combined with clever tactics, can bring something unique to the Indo-Pacific region. The service thinks its in-development Future Long Range Assault Aircraft (FLRAA), a replacement for the Sikorsky UH-60 Black Hawk utility helicopter, and the Future Attack Reconnaissance Aircraft (FARA), to replace the retired Bell OH-58 Kiowa Warrior scout helicopter, will create new dilemmas for the Chinese military.

New flight automation technologies will enable these rotorcraft to fly faster and closer to the surface of the ocean than ever before, it says. New missiles and loitering munitions will increase the aircrafts’ lethal reach. Tactics, techniques and procedures to match will create a new dimension to joint warfare within the US Indo-Pacific Command, says Brigadier General Walter Rugen, director of the Future Vertical Lift Cross Functional Team within US Army Futures Command.

The challenge is that the Pacific Ocean offers few obvious places to hide. Over land, rotorcraft can hide from enemy radar in river valleys, behind hills or between buildings. The featureless expanse of the ocean seemingly makes spotting, targeting and firing at rotorcraft much easier for units armed with surface- or air-to-air missiles guided by radar or infrared sensors.

The US Army acknowledges there are fewer obvious places to hide over the ocean, but insists there are ways to avoid detection and enemy fire.

There isn’t going to be a single cloaking agent for US Army rotorcraft. The service has outlined a plan to use radar hiding techniques, in coordination with an overwhelming joint force, decoys and electronic warfare, to protect aircraft. “You’re seeing the army and Army Aviation come into a space with electronic warfare that it hasn’t been in since the Cold War,” says Rugen.

Novel air-launched effects, a sort of multi-purpose drone launched from FARA, will act as reconnaissance platforms, decoys, radar jammers and even loitering munitions many miles in advance of FARA. For example, in August and September 2020, during its Project Convergence exercises, the service practiced using the Area-I Altius-600 air-launched effect, which has a range of 238nm.

Ultimately, the US Army wants FARA and FLRAA to be closely integrated into a joint force that includes the US Navy, US Marine Corps and US Air Force. All of the services plan to practice futuristic concepts later this year as part of the Project Convergence 2021 exercises, says Rugen.

More at the link, going into a lot more detail about the concepts mentioned.

If high-speed approaches from seaward are part of the US Army's envisioned mission mix, that may well change the equation for selection of its new helicopters.  The disadvantage of the larger landing zone needed by the Bell V-280 Valor might be offset by its increased speed relative to the Sikorsky-Boeing Defiant X.

I'm long out of the loop when it comes to military aircraft design and tactics, despite my earlier exposure in that field.  I must admit, I'm fascinated to read about the off-the-wall, way-out-there theorizing being done as to how aircraft can be used in new and novel ways to accomplish missions that would never have been dreamed of during my military service.

I suppose it's a bit like the early days of commercial computer usage.  If one computerized too fast, one risked automating an existing administrative disaster (as many companies found out to their cost).  It made sense to wait, given the size and complexity of the investment required - but then technology overtook that.  As mini- and micro-computers proliferated, it became dangerous not to computerize, because of the advantages offered by the new technology.  If you didn't use them in your business, but your competitors did, they'd destroy you in the marketplace as customers sought out the most efficient, effective suppliers.

In military terms, the same tipping point appears to have been reached over the past couple of decades.  It used to be that a competent, well-trained military could deter attack or mount an efficient defense even if it didn't have the latest and greatest equipment.  Now, as we saw most recently in the conflict between Armenia and Azerbaijan last year, technology is a game-changer.  The side with the best technology is most likely to win, because it can destroy the enemy without them being able to stop it - even if the enemy's armed forces are larger and (on paper) more threatening.

The US Army appears to be adopting a similar approach to its new helicopters, and all its other weapons systems too.  It can't match China in numbers, and it has to deal with geographic limitations in any potential conflict;  so it's reorienting its technology to take account of those limitations, and overcome them.  Similarly, the US Marine Corps is radically reorganizing itself in the light of those same realities (often to the distress of former Marines, who fear their beloved Corps is becoming a pale shadow of its former self - but they may not be taking new strategic and tactical realities into account).

This will bear watching.

military budgets will be cut under the regency

The new hotness for funding with buzzword bingo is Pacific Ocean for the army.

Based on exactly zero military experience (but I am a student of history) I find the idea of a helicopter assault on mainland China over the ocean to be a recipe for disaster. Aside from the detection issues
(that may or not be solvable), the relatively short range, and troop fatigue from a long ride in either a V-280 or a Defiant X are likely unsolvable in any VERTOL platform. If we are serious about using technology to compensate for the PLA numbers, we need to develop weapon systems that can reduce their effectiveness from a remote location. Nazi Germany tried the technology versus numbers game with the Soviet Union in WWII, it didn't work that well for them

We have not conducted opposed amphibious landings in over 70 years, and have not attempted same against a near-peer for 75 years.
And helicopters are quite plainly restricted to permissive environments.

Compounding this is the fact that the country, and the military is broke, even though our credit card is still being accepted.

That will not last forever.

We've taken over a quarter century to semi-field one obsolete Thunderjug, which overcosts and underperforms, wildly.

I will be dead of old age and cold long before the Army sees either of those prototypes, or any other, adopted and flying, if such even ever happens.

The Marines are for operations against the 130 nations that cannot oppose us, or for stiffening things up against those who do.

In any event, we haven't got half the ships we had on D-Day in the entire Navy, nor will ever again.

Our best hope against China is to starve it of dollars, instead of transferring our wealth there by the shipload.

They'll kick and fuss, but even more so than the former Soviet Union, they won't be able to sustain themselves if they try to buy guns and butter.

We would be far better served by rebuilding our decrepit naval forces, and letting a hollowed our Army rest and replenish after two fruitless forever-wars.

Spend the money on training, spare parts, restocking war stores, and such, and leave the get-rich schemes of the military-industrial complex for new toys on Santa's to-do list for another decade. We don't need them, and cannot afford them, nor will be able to anytime soon. Possibly not ever.

Now, if someone is willing to cancel welfare, student loans, Medicaid, and ObamaCare to pay for new ships and helicopters, we can talk.

I ain't holding my breath.

But by gum, we'll hold the line at Guam!

Seriously, the military brass bragged about undermining civilian control, and *this* is what they came up with?

No.
Japan and Taiwan could probably assemble nuclear weapons in minutes. Maybe as long as an hour or two. It might take the RoK a week to get their hands on them.

So, in the dictionary under "pyrrhic victory", we find...

If you want the helicopters to survive in a ship to land assault, you need to hold the high ground in electronic warfare and counter measures.

If you want to invade mainland China, you need your head examined.

Shortsighted based on our ongoing ops down range, where there is 'unlimited' room to land a chopper. The Army doesn't remember Vietnam/jungle ops. As others have said, this will be another exercise in futility, as the administration will kill/gut the programs to the point that they are an 'exercise' and nothing else.

I wonder how many Chinese CCP agents work at Bell and Siskorsky?