A Hong Kong activist shows dissidents how to cover their tracks

It's sad to think that normal, ordinary, everyday Americans who respect what our Founding Fathers wrought, and want to "support and defend the Constitution of the United States against all enemies, foreign and domestic", and "bear true faith and allegiance to the same", may have to "duck and cover" to do that in this politically correct day and age.  To be identified as "moderate" or "conservative" in many US cities and towns these days is to invite at least shunning, if not active retaliation.  The progressive left appears bound and determined to demonize anyone and everyone who won't subscribe to their pathetic, overreaching, domineering credo.  "Resistance is futile!  You will be assimilated!" appears to be their war cry.

That being the case, a series of tweets from a democracy advocate in Hong Kong advises fellow activists on how to remain relatively anonymous and unidentified in their struggle against the Chinese Communist Party and its state organs.  I'll put up three of them as examples.  Click each image for a larger view. 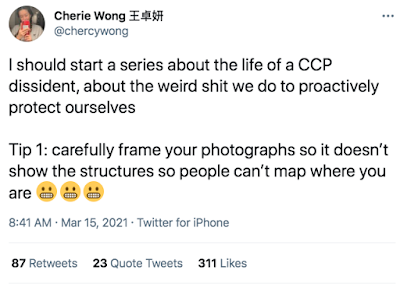 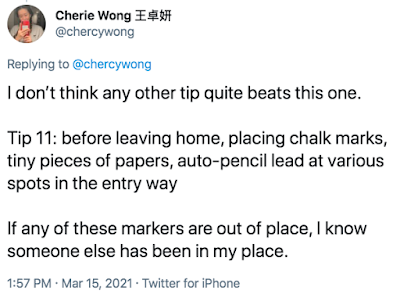 There are a dozen or so tweets in all.  If you prefer a single-page consolidation of all of them, without graphics or visual interruptions, Threadreader has it here.

Based on my own knowledge of "opsec", which was fairly extensive in its pre-Internet, pre-cell-phone day but is somewhat out-of-date now, Ms. Wong offers good advice.  If you live in a part of the USA where being anything but progressive or left-wing will attract opprobrium, they're useful guidelines to follow.

Don't take your phone to places you don't want known. The GPS reciever tracks even when switched off, and can report/ be recovered later.
If you must post pictures, remove the metadata first.
Pay cash when possible / necessary. Facemask, hat, and generic dark glasses may be helpful on occasion.
John in Indy

Buy a cheap point-and-shoot camera for your photos. Edit them before posting. NO geo locating cameras, obviously.

Firecapt beat me to it. Cellphone pics are geotagged (and may be "helpfully" uploaded to "the cloud", i.e., Big Brother's servers). New, feature-filled cameras may have GPS so they can geotag your photos, which is very much a nice feature for vacation snaps but is a definite misfeature for anything potentially controversial.
Be mindful of backgrounds and incidental faces; you don't want to publish anything that connects you to a future unperson.

Does wrapping a "smart" phone in aluminum foil work to cancel the GPS? (Asking for a friend.)

Sam, you don't have to wrap the phone in aluminum foil, though that would work. A Faraday bag will work and can be sealed and unsealed much quicker than foil. However, a metal can with a metal lid will also work just as well.

Pepperidge Farm sells these things called "Pirouette" chocolate pastry sticks. (They're pretty good and can be gotten at just about any grocery store.) The small size comes in a metal can that's about 4 inches in diameter and 7 inches long - just the right size for all but the biggest cell phones. When the phone is inside the can and the metal lid is on tight, absolutely no signal gets in or out.

It's quick and easy and beats foil hands down. You can seal the can in less than a second and unseal it just as fast if you need to use the phone, though it will take a minute or two for the phone to reestablish its connection to the network.

You don't even need to switch the phone off, but bear in mind that any phone inside a Faraday cage - which is what this can is - will run the battery down quicker as the phone keeps trying to pair to a cell tower it can't find.

If the phone will be in the can for a long period, turn on "Airplane Mode" orshut it off to save the battery.

if you can get a phone with a replacable battery, you can be sure it's off by removing the battery

The GPS may still track you if you do a software disable of GPS tracking, but if you actually turn the phone off, it's off.

"if you can get a phone with a replacable battery, you can be sure it's off by removing the battery
The GPS may still track you if you do a software disable of GPS tracking, but if you actually turn the phone off, it's off."
------------
I would not trust this to be true, especially with newer phones, and especially with tablets. The larger the body, the more space is available.

It would be easy for the maker to include a capacitor or backup battery to run the phone for tracking purposes, or to record conversations near it. Just because you think a phone is off because you used a switch, does not make it so.
Also, it is possible for your phone to be turned on remotely, without it being obvious to you.

I suspect that phones may be able to track movements with accelerometers when it can't get a signal. This may not be current tech. If not, expect it to be available at some point.

Does anyone remember the .pcx image file format? It was invented well before the availability of geotagging and other extended info within a jpg file format. (See https://en.wikipedia.org/wiki/PCX) It's a relic of a bygone era these days, but Photoshop and other software can still save to it.

So, if you can save to .pcx, that's as good as it gets for comprehensively stripping out unneeded metadata from the image. These images can then be opened and sa-saved to another format.

Some photo-editing software allows editing the metadata. If you remember to edit it, you can change the geotag to put the photo location somewhere interesting, such as inside the Moscow Kremlin (where GPS is, I believe, jammed, making such a geotag somewhat less than credible). Or Groom Lake, or the Wuhan Institute of Virology. Sorry, but only Earth locations are supported, so the Imperial Palace on Planet Mongo is not an option.
There's probably a Perl script out there somewhere for batch-munging JPEG metadata (proper name EXIF)... maybe ExifTool is the thing?

Have at her, Comrade Xi!

The HK Situation is 'Complicated' and most HK Protestors were not Pozzed and had genuine grievances about demographic swamping by mainland immigrants (not PC that, so not reported in West) and gross misrule by local Quislings-- just that any protest/biffo will always attract the AntiFa and other Soros people -- a fact which China is now gleefully hyping as they repress all protestors.

Her countermeasures are a bit amateurish -- especially the cyber stuff. Rob Braxman is worth a look for dissidents who insist on carrying cellphones.

Check out Rob Braxman “the privacy guy” on yt and on https://odysee.com/@RobBraxmanTech:6/welcome-to-the-rob-braxman-tech-channel:5 for excellent info and tips for techies and non-techies. Check out his tip on browser isolation.

Perhaps this doesn't need saying, but just in case: the most important thing you can do to protect yourself is: don't say stupid things, and don't do stupid stuff. And don't let someone tempt you into doing either.
Stupid things that people say: "[____] is a traitor and should be executed." "We need to muster at the county courthouse with our guns and take back our country now!" This sort of statement is normally just a gust of hot air, but ... it won't sound so clever when read out by a Progressive prosecutor to an unsmiling jury of suburban moms.

Stupid things that people do: fall for the "I can get us some [machine guns, dynamite, ricin]..." line. The person proposing this is working for the government, and has been schooled in how to elicit felonious statements and behavior without technically doing 'entrapment'.

Note also that the anonymity of the web has given Russian trolls enormous opportunities to try to stir up violence in the US. The word "boogaloo" is Russian for "Americans are idiots, so easy to fool."

So: get that AR15 while you can, organize with friends to be able to defend your community if necessary, don't get suckered into provocations or statements that can be twisted by the MSM into support for 'white supremacy'.

No one knows the future and it doesn't hurt to be prepared for all eventualities. But the enemy at the moment is working through the official system, first of all the legal system, while at the same time he is hollowing out the police and military. We must not abandon this terrain to him.