Saturday snippet: "Don John of Austria is going to the war"

The naval Battle of Lepanto in 1571 was a turning-point in the struggle between East and West, between Christianity and Islam.  It was also the last major naval battle involving primarily oared vessels, the galleys and galleasses that were the descendants of ancient Greek and Roman biremes and triremes.  After Lepanto, the Age of Sail became predominant.

Lepanto was hugely important because it put an end to the formerly crippling threat of Turkish invasion of Western Europe by sea.  There would still be wars between Christian and Islamic nations, but they would be generally smaller in scope, and the fate of continents would not hang upon them.  The victory of the West at Lepanto was an immense relief to all the kings and rulers of western Europe, allowing the Renaissance to continue to flourish, and in due course reshape that continent.

The undoubted hero of the battle was Don John of Austria, the illegitimate son of the Holy Roman Emperor, Charles V.  He commanded the Western fleet during the battle, and gained fame throughout Europe for his victory.  Also present was Miguel de Cervantes, later to write Don Quixote, widely regarded as the first modern novel, and earn literary renown.

An excellent book about the battle, highlighting its overall strategic and geopolitical importance as well as its tactics, is Jack Beeching's "The Galleys at Lepanto". 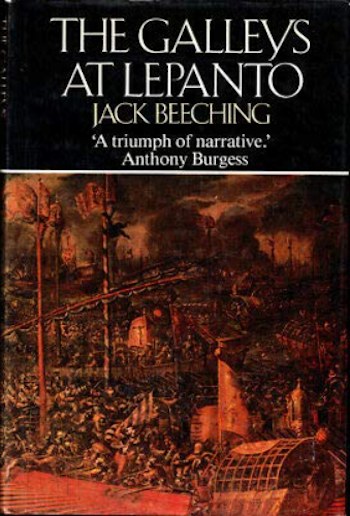 Sadly, it's long out of print, and used copies aren't cheap:  but if you can find one at an affordable price, it's an excellent book.

Today I'd like to bring you not a book about the Battle of Lepanto, but a poem.  Gilbert Keith Chesterton was one of the foremost thinkers of the early 20th century, in both the religious and secular spheres.  His exchanges with George Bernard Shaw are memorable.

Chesterton wrote his well-known poem "Lepanto" in 1911.  He intended it to be - and it was well received as - a martial ballad, to inspire the nations of Europe with the memory of their victory over outside forces so long ago.  It was published during World War One, and used to encourage and motivate British soldiers.  Even today, more than a century after it was written, it hasn't lost its power to arouse.

A rousing paean to past glory, and a call to remember a victory so dearly and bloodily won.  As we face the enemies of our own civilization today - inspired by a godless, nihilistic, atheist philosophy to which they cling with a fervor resembling nothing so much as religious fanaticism - it's worth remembering the example of our forefathers . . . and following it.

We memorized this poem in the eighth grade. A true classic!

"An excellent book about the battle, highlighting its overall strategic and geopolitical importance as well as its tactics, is Jack Beeching's "The Galleys at Lepanto"."

There are still a few copies floating around.

A classic, no question!