When light itself becomes a weapon

A few months ago, I ran across an article about "tactical" flashlights and weaponlights.  Since I have more than a few of each, I read it with interest.  I was intrigued by its description of a very powerful Streamlight Protac HL5-X unit, offering up to a claimed 3,500 lumens output. 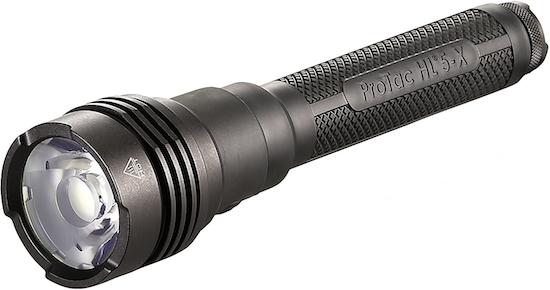 I didn't trust the claimed light output - I've seen many such claims, most of which bear no relation to reality.  However, the reviews seemed to indicate that it lived up to the hype, so I took the plunge and ordered one.

It's bigger than the average "tactical" flashlight, comparable in size (about 10 inches long) and weight to a two-D-cell Maglight.  I got the version with two rechargeable 18650 batteries (which can also accept 4 CR123 batteries if desired, although light output then drops to a claimed 2,500 lumens).  I found it took 4-5 hours to charge the two cells to full capacity.

By the time they were ready, it was dark, so I took it out into our back yard to test it.  HOLY ****!  This thing is BRIGHT!  It puts out so much light that it could function as a weapon in itself.  If you were facing it, I reckon you wouldn't be able to look at or past it at all - you'd be blinded for sure.  It threw light for several hundred yards, and I found I could see movement and recognize shapes at 250-300 yards - astonishing performance from a handheld flashlight.  Miss D. found it so bright that it gave her a headache in strobe mode, even though not pointed at her.  (I've been strictly instructed not to use it around her except in emergencies!)  I'd say it's more powerful than most common vehicle headlights.

Here's a short video demonstration of the HL5-X in its three modes - full power, strobe, and low power.  (I've set mine to permanent full-power mode, for simplicity's sake.)

I would have said that it's too bright to use indoors on full power, for fear of blinding oneself;  but a couple of days ago, I was sorting small components (springs, roll pins, etc.) into containers, and dropped a few (to our cats' grateful enthusiasm, as they chased them around).  It was wonderful to have such a bright light on hand.  Against our dark brown laminate flooring, pins and springs, no matter what color or how small, stood out like a sore thumb when illuminated by this incredibly bright beam.  It made retrieving them a snap.  For that purpose, it's a superb tool to have.  For house-clearing when one hears a bump in the night . . . not so much.  On full power, it's simply too bright for that, IMHO, and you risk blinding yourself from unexpected reflections.  (Outside in the yard is another story.  It's likely to blind any intruder very effectively, particularly using its strobe feature.)

For everyday serious use, hand-held or rail-mounted, the lower-powered (500 lumen), more compact and more economical Streamlight 88062 ProTac 2L-X remains my go-to light.  For pocket carry 24/7/365, the very-low-cost Hatori mini LED flashlight, in its one-AAA-cell or two-AAA-cells versions, gets my nod - its performance is adequate for everyday needs, and it's so cheap that if you lose or break one, it won't make you cry.  However, when you need a lot of light to identify something or someone at long range, or highlight tiny things on a dark floor, the big HL5-X is worth its price, IMHO.  I'll probably add a second unit to carry in my vehicle, just in case.

As somebody who has used light as defensive weapon successfully more than once, I need one of this!

That Amazon Wish list is getting longer and longer...

Yeah. Tried a Surefire 6P about 15 years back, and wondered how bright it could really be, having played with the brightest MagLight offerings prior.
...
The giant purple blob in my vision disappeared after a couple of hours.

The stuff they've come up with lately are positively blinding.

Dumb question, if it's dark and there's an armed intruder, he can't see me and thus can't point his gun at me and shoot me, right?

But if I turn the flashlight on him, what's to stop him from shooting at the light source?

I'm feeling the need for a new flashlight after reading this post.

Firearms doctrine for my branch of Homeland Security was to use the light very briefly and move after you used it.

Flashlights have come very far since the days of incandescent bulbs and carbon batteries.

Miguel, read yesterday's post and buy it elsewhere. Hopefully you're just using the Amazon Wishlist as a shopping list.

Frog, what John said. There is a brief moment when the attacker is disoriented because he was not expecting light and you were. That moment is when you move and/or react. Also, you have the advantage of being able to move in the dark because it is your property and (hopefully) you are very familiar with where obstacles are. If not you should be. There's a good chance that he will be carrying a light of his own rather than blunder around in the dark on unfamiliar territory. Your light serves to disorient and identify so that you don't shoot the neighbor unless he really needs it.

"Flashlights have come very far since the days of incandescent bulbs and carbon batteries."

Yeah, but I can still hit someone with my 4-D Maglite. Try that with any of the new flashlights. 😁

Sounds like a great flashlight for outdoors sporting use.

As far as an "intruder in the home" situation goes - it's your house. Turn the lights on if you can. Yell loudly. Your defense attorney will thank you later.

Peter, I have a question about the user controls - is this one of those lights that requires the user "step through the options" when it's turned on, or is there a way to pre-select the SAME setting each time?

If I need light I need a LOT of it RIGHT NOW and don't want to play with buttons to get the "bright light" option, nor do I want a light that resets itself to a different option when I turn it off. I have a Surefire that has that feature - the on/off switch alternates between "dim" (map reading, simple foot navigation) and "bright" (full power) and it's infuriating to have to keep fiddling with the button to get the "bright" response. Consequently, the @&$% thing lives in my toolbox, not anyplace where I might need a consistent response from the light.

Yes, light can be used as a weapon,

I like the use of light to defuse a situation. Few people are at home in darkness, and being able to shed SOME light on a situation often helps. Showing light also can deter some criminals and keep confusion from becoming anger.

I have scuba diving friends who have temporarily blinded themselves with 4,000 and 8,000 lumen scuba diving lights; light can definitely be a weapon! Additionally, at these brightnesses it has no lasting effects so is quite a useful non-lethal option.

I have an OLight 1200 lumen light on my rifle and I can recognize targets at 200 yards with it; it was $79 when I got it on sale. I consider it overkill except for distance use.

A note on 18650 batteries: there are many low quality ones, and outright fakes, out there. I have had poor success with them and use CR123 batteries instead. If you find a reliable source fr 18650s, please let us know.

With a light that bright, the intruder is the deer in the headlights, and anything he shoots at will be unaimed "to whom it may concern", fired eyes wide shut.

And the range will be hot in both directions at that point, giving him some additional things on his mind besides shooting. Some of them involving a change of his underpants.

Also, not keeping the light at your own center of mass is a big help.

@Unknown # 4B, Jr.: Yes, you can set most Streamlight models to operate in a single mode whenever you activate them. You don't need to scroll through all the options every time.

@Jonathan H: I use Streamlight's own 18650 cells. They've proved reliable in my use. See:

Have a high powered handheld similar to that. On full bright it gets HOT. Seriously hot. And damn fast too. Even my EDC mini, used for peering into dark recesses of aircraft innards, gets hot enough to be uncomfortable after even a short time.

My Terralux equipped MagLites are envious. Maybe for my birthday or Christmas.

In this situation you always hold the light with your arm fully extended to the side.

Seems few, if any, of you have taken a nighttime/dark environment firearms course.

If you can see your opponent is armed, you don't need your light unless you can't see your weapon sights.

If it's really so dark you need your light to FIND and IDENTIFY the intruder, why would you then turn it off to move, whether you shot or not? He, or they, are ALSO going to move, entailing the entire "locate and decide to shoot" routine all over again.

But, NOW they have been warned and are more ready for your actions. Multiple opponents in this situation complicates the hell out of you re-lighting them. Bad guys tend to travel in packs.

We were taught that if you turn on your light, whether hand or gun mounted, LEAVE IT ON, until you have solved your current problem. Time can be critical for you, don't waste it trying to be cute. This includes waving your handheld light to the side. You should be using that hand to assist you in controlling your gun's recoil. That's a time saver, yes?