In a recent presentation, Jeff Gundlach pointed out the dilemma inherent in government handouts.  Consider these two charts from the presentation (click the images for a larger view): 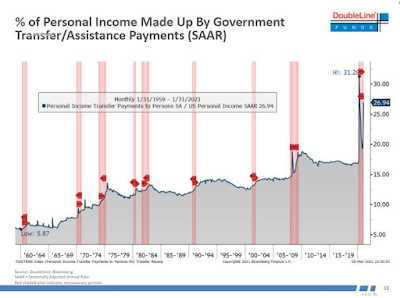 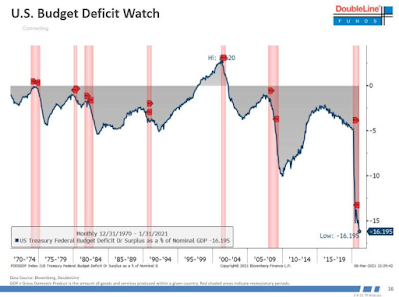 He claims that 27% of the average US household's income is now derived from government benefits/handouts.  However, in order to pay that (including COVID-19 stimulus programs), the US federal government deficit has ballooned.  In so many words, you can't have one (handouts) without the other (deficits).

Gundlach also points out that the vast majority of the US budget is currently funded by borrowing (i.e. deficit spending).  He says:  “80% of the budget is borrowing, so why bother with taxes at all?”  That's not a bad question.

And yet, in a world where a quarter of all personal income comes from the government, stimulus programs need to be kept going because consumers have been “trained” to rely on them. Hammering the point that people could become dependent on these stimulus programs, he said that this is something that tends to be associated more with Europe than the U.S, and warns that we could be seeing a “neverending” aid regime stateside.

Welcome to socialism with American characteristics - perpetual universal basic income for everyone, courtesy of a reserve currency... while it lasts.

That's a very important point.  Right now, if all government COVID-19 stimulus payments were ended, it's possible that as many as a quarter of all US households would not be able to make ends meet.  They simply don't have enough savings or financial reserves to make it month-to-month without that assistance.

The pandemic is the ultimate excuse for the active destruction of the U.S. economy. Stimulus measures have devolved into helicopter money being thrown about haphazardly as billions are siphoned primarily by major corporations and through fraud. People who are clamoring for a $2,000 relief check from the government have no idea that corporate welfare has been ongoing for the past year along with billions in retroactive tax refunds. All of that money printing is going to cause damage somewhere. It cannot be avoided.

Think about that for a moment – federal and state governments crushed the economy through lockdowns, then offered the solution of vast stimulus measures. This in turn is destroying financial stability and generating rapid price inflation.

Conservative states and counties that refused to shut down are recovering at a much faster pace than leftist states which imposed draconian restrictions on citizens. Yet, the lockdowns did nothing to stop the spread of COVID-19 in blue states. So, the lockdowns accomplished no discernible advantage for the public, but they did give the central bank a perfect rationale to further erode the dollar.

This resulting price inflation is something that not even the red states can escape.

The majority of commodities continue to see price inflation across the board. Food and energy prices have been creeping higher for the past year. Governments are once again blaming the pandemic and “stresses on the supply chain,” which may have been a believable claim nine months ago, but not today. Anything to hide the fact that all that stimulus has inflationary consequences.

Dollar devaluation is the most visible in terms of imported goods. In other words, it costs more dollars to buy goods outside the U.S. as the value of the dollar falls. And since the majority of U.S. retail is supplied by foreign producers, this means that average American consumers will suffer the brunt of inflationary consequences. Public stress and anger will be high.

The effect of what Mr. Smith forecasts, of course, will be an even greater dependency on government to provide some form of income that will help ordinary citizens cope with the worsening economic environment.  He concludes that the powers that be "want economic disaster. They do not want people to have the option of taking care of themselves. They need people scared, desperate and malleable, or they will never achieve their Reset agenda."

That's a scary thought . . . but it fits the available facts and statistics.  Looking at what the World Economic Forum wants and expects from its highly controversial Great Reset proposals, it's hard to argue that anyone in the First World in his or her right mind will accept that agenda unless they have no other choice.  However, if it's impossible to survive in our ragged, tattered First World economies without government assistance, that's a powerful tool for Big Brother to twist our arms into accepting it.

I highly recommend reading Brandon Smith's article in full.  It's worrying, but may be prescient.

We are watching the stealth implementation of Modern Monetary Theory.

Looks like we Red States may need to fall back on the Constitution again. After all, it clearly states:

Article 1, Section 10
No State shall enter into any Treaty, Alliance, or Confederation; grant Letters of Marque and Reprisal; coin Money; emit Bills of Credit; make any Thing but gold and silver Coin a Tender in Payment of Debts; pass any Bill of Attainder, ex post facto Law, or Law impairing the Obligation of Contracts, or grant any Title of Nobility.