To destroy the right, make people more dependent on the left

Friend and fellow blogger and author Old NFO put up this image on MeWe over the weekend. 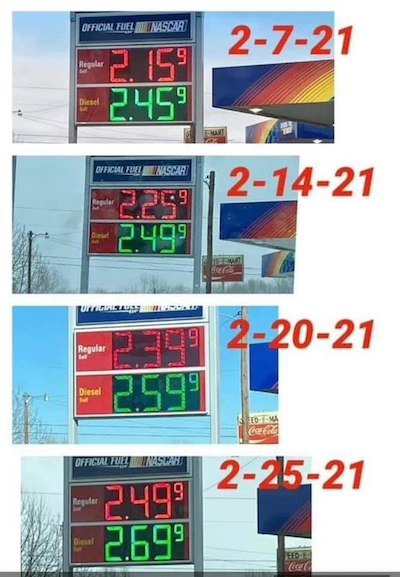 I'm sure many readers could put up similar images of the increase in gasoline prices during February 2021 in their area.  In case you were wondering, the increase is the direct and immediate consequence of President Biden's revoking of many of President Trump's executive orders offering incentives to greater (and cheaper) energy production in the USA.  The Biden administration is shackled to progressive far-left-wing influences, and they want this.

Why would anyone want to make the American people pay more for the fuel that's at the foundation of every level of our economy?  Because more of those American people voted for Trump than for Biden.  Never forget - the 2020 Presidential election was not won, but stolen by the Biden campaign.  We've already gone into the details since then, so I won't waste your time by repeating them here.  The progressive left knows it has to change the foundation of US politics if it's to pry support away from President Trump.  It's trying to do so by imposing equal misery and need on as many of us as it can.  It's a deliberate policy.  If people are happy and well-off, they won't support a tax-and-spend, "vote-for-us-and-we'll-give-you-more-handouts" regime.  If they're suffering and desperate for help, the hope is that they'll support those who promise the most help.

The evidence for this goes way back.  Remember Bill Maher in 2017?

I feel like the bottom has to fall out at some point. And by the way, I’m hoping for it. Because I think one way you get rid of Trump is a crashing economy. So please, bring on the recession. Sorry if that hurts people, but it’s either root for a recession or you lose your democracy.

He was far from alone in saying that.  Last year, Kristin Tate observed in The Hill:

The economy under Trump has made gains every month. Any deviation from low unemployment, strong wage growth, and gross domestic product growth would assist his opponent.

Democrats would reap the whirlwind, potentially causing mayhem before taking office, then using a 2021 recession to seek broad new fiscal powers. This is similar to the 2008 election and the failed regulation and stimulus plans under Obama during 2009, which gave the country eight years of recession and poor economic realities.

Almost every executive order Biden has signed so far is directed at producing that outcome, either by undoing a positive policy of President Trump, or by imposing a negative policy that (under the smokescreen of progressive wet dreams like the so-called "Green New Deal") will only add to our economic burden, directly and/or indirectly.

Note, too, the efforts to penalize states that aren't closing down in the face of the threat of COVID-19.  Florida has been extremely successful in managing the threat, yet it and other states are being pressured to adopt the (failed) policies of major "blue states" like New York or California.  I regard that as a Trojan Horse attack on states' rights.  "We have to do this for the sake of public health!"  The facts that it's unconstitutional, not demonstrably necessary, and fundamentally impractical to enforce, are never mentioned.  It's all about control.  "Do as we tell you, or else!"  The COVID-19 pandemic is nothing more than an excuse to grab more power while the grabbing's good.  Does anyone seriously believe that, if they were allowed to do that, the federal government would ever voluntarily relinquish that power?  Nope.  They'd simply invent the next excuse to grab even more.

When you look at any policy of the Biden administration, think of one word that's behind all of them:  CONTROL.  By hook or by crook (mostly the latter, IMHO), the progressive left is determined to seize every scrap of power it can, in an attempt to prevent the right wing from ever again regaining control.  They won't back down;  so neither should the right.

We're playing for all the marbles.  If we lose this game, we'll never see them again.  So, we'd better win . . . or be prepared to pay the cost.

Many traditional Americans are sleepwalking into a conflict they are not mentally prepared to handle. The ideals of blind justice and due process are now, for all intents and purposes, quaint relics, and relying on constitutional rights for protection is dangerously naïve.

Like it or not, we live in a police state, controlled by an increasingly authoritarian regime with near-total electronic surveillance. The national security apparatus views conservatives and free-thinkers as domestic terrorists, and there are now more military deployed in our nation’s capital than in war zones overseas. If America were any other country, it would be considered a non-permissive environment—not a free country.

The pundit class recommends midterm elections and unifying the GOP as remedies, but they ignore the real elephant in the room—representative government is not representing us. While conservative and independent voices are censored and banned from the community square, their elected representatives cower behind their desks and make sweetheart deals with the new regime.

... traditional Americans are now in a race for time ... One cannot get small enough or anonymous enough to avoid the tyranny and oppression associated with authoritarian regimes. Do not delay. Always keep in mind the adage no one is coming to save you.

Remember, you have the power and are now responsible for your own liberty.

Max Morton says we "must take action". What kind of action?--ken

An American Pinochet? File under "someone is coming to save us."

The progressive left's worst fears were realized when President Trump made his public appearance at CPAC. I fully expect them to make every effort to somehow silence him as it's now obvious that he will be a thorn in the side of the current administration from now on.
Their first attempt was of course that ridiculous chit show of a second impeachment, unconstitutional and doomed to fail, but still being touted as their best attempt to shame Trump, and it might have worked had he been a typical Republican. News flash, he ain't.
No telling to what lengths the left will go in the runup to the midterms. Historically the party in power always looses a bit and with the margins already so thin the expectation would be that the Repubs regain the Senate and likely a majority in the House. This is an existential threat to the left's power so every effort will be made, both fair and foul, to prevent it from happening. Expect this year and next to be a flood of dirty tricks. And should they cheat and bully their way to a win in 2022 it will be proof that both Democracy and representative government has died in these United States of America. Then time to welcome our new Banana Republic, and I don't mean that booghie clothing store.