Yet again, police act against someone defending himself

Last year, I wrote two articles outlining the danger of defending oneself in an environment where law enforcement and prosecution authorities were actively biased against legitimate self-defense, and in favor of left-wing protesters, demonstrators and rioters.  They were:

In so many words, I emphasized that one would have to be as discreet as possible in defending oneself, because the authorities in such areas would be motivated to act in support of the true guilty parties, rather than help the true victims.

Now comes this news from Salem, Oregon.  Click the image for a larger view, and follow the link to watch the video. 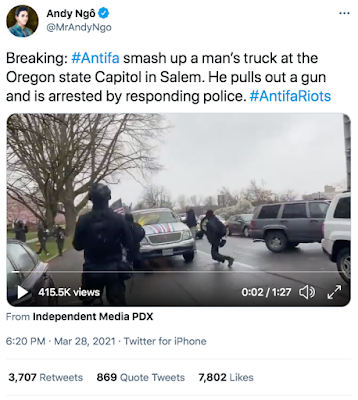 I'm not going to argue the legalities of the situation under the law as it pertains to Salem.  I don't know all the ramifications of Oregon law, or of Salem's city regulations and ordinances.  They may prohibit the carry and/or use of firearms for self-defense, or impose a duty to retreat, or whatever.  I'll simply point out that the driver was unquestionably defending his property and himself in that situation - yet he ended up being arrested, while the rioters who deliberately damaged his property seemingly got off scot-free.

Is that justice?  Hell, no, it isn't!  Nevertheless, it was the reality of the situation on the streets of Salem yesterday - and in many other jurisdictions right now, such as Portland, OR;  Seattle, WA;  Minneapolis, MN;  and far too many others.  If you openly defend yourself, you're more likely to be arrested than your attackers, because the authorities want locals to be cowed into submission.  They don't want individuals acting for themselves.  They want subjects, not citizens.

I think most readers of this blog will join me in a hearty one-finger salute to such authorities.  Fortunately, I live in an area where I'm likely to receive the support of law enforcement when I act in accordance with its precepts;  but many of my readers are not.  To them, I can only suggest re-reading my two earlier articles linked above, and planning accordingly.  If the driver of that pickup had not been there, he wouldn't have had to defend himself, and would have avoided all the subsequent fuss and bother.  Plan ahead, know where trouble is more likely, and avoid such areas like the plague.  It can pay dividends.

In such jurisdictions, if you have no choice but to act, try to do so as discreetly as possible, so as not to draw unwanted official attention to yourself.  On the other hand, if you simply have to act because you have no other choice, you may as well do so as strongly as necessary, because you know you're for the legal high jump anyway.  "In for a penny, in for a pound", as the old English idiom goes.  If I knew my attackers were going to be protected by the law, while I would be demonized, what would I have to lose?

It's very sad that I have to give such advice . . . but that's the reality on far too many of our streets at present.  In too many towns and cities, we can no longer trust law enforcement and the judicial system to be on the side of the law-abiding.  Political correctness has trumped justice.

Maybe defunding the police is not such a bad idea. If they are going to be Antifa’s bitches. they should get their funding from them and stop milking the taxpayer.

I discovered many years ago that Progressive authorities have no inclination to deter aggression; rather, they determine "perpetrator" and "victim" status based on positions in the social hierarchy as defined by doctrine (which often ends up being inverted relative to the actual hierarchy as experienced by ordinary people). Facts of a particular case are of no consequence.

There's gonna be some victims that need a laugh to face the work week!

Peter when you are obedient to the laws WRITTEN by "Woke" Criminals what do you expect? Those POLICE are FOLLOWING ORDERS. Where did I hear that phrase before..

Hitler had his Jews, the "Woke" Socialists have their Cis Gendered White People afraid to be called racist-homophonic and so on.

racist
[ˈrāsəst]
NOUN
a person who shows or feels discrimination or prejudice against people of other races, or who believes that a particular race is superior to another.
"the comments have led to her being called a racist"
synonyms:
racial bigot · racialist · xenophobe · chauvinist · anti-Semite ·

I predict that until the EBT cards and other Government Stimmy fail to FEED the families NOTHING will happen no matter all the hot air blowing around the internet.

Then what? The system is finally crashed and the erratic self serving Socialist efforts to "Govern" will just increate the problems.

Peter you lived though that scenario. Aside from fleeing to a "Stable Country" like the FORMER USA what are our options?

Around 34 seconds, did he signal someone to call the cops?
The guy pulled his gun, clumsily racked (the gun was pointed down range in the process) but did not aim at anyone and kept the handgun pointed downwards.

According to Andy Ngo, the guy was let go.

@Chris Nelson: The memes are coming. Check back a little after 9 a.m.

"such as Portland, OR; Seattle, WA; Minneapolis, MO; and far too many others." Please LEave Minneapolis in Minnesota (MN). Don't move it to Missouri (MO). We don't want it.

The perps actually serve the state's purpose by causing fear.
People who are afraid will give up their rights.

One minor correction- Minneapolis is in Minnesota, state abbreviation MN. MO is Missouri, and we ain't having it with any of that Minneapolis crap. We've got enough idiots running things in the major cities, but at least here we haven't handed over the state offices to those aiding and abetting such idiocy.

"Harry" states an uncomfortable truth, in such places, the "Powers that be" use "Antifa" and other "Black Blocks" to instill fear in the populace so they will will surrender more of their rights to the government for "protection", it is a symbiotic relationship. The only thing you can do is leave the area if possible and move to a more friendly location.

As a lifelong resident of the peoples republic of Oregon, I want to emphasize that the conditions in Salem and Portland DO NOT reflect the reality on the ground of much of the rest of the state. Yes, the demoncrat dominated state gummint is trying its best to gin up a civil war, and they may yet get their wishes granted, but some of us live where the local sheriff has gone on record about not enforcing any unconstitutional dictates from Salem.
I lived in Portland for my undergraduate years in the 1970's and loved it. I will now do my level best to never set foot there again. If I have to travel through it, it'll be on the I-205 and I won't be stopping if I have a choice about it.
I'm afraid that I have little sympathy for the guy driving the truck. Even if he's let go after arrest, his truck has been badly damaged. Will comprehensive or collision cover it? Hopefully he, and others, can learn a powerful lesson from the incident as we do also with blogposts like this. Thanks Peter.

Ergo, he was pointing a gun at the wrong thugs.

This is a swell way for the Salem police to be properly and justly added to the "shoot on sight" list from here on out, for good cause.

Just a hunch, but if they suddenly experienced a sharp drop in live officers over a short time frame, the remainder would probably evidence a sudden urge to stop the nonsense, but in either event, there'd be less of them to worry about.

And remember the immortal words of Pa Clanton in My Darling Clementine: "If'n you're going to be dumb enough to point a gun at a man, you better be smart enough to use it on him."

If they're going to treat you like a wolf no matter what, might as well be hung for acting like one. And when the state violates the law, that's textbook anarchy. Let the citizens thereabouts enjoy the fruits of that choice, with seconds, and see how they like it.

Be a real shame if prosecutors thereabouts wound up on the "no pulse" list too, wouldn't it? It's not like lawyers are an endangered species or anything.

Any time you use or threaten to use deadly force you should expect to be arrest or at least detained. Sorry but if you understand that up front things will go smoothly. The State controls the use of force except under a few very special cases like self defense of life, grave bodily and in some states arson. (yea Kentucky). No defense of property is going to slide without you taking a ride downtown and YOUR LAWYER doing to talking.

So go to an Andrew Branca course or the equivalent understand your rights and what not to do, stay polite and calm and weather the storm.

@Unknown: You're ignoring the fact that the Antifa rioters, who caused the incident, inflicted the damage and assaulted the driver, WERE NOT ARRESTED. They got off scot-free. That's a miscarriage of justice if ever I heard of one.

Does not help that the 'leadership' is in session right now passing bill which will make it a felony to be in the vicinity of a public building armed, and a CCW cannot be used as a defense. Oregon is still mostly conservative, but the I-5 corridor is communist from top to bottom.

Look on the bright side.

The more that grotesque subhuman filth like the Salem Gestapo show their true colors, the more former 'blue lives matter' folks (like how I shamefully was back before January) will realize how horrifically misguided they've been.