Fans of wacky sports will be delighted to learn that the 2008 Gloucester Cheese Roll went off superbly, despite muddy terrain. 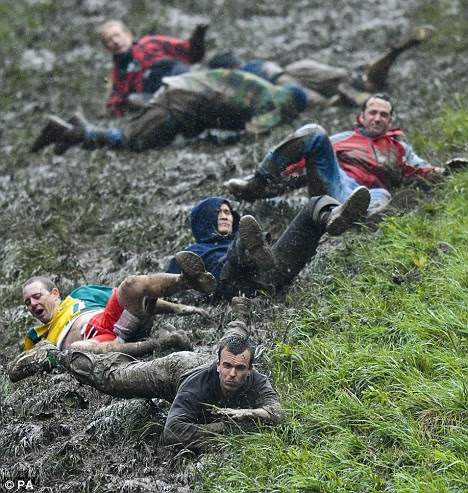 Torrential rains over previous days turned the course into a slippery nightmare. On the other hand, injuries were fewer than in previous years, probably thanks to contestants being cushioned by mud. 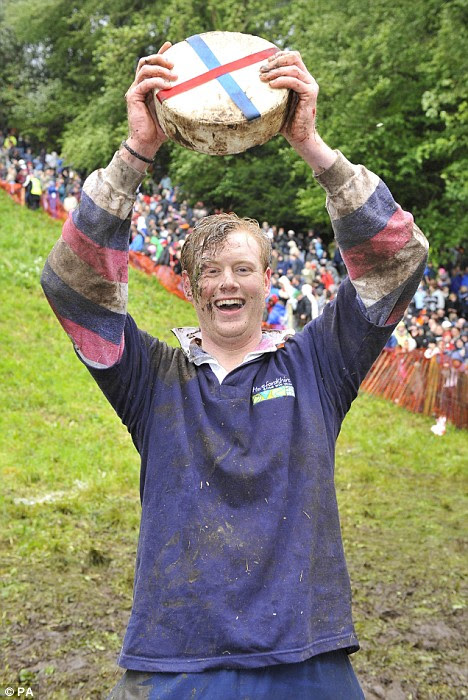 The Cooper's Hill Cheese-Rolling And Wake is a long-standing tradition in Gloucestershire, at least 200 years old. A cheese is released from the top of Cooper's Hill, and contestants race to be the first to catch it at the bottom. Speeds of up to 70 mph can be achieved, so injuries aren't infrequent. Indeed, it's not unknown for particularly speedy (or inept) contestants to reach the bottom of the hill before the cheese, as this video clip from 2007 illustrates.

The event has an official Web site, which is already preparing for the 2009 race. The local BBC station has a special section of its Web site devoted to the contest, including several video clips.

Here's a longer video clip, showing several of the 2007 races. I'm sure the 2008 event will be on YouTube within days.

All I can say is, whilst I love Gloucester and Double Gloucester cheese, I'm damned if I'm going to chase one down a hill! I'll just buy mine at the supermarket, thank you very much.

I'm suprised that the Health and Safety twits haven't put a stop to the Cheese Roll.

Perhaps the thrill of the hunt enhances the flavor of the cheese. I know it seems like a terrible idea but I'd probably do that in a heartbeat.