Every so often, someone comes up with a gadget that makes my brain go into buy-it-NOW mode, telling me, "You gotta get this!" 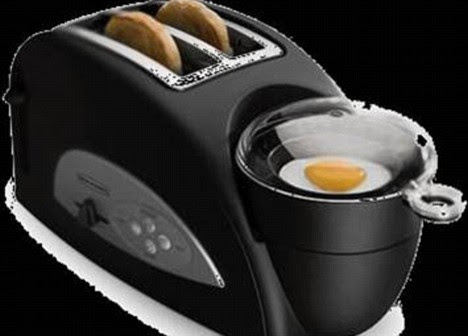 A toaster with a built-in egg steamer has gone on the market to ensure that clock-watching commuters can tuck in without missing their train.

The Toast n Egg from Tefal poaches the eggs while the bread toasts alongside.

It follows the firm's ActiFry fryer, which makes enough chips to feed a family of four with one spoonful of oil, and the QuickCup hot-water dispenser.

The toaster and egg-steamer inone costs £39 and Tefal claims the gadget will revolutionise breakfast time.

It comes with a poaching tray and toaster slots, and also boasts a steamer tray to hard-boil eggs and a warming tray to heat precooked meats. After carrying out tests on the gadget, the consumer magazine Which? said: 'First impressions are promising.'

Now, if they'll just produce a model for the US market - and if they'll make one that poaches two eggs at once - I'll be all over it. (In case you hadn't noticed, I'm a big fan of poached eggs on toast.)

Peter,
They do make it here; we have one and use it regularly. Poached egg on toast? Three minutes start to finish, with negligible mess. Buy here:
http://www.amazon.com/Back-Basics-TEM500-Muffin-2-Slice/dp/B000B18P96

YIPPEE! Thanks, Leatherneck, Diamond. It's on my shopping list for next week!

If it has a car adapter, I can sell my house.

I have one of these, too. It makes pretty decent sausage/egg/cheese muffins!